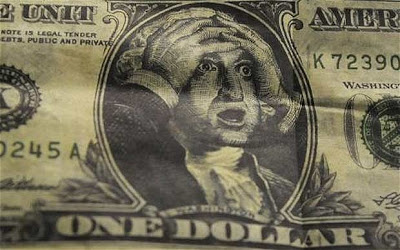 OMG. The Republicans’ default threat. Image from Reuters.
What will the GOP demand in
return for raising the debt ceiling?

The Republicans have used the threat of shutdown to make excessive demands. So far, the public has not rewarded their cynical efforts with contempt and revulsion.

For months Republicans have been threatening to shut down the government if they don’t get what they want as payment for voting to raise the debt ceiling. This is a strange situation because they overwhelmingly control the House and have the responsibility for rounding up the votes to raise the ceiling. The people who are supposed to be producing a solution are threatening legislative terrorism as though they were still the minority.

George Packer writes that “the side with a fixed notion of ends and and an unscrupulous approach to means always has the advantage.” Add to this their domination of the public discussion, and it becomes clear why they are likely to get much of what they demand.

Everyone in the financial community seems to agree with Jamie Dimon of JP MorganChase that failure to raise the debt limit would be “catastrophic” and do great harm to financial markets. Despite this, the Republicans have used the threat of shutdown to make excessive demands. So far, the public has not rewarded their cynical efforts with contempt and revulsion.

As The New York Times notes, “the Republicans… now control the federal steering wheel.” They have control of policy, but a huge slice of the public do not understand this and will blame the Democrats for whatever goes wrong. That is why the Democrats have given away so much already.

In setting conditions for raising the debt ceiling, Republicans have several priorities.

Annual increases in the cost of medical services far exceed overall inflation. The nation has rejected single payer health care, which would have contained costs, and the Republicans are bent on scuttling recently enacted savings mechanisms for Medicaid. Even more threatening than the annual increase in the cost of services is the number of people who are eligible for benefits. From 2007 to 2020, that number will increase by one third.

The long term Republican objective is to reduce federal spending to 16-18% of Gross Domestic Product. This provision is the key to their balanced budget amendment. It sets a ceiling of 18%, but the wording is that the GDP figure would be that of the last calendar year within the previous fiscal year. That means that the growth rate of that last calendar year would not be included in the calculations, so the actual spending limit would be set at about 16.7%.

The last time that government spending was at that fraction of the GDP was 1956, a time when Medicare and Medicaid did not exist. Social Security was far less inclusive then. To exceed the spending limit would require two-thirds votes in both houses of Congress. The amendment requires a three-fifths vote in each house to raise the debt limit.

As a down payment on meeting Republican demands, the Democrats gave them $38.5 billion in cuts, which came mainly from the departments of education, labor, and health. Those cuts will come out of the hide of the sick and poor and will also cost hundreds of thousands of jobs.

In addition, the Democrats agreed to provisions designed to hobble the new consumer protection bureau. There will be numerous audits of the agency conducted by the government and private sector entities. Studies will be made to focus on how much regulations cost financial institutions, but there is not one provision calling for studies of whether the regulations do anything of value for ordinary people.

So far, the Republicans swept the field. There were no cuts in defense or in the myriad of programs providing corporate welfare, and every single tax loophole for corporations remained in place. Budget Chairman Paul Ryan, now famous for his plan to quickly starve Medicare and privatize Medicare in 10 years, said he “got 79% of what we wanted.”

Ryan offered a plan that would include all the Republican budget goals. It ends health care reform, makes permanent tax cuts for the wealthy, and privatizes Medicare in 10 years. Its main accomplishment would be sharply reducing Medicaid coverage in many states within a few years. By 2012, the federal government would begin cutting a $100 billion a year from its support of the program.

Ryan would kill the health care reform plan and privatize Medicare in 10 years. People 55 and over would keep existing Medicare. Essentially they are being bribed with good medical benefits in return for stripping their children and grandchildren of Medicare as we know it. In 10 years, Medicare would become a subsidy the federal government mails to one’s health insurer. Each year, that subsidy would buy less coverage, and the person who is covered would pay more out of pocket.

Today, Medicaid is administered by the states, but they must provide certain services to all the people who qualify for assistance. Federal and state money pays for the services, and the beneficiaries might have a small co-payment. Under the Ryan plan, there would no longer be the guarantee that the state would take care of as many people as meet federal criteria.

There will be a federal block grant, and the states will add money. Then the states decide what to do with the Medicaid money. The idea behind block grants is to allow the federal government to avoid assuming the increased costs of medical care. Annually, the block grant might rise by the amount of inflation for that year, but it would fall short of meeting the inflation rate in medical services.

All but four House Republicans voted to support the proposal. However, they ran into stiff citizen opposition to Medicare changes when they returned to their districts. Some said the opposition was mere AstroTurf — not very deep. That may well be true, as they seem able to sell anything to the public these days. Nevertheless, they have decided to defer the destruction of Medicare. It is more likely that they will seek to enact the other part of the Ryan Plan, gradually defunding Medicaid and turning it over to the states through a block grant mechanism.

When the GOP backed away from the Ryan Plan, the party focused on slicing discretionary spending still more and enacting the part of the Ryan Plan that dealt with Medicaid. In the short term, this would not be politically costly as the people most likely to be on Medicaid vote less often than others. Most Americans seem to live under the delusion that Medicaid could not be in their future.

The House Republican Conference, which speaks for 176 members, said it would settle for $381 billion in cuts, $46 billion of which would come from discretionary spending. This would be in addition to the $38.5 billion that has already been accepted.

On May 10, Speaker John Boehner outlined in general terms what the Republicans would demand in return for extending the debt ceiling. He wanted “trillions” in cuts, but he did not say where the cuts would be. He ruled out any tax increases. This far exceeded what the Conference wanted and must be seen as an effort to appease his Tea Bagger members. He ruled out any tax increases.

Boehner did not mention the financial system near-meltdown or the great recession — both products of Republican policies. He blamed the Obama stimulus for slow job growth and never bothered to refute the Congressional Budget Office finding that the stimulus prevented a much worse disaster.

He ignored a mountain of evidence — some from the impartial Congressional Budget Office — that Obama and the Democrats headed off a recession and promoted economic growth by at least 1% a quarter — by the most conservative estimates. It is almost impossible to find a real economist who would support Boehner. His argument sells because so many understand it is about putting the president in his place, going after the so-called undeserving poor, and repudiating the dreaded liberals.

The final deal on raising the debt ceiling will probably occur in August.

It would appear that President Barack Obama has been maneuvered into a box when it comes to further negotiations with the Republicans. He has said too often that cutting the deficit is desirable, but he has also said he would not endanger the safety net. This leaves him with little room to maneuver. He should be repeatedly pointing out that cutting spending while the economy is weak risks plunging it back into another recession.

House Republicans made it clear they have not given up on Ryan’s plan to privatize Medicare. More than likely, they are waiting until after they gain control of the Senate in 2012, when 23 Democratic seats are up. For the moment, Senate Republicans will avoid doing much with Medicare and will go for huge cuts in Medicaid. In the short run, that may not prevent them from gaining the four or five votes they will need to control the Senate in the election of 2012. In the longer run, more and more voters will come to realize that they and their families are seriously threatened by cuts to Medicaid.

The Democrats need to find a way to hang on until the time when the public comes to associate Republicans with painful cuts in Medicare and Medicaid. The best way to do that is to insist on other ways to cut spending and to demand some revenue increases. Unless they are successful here, they will have helped lock into the conventional wisdom the notion that almost all cuts must come from entitlements and out of the hides of the unlucky, poor, and marginalized.

They must dig in. This is worth risking reelection over.