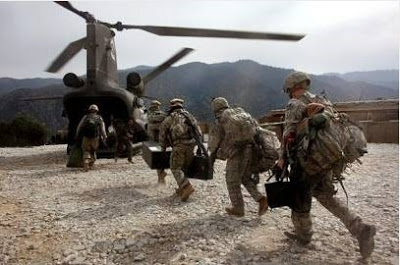 More than 100 retired generals and admirals have signed a letter calling for the repeal of the “don’t ask, don’t tell” policy on gays in the military. They said it’s time that homosexuals be allowed to serve openly in the armed forces. Here, U.S. soldiers board a helicopter in Afghanistan in October. Photo: John Moore, Getty Images.
Ex-Military Leaders Say End Rule on Gays
By Brian Witte / November 18, 2008

ANNAPOLIS, Md. – More than 100 retired generals and admirals called Monday for repeal of the military’s “don’t ask, don’t tell” policy on gays so they can serve openly, according to a statement obtained by The Associated Press.

The move by the military veterans confronts the incoming administration of President-elect Barack Obama with a thorny political and cultural issue that dogged former President Bill Clinton early in his administration.

“As is the case with Great Britain, Israel, and other nations that allow gays and lesbians to serve openly, our service members are professionals who are able to work together effectively despite differences in race, gender, religion, and sexuality,” the officers wrote.

While Obama has expressed support for repeal, he said during the presidential campaign that he would not do so on his own — an indication that he would tread carefully to prevent the issue from becoming a drag on his agenda. Obama said he would instead work with military leaders to build consensus on removing the ban on openly gay service members.

“Although I have consistently said I would repeal ‘don’t ask, don’t tell,’ I believe that the way to do it is make sure that we are working through a process, getting the Joint Chiefs of Staff clear in terms of what our priorities are going to be,” Obama said in a September interview with the Philadelphia Gay News.

The issue of gays in the military became a flash point early in the Clinton administration as Clinton tried to fulfill a campaign promise to end the military’s ban on gays. His efforts created the current compromise policy — ending the ban but prohibiting active-duty service members from openly acknowledging they are gay.

But it came at a political cost. The resulting debate divided service members and veterans, put Democrats on the defensive and provided cannon fodder for social conservatives and Republican critics who questioned Clinton’s patriotism and standing with the military.

Retired Adm. Charles Larson, a four-star admiral and two-time superintendent of the U.S. Naval Academy who signed the statement with 104 other retired admirals and generals, said in an interview that he believed Clinton’s approach was flawed because he rushed to change military culture.

Larson said he hoped Obama would take more time to work with the Pentagon. Joining Larson among the signatories was Clifford Alexander, Army secretary under former President Jimmy Carter.

“There are a lot of issues they’ll have to work out, and I think they’ll have to prioritize,” Larson said, noting that the new administration will immediately face combat-readiness issues and budget concerns. “But I hope this would be one of the priority issues in the personnel area.”

The list of 104 former officers who signed the statement appears to signal growing support for resolving the status of gays in the military. Last year, 28 former generals and admirals signed a similar statement.

Larson, who has a gay daughter he says has broadened his thinking on the subject, believes a generational shift in attitudes toward homosexuality has created a climate where a repeal is not only workable, but also an important step for keeping talented personnel in the military.

“I know a lot of young people now — even people in the area of having commands of ships and squadrons — and they are much more tolerant, and they believe, as I do, that we have enough regulations on the books to enforce proper standards of human behavior,” Larson said.

The officers’ statement points to data showing there are about 1 million gay and lesbian veterans in the United States, and about 65,000 gays and lesbians currently serving in the military.

The military discharged about 12,340 people between 1994 and 2007 for violating the “don’t ask, don’t tell” policy, according to the Servicemembers Legal Defense Network, a military watchdog group. The number peaked in 2001 at 1,273, but began dropping off sharply after the Sept. 11 attacks.

Last year, 627 military personnel were discharged under the policy.

Political observers say that even though the issue may not be as controversial as it was when Clinton addressed it, it’s impossible to forget what happened then.

Larry Sabato, a political scientist at the University of Virginia, said Obama is unlikely to tackle the issue early on. Sabato said he expects Obama to focus on economic recovery and avoid risking the spark of a distracting “brush fire” controversy at the outset.

“I can’t imagine that he will do this right in the beginning, given the Clinton precedent,” Sabato said.

Aaron Belkin, who has studied the “don’t ask, don’t tell” policy as director of the Palm Center at the University of California at Santa Barbara and organized the officers’ statement, said how Obama addresses the issue will be the first test for the new president on gay rights.

“Everyone is going to be interested to see how he responds,” Belkin said.