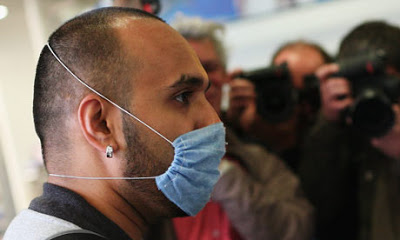 Swine Flu scare: a man wears a mask upon arrival at Gatwick airport in London on a flight from Mexico City. Photo by Dan Kitwood / Getty Images.

With all the sensationalized news about the so-called swine flu flying
around, I figured we’d better set all the facts straight.

1. So far, only 82 cases of so-called swine flu have been definitively identified worldwide, mostly in Mexico (26 confirmed, 7 deaths) and the U.S.(with 40 confirmed, no deaths). (Though about 1600 suspected cases,including 159 deaths, are reported in Mexico.) That does not add up to a pandemic swine flu outbreak.

2. This virus has nothing to do with swine. In fact, it hasn’t been seen in a single animal. And you can’t possibly get it from eating pork.

3. No existing vaccines can prevent this new flu strain. So no matter what you hear — even if it comes from your doctor — don’t get a regularflu shot. They rarely work against seasonal flu… and certainly can’t offer protection from a never-before-seen strain.

4. Speaking of this strain, it doesn’t seem to have come on naturally. According to the World Health Organization (WHO), this particular strain has never before been seen in pigs or people. And according to Reuters, the strain is a “genetic mix”of swine, avian and human flu. Was it created in a lab? We don’t know yet.

5. The drug companies are getting excited… and that’s never a good thing. According to the Associated Press at least one financial analyst estimates up to $388 million worth of Tamiflu sales in the near future –- and that’s without a pandemic outbreak.

6. Let’s not forget that Tamiflu comes with its own problems, including side effects like nausea, vomiting, diarrhea, headache, dizziness, fatigue, cough… the very symptoms you’re trying to avoid. And let’s notforget that Japan banned this drug for children back in 2007, after links to suicidal behavior.

7. Vaccines for this flu strain probably won’t have to jump through all those annoying hurdles like clinical trials for safety and effectiveness. That won’t, however, stop the government from mandating the vaccine for all of us — a very likely scenario. And if the vaccines are actually harmful… killing people, for example…the vaccine makers will be immune from lawsuits.