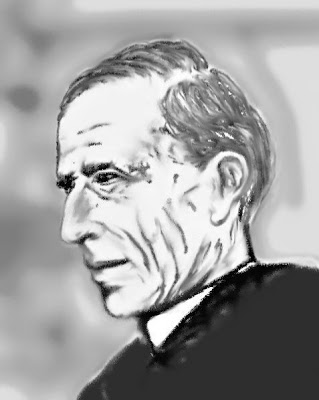 Pierre Teilhard de Chardin was a well-educated French Jesuit priest who first attempted to blend evolution with religion in his book ‘The Phenomenon of Man.’

In his recent article on the “Upcoming Police State,” Chris Hedges mentions that “America is ‘devolving’ into a third-world nation.” This use of evolutionary terminology brought to my mind the name of Pierre Teilhard de Chardin, a well-educated French Jesuit priest who first attempted to blend evolution with religion in his book “The Phenomenon of Man” (2). It is a book highly relevant to nascent Christianity and Democracy and relevant not at all to Roman religion.

One man influenced by Teilhard de Chardin was Van Renssalear Potter at the University of Wisconsin. Van is the Father of Global Bioethics and while his “Bioethics” are based primarily on the work of Aldo Leopold, the Father of Wildlife Ecology — “A Sand County Almanac” (6), it is also based on Teilhard’s The Phenomenon of Man. Teilhard had a tremendous influence on my mentor and thus upon me.

Van was the first person that I ever met who would successfully attempt to plot the evolution of human knowledge out on paper, beginning with the EuroAmerican Enlightenment. Pretty much all that I have accomplished in life is to have extended Van’s 2D view back to the beginnings of Reason in Greece and Nazareth. Now, the evolution of knowledge can be seen as a 3D logarithmic spiral.

Teilhard does not go wrong except when he claims that “Science alone cannot discover Christ. But Christ satisfies the yearnings that are born in our hearts in the school of science. . . Science will, in all probability, be increasingly impregnated by mysticism.”

This is simply not true of Jefferson’s Jesus, because it is so unnecessary. The values of the Christ were formulated with the same dialectic approaches utilized by the Greeks in formulating the values of natural science. Nascent Christianity is born of human Reason not Rome’s religion. There is nothing supernatural about Jefferson’s Jesus.

Teilhard did, however, contribute many new and justifiable words to the English language (6), words which can now be provided greater definition.

Here Teilhard is speaking to Conceptual Evolution in Natural Science, which can now be rigorously defined, from Socrates to Newton to Einstein, which has driven Cultural evolution first in the western world and then the entire world.

With Newton’s Deductive Revolution, the emergence of Jefferson’s Democracy (at the expense of organized supernatural religion) and the Industrial Revolution.

With Einstein’s Reductive Revolution and the Informational Revolution, globalization has been pursued to carry western knowledge all over the world in the creation of a global economy. It is time for another American Revolution on the global stage.

Consider “Cosmogenesis” : Evolution of the Universe

This, of course, is what conceptual and cultural evolution are all about in life and in the world, comprehension of where we came from, where we are at, and where we are all going.

Consider “Ultra-Hominization” : The process of man moving so far forward that Humankind will need a new design and definition

My term for the same phenomenon is the evolutionary emergence of Deity and Heaven on Earth. This can only be accomplished via human rights and democracy.

This would be the sphere of knowledge embraced by post-Einstein natural philosophy which, in turn, embraces Conceptual Evolution in Natural Science and Cultural Evolution in the world.

Consider “Omega Point” : A point in evolution where a “final condition of man” is reached, combining past and present

Here, of course, we are speaking about the “end of times” for the Abrahamic religions, i.e., their removal from the global and local political arenas. We are also talking about the “second coming,” i.e., the emergence of a direct human rights-based democracy on the global stage.

This is clearly a truism. Jesus is the Father of Human Rights, where Jefferson’s Democracy begins, and Jesus and Jefferson are about to go global as we come to recognize that all ancient cultures promote nothing but despotism, to hell with fairness and equality.

I gather much of Teilhard’s insight and inspiration came to him while spending time in a foxhole during World War I some 70 years ago (7,8). That may be the only upside to war. It makes some of us think of peace.

It has been many years since Teilhard’s name has crossed my mind. I have to thank Chris Hedges for his use of evolutionary terminology which triggered my memory.

This entry was posted in Rag Bloggers and tagged Evolution, Humanism, Philosophy. Bookmark the permalink.