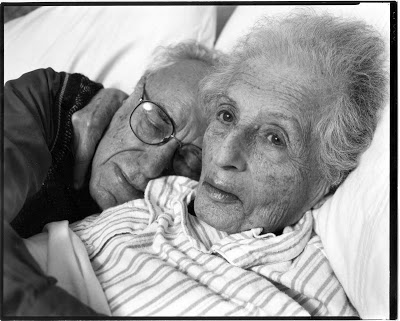 ‘I, as a member of a fading generation, have a few observations about the fate of the aging citizens of the United States in this time of impending economic crises.’
By Dr. S. R. Keister / The Rag Blog / November 11, 2008

As one who has experienced the panorama of our nation and culture since arriving in this world in 1921 I have a few observations that, I fear, will not make the way easier for President Elect Obama, who appears to be a gentleman of intelligence and compassion. To date I have seen little energy expended in addressing this possible impending serious problem.

Since I, as a young student, heard of the disposition of the un-well, elderly in the civilizations of the arctic regions, I have given thought to the ultimate nature of things. In medieval times, and even more recently, the care of the elderly was a function of the family. In the lack of family, orders of Sisters such as the Sisters of Charity and Sisters of Mercy provided care and succor to the infirm and the elderly. However, there has been a stark change in this area since approximately 1980, or perhaps a decade or so previously.

With the advent of the amoral entrepreneur a change has occurred. We have seen the introduction of the capitalist philosophy into the “care” of the aging. We now are faced with a multiplicity of “nursing homes,” “assisted care living facilities” and “retirement homes” in excess in this once caring nation. Before beginning the critique of this hypocrisy allow me to digress a bit.

Social Security and Medicare have made dollars available to the elderly, abetted by the industrial and academic pension plans, the IRA and 401K. We have also been blessed to a limited extent by the hospice movement and the death with dignity laws in Oregon and Washington State. The flip side of the coin is the prevalent, and misunderstood, “non-profit” institution that advertises care for the elderly. Non-profit? There are bona-fide charities which are “non-profit,” i.e. Salvation Army, Red-Cross, Doctors without Borders, etc; however, there is another face to this. There is the “non-profit” institution that personifies the retirement homes, and such, that dot the landscape today.

These are basically tax-exempt institutions, sans stock holders, run by directors, and executive staffs who are salaried as per the board’s discretion, and do not show “profit” in their statements, but instead report “excess income.” Many of these are merely money making machines (MMM) that utilize the “care” of the elderly as their source of profit. The sales departments find it very fruitful, playing on the fears, lack of security, and lack of understanding of the aged. Of course we have a careful check of the old person’s financial statement!

The Bountiful Retirement Home (I made up the name) is one of many “homes” owned by the X-corporation and has been hereabouts for 20 years. Business has been good, as there are many oldsters with first rate stock portfolios. Let us say, as of six years ago, grandma applies for admission with a stock portfolio worth $300,000. She is accepted with alacrity and praised for her wise choice. She is “sold” an apartment of 1000 square feet with kitchenette, for $120,000. The funds are held in escrow returnable to her estate. (The fact, as of six years ago, that she loses the 6% interest on the funds, and that X-corporation is now the beneficiary is not stressed). After her death the moneys go to her estate after the apartment is resold/rerented. Of course grandma can furnish the apartment as she desires.

What else are her entitlements? Electricity and heat are provided, although, there is no emergency generator service in case of power failure, and emergency egress is lacking in a three story building, in which 50% of residents use walking aids, in case of fire.(One pays for one’s own phone, TV, and computer connections.) But there are offsetting advantages. For $3000/month one is provided with breakfast and dinner, the latter in a dining room, though no credit is given if one misses a meal when eating out with family or friends 2-4 evenings per week (estimated costs of dinners, $17). A nurse is available who will fill one’s pill box for $10, give an insulin injection for $10, or weigh one for $3. One can get minor repairs in the apartment for a fee, one can have the snow brushed of one’s car for a fee, one can get transportation in the institution-owned van for a fee. One can even have the opportunity of donating escrow moneys to add an Alzheimers Unit to the institution. Entertainment designed for kindergartners is provided. The MOM grinds on.

Now we have the current economic collapse with an estimated loss of 50% in most IRAs. The MOM shows compassion. The management raises to monthly fee by 7%, i.e. $210. The management needs the increased income to cover “rising expenses.” There is a certain problem looming; however, many of the residents are not cognizant of the fact and the mainstream media is not apparently aware of the situation. Other oldsters are terrified but do not know where to turn.

I have indicated merely one example, but there are thousands of the elderly in nursing homes, assisted care homes, etc., facing an imminent disaster. One hopes that some agency of the Obama administration will begin addressing the problem. A problem largely created by the greed of uncontrolled capitalism that has been extant since the Reagan administration and certainly of no interest to the economically neo-liberal Bush administration. Happily many of the legitimate church related housing facilities are looking at the problem and will, I am sure, be privy to its solution.

I would hope that someone, somewhere, is listening.