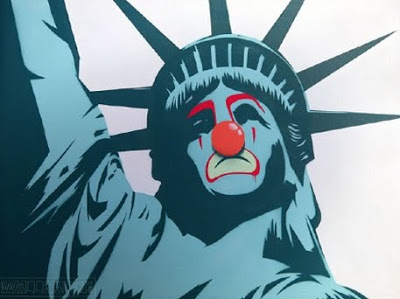 Sold down the river:

America and the big lie

“Tell big lies. Do not qualify or concede a point, no matter how wrong you may be. Do not hesitate or stop for reservations. The masses are always more easily corrupted in the deeper strata of their emotional natures than consciously, and thus fall victims of the big lie rather than the small lie, since they themselves often tell small lies but would be ashamed to resort to large scale falsehoods.” — Adolph Hitler, Mein Kampf.

Since 1987, Physicians for a National Health Program has been working to bring about reasonable health care reform in the United States. The following comes from the August 10, 2011 online edition of the PNHP Newsletter:

These are challenging times for advocates of single payer health reform, we think you’ll agree. Even as PNHP members vigorously celebrate the 48th anniversary of Medicare in opinion pieces, letters to the editor, blogs and even on radio stations across the nation, noting the program’s merits and utility as a model for a universal, cost-effective single-payer system, Congress and the White House set up a “deficit reduction” process that will likely result in serious cuts in the program — with deeper cuts down the road.

The Budget Control Act, signed by President Obama last week, calls for an automatic 2% reduction in Medicare in the event that a newly created “super committee” of six Democrats and six Republicans can’t agree on a wider package amounting to at least $1.5 trillion in cuts in federal spending. This super committee can also recommend cuts to Medicaid and Social Security, among other programs.

The Republicans on this panel are unbending hardliners and one of the Senate’s Democratic appointees, Max Baucus, has voted with the Republicans on many occasions. He supported the Bush tax cuts for the wealthy and was the driving force, with an advisor from the insurance industry, in creating the faux Obama health care bill.

Wendell Potter offers an in-depth look at the Affordable Care Act as part of The Nation‘s series on the American Legislative Exchange Council (“ALEC Exposed”). As we may recall, a very reasonable version of universal health care emerged from the House of Representatives but never was discussed by the Senate. The White House had carried out secret negotiations with the Health Insurance cartel and PhARMA. The prime framing of the final plan came from the Senate Finance Committee under Sen. Baucus.

Mr. Potter points out that there were advance agreements with the insurance industry regarding this legislation, as follows:

There was nothing in the legislation dealing with cost control and no restrictions were placed on “deductibles” or co-insurance.

I would also direct you to the following that appeared on Talking Points Memo:

Last week, Congressional Democrats were blindsided by newly confirmed Defense Secretary Leon Panetta, who basically nixed any further cuts to military spending, and demanded that lawmakers trim from programs like Medicare and raise taxes to reduce future deficits. Republicans on the new Super Committee are expected to seize on Panetta’s remarks to push for another deficit deal that comes exclusively from entitlement cuts.

As a 90-year-old retired physician, I am extremely depressed by the unfolding developments in this country and the apparent lack of concern by the American public as they are sold down the river by the politicians — as the political establishment pays homage to the relatively few Tea Party members of Congress who now control the agenda.

I have just read Erik Larson’s excellent book, In The Garden of Beasts. Mr. Larson points to a cultural change that happened in Germany in 1933. He writes:

Beneath the surface… Germany had undergone a rapid and sweeping revolution that reached deep into the fabric of daily life. It had occurred quietly and largely out of easy view. At the core was a government campaign called Gleichschaltung — meaning “Coordination” — to bring citizens, government ministries, universities and cultural and social institutions in line with Nazi beliefs and attitudes.

“Coordination” occurred with astonishing speed, even in sectors of life not targeted by specific laws, as Germans willingly placed themselves under the sway of Nazi rule, a phenomenon that became known as Selbstgleichschaltung, or “self-coordination.” Change came to Germany so quickly and across such a wide front that German citizens who left the country for business or travel returned to find everything about them altered, as if they were characters in a horror movie who came back to find people who once were their friends, clients, patients, and customers have become different in ways hard to discern.

Now, with the help of the mainstream media, the American people appear to be accepting the current situation without a single cry of anguish or pain. We remain silent — unlike our British cousins, who are taking to the streets in response to a similar assault on the middle and lower classes under David Cameron’s right wing government.

Do not believe that the cause of the furor in the U.K. is simple vandalism; the unrest is the result of the government’s slashing of programs for the middle class, the minorities, the elderly, and the chronically deprived, accentuated by a serious lack of opportunity for the country’s youth, and the decline in health care. All that has ignited the flame. Our collective psyche in the United States will never permit this to happen and should it ever do so there is always NORTHCOM (the United States Northern Command) waiting in the wings.

I am also alarmed by the attitude of my fellow educated progressives, who — despite the quite obvious successes of the Tea Baggers in Congress, especially on the recent budget resolution bill — tend to demean these folks as a gaggle of ignorant troublemakers who will have no long term impact on the nation.

I would call attention to a group that formed in Germany in the 1920s who were ridiculed by the establishment. This group included a wholesale merchant, a second rate Russian architect, a pornographer, a drunken dramatist, a locksmith, a broken down professional soldier, a second rate journalist, a transport pilot, a chicken farmer, and a paperhanger.*

In 1933 these folks asserted themselves quite loudly by confining their critics, largely intellectuals and Social Democrats, to an institution south of Munich. The camp, supervised by the previously mentioned chicken farmer, was known as Dachau. It was not yet a concentration camp for Jews. And, oh yes, the paperhanger would gain even further prominence!

And these folks — as do our politicians today — had their corporate sponsors: Emil Kirdorf, the coal baron; Fritz Thyssen, head of the steel trust; Georg von Schnitzel of I.G. Farben; Carl Beckstein the piano manufacturer; Alfred Krupp of the munitions industry, and many, many bankers.