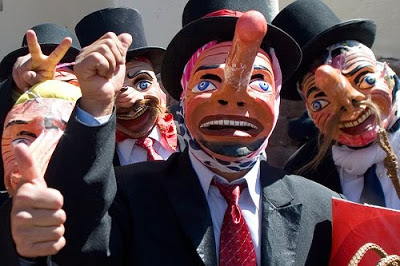 The Republicans are back. Image from xrodgers / Flickr.
Renew attack on poor, elderly, infirm:
Republicans back from Easter break

I pen this over the Easter Weekend, the most holy day on the Christian calendar, when devout believers retreat to consider the basic tenants of the faith, the Sermon on the Mount, and the Beatitudes.

It seems that many of the Republican legislators have lost the spirit of the occasion and more likely have attended a black mass in preparation for their return to Washington to resume their attack on the poor, the elderly, and those with little hope. And perhaps — as part of their regressive anti-science ideology — they will nullify the pardons of Galileo and Copernicus and perhaps initiate an assault on Pasteur’s “germ theory.”

As Mark Twain, no great fan of Congress, noted, “Congressman is the trivialist distinction for a full grown man.”

On April 13, the House of Representatives voted to repeal the Prevention and Public Health Fund by a vote of 236 for and 183 against. This negated legislation that over eight years would provide funds to states and communities for preventive health care programs.

The same day, voting 189 for and 234 against, the House voted to defeat a Democratic amendment to keep the health fund in operation for the benefit of senior citizens. And, on the same day the House voted 235-193 against approving a budget that would privatize Medicare and raise the Medicare eligibility age from 65 to 67 and convert Medicaid to a block grant program run by the states and permanently extend Bush era tax cuts.

That same day the House voted 241-185 to remove funding from Planned Parenthood from the fiscal 2011 budget.

This is the Republicans’ first step in Rep. Paul Ryan’s plan to finally eliminate Medicare, Medicaid, and Social Security, projects started during the presidency of the “sainted” Ronald Reagan.

The demise of Social Security has temporarily been put on hold while they dismember and destroy the health entitlement programs. There are various estimates available about the potential cost to our senior citizens. The proposal to privatize Medicare would, once in effect, provide the Medicare patient with a proposed $15,000 in vouchers annually but would not address what the individual should do once the voucher runs out.

Remember that coronary bypass surgery can result in a bill of somewhere around $100,000 — and there are available estimates (TPMDC) that it could cost $20,000 yearly to purchase private insurance! In addition, many of us forget that Medicaid not only pays for a degree of health care for those who cannot afford private insurance, but it pays for nursing home care for the elderly when their personal savings are depleted.

The alleged objective of all of this is to “balance the budget” — while nothing is done about restoring a reasonable tax rate to the very wealthy nor significantly reducing the cost of fighting questionable foreign wars and maintaining several hundred foreign military bases, many with 18-hole golf courses.

As a matter of fact, the Republican budget would further decrease taxes for the most wealthy 1% of the population while withdrawing a great amount of help to the poor, the disabled, and the elderly.

The vote on Planned Parenthood continues an out-and-out lie that that organization is primarily an abortion provider. Nothing can be farther from the truth. This is merely a symptom of the Republicans’ bigoted attitude regarding women that dates back to the Middle Ages.

Anyone who has read Silvia Federici’s Caliban and The Witch knows that in all this there is a deep-rooted feeling that the female is subservient to the male — and the attack on Planned Parenthood attests to this inner loathing for women.

Planned Parenthood was founded to provide birth control information to women, thus helping to prevent unwanted pregnancies that at the time of the organization’s founding could have led to “back-alley” abortions. Its purpose was to prevent the birth of children that families could not afford to take care of, children who would end up living in poverty, being abused by the unwanting parents, or ending up as wards of the state.

The nation stands on the edge of a return to medieval times, a time of the two-class society of the baron in his castle and the serfs in their hovels — and the Republicans aspire to bring this about under the guise of national financial security. Perhaps the Republicans wish to be the Lord’s tax collector, each year presenting themselves at the peon’s farm, with swords drawn, to collect the baron’s taxes.

This said, even we progressives are aware of the excessive cost of health care in the United States compared to that in other developed nations. We are, first off, the only nation where health care is dominated by unregulated health insurance companies, a fact that adds 30-40% to the nation’s overall health care costs.

Another problem we face is the new concept of “concierge medicine,” where a physician limits his practice to several hundred patients a year, with a yearly membership fee of $1500. The concept is ideal, and takes us back to our own practices in the 1950s-60s, but we did not receive, let us say, $300,000 up-front! In those days there was no insurance and patients frequently left saying, “Doc, I will send you $10 a week.”

We also have the hospital-endowed medical practices, which I alluded to in a prior article, that charge for the physician’s visit and add an additional cost “for the hospital.” This, of course, does nothing to reduce health care costs.

I urge everyone to read this article on medical malpractice liability in Canada. It offers an excellent review of the often misunderstood Canadian health care system, and also shows how malpractice costs can be reduced for physicians.

Another reason that our costs are so high is the lack of primary care physicians. Let us look as how it was once was… I was a rheumatologist before I retired after 40 years of practice in 1999. When presented with a new patient with arthritis, of any of 20-30 varieties — after an hour’s interview and examination — I could have a correct diagnosis 90% of the time and was able to forgo a lot of expensive testing.

Our job then was to explain the condition to the patient, review treatment and its side effects, and obtain a minimum of lab work to appraise any side effects that might accompany the specific treatment to be used. From there on it was the patient and me — united in facing the rheumatoid arthritis, lupus, psoriatic arthritis, or scleroderma – whichever might apply.

Today, the physician’s schedule is overloaded (and many now close their offices at noon Fridays, and over the weekend the answering service refers patients to the ER for intercurrent care). A frequent visit for a new patient begins with the receptionist demanding insurance cards and ID, and the completion of a three-page history form. This is followed by a 10-minute visit with a physician’s assistant, a further 5-10 minutes with the doctor, and then referral for a plethora of lab studies, and very possibly one of a variety of scans that cost from $500-$1,000.

Instead of time, which if used correctly is reasonably inexpensive, we start with hundreds of dollars of testing that might well have been avoided. Then we are placed on absurdly expensive medications that cost two to three times more here in the USA than in Europe or Canada.

Of course, we must pay for the joy of seeing all of those pharmaceutical ads on TV. The United States and New Zealand are the only nations that provide their citizens with the joy of seeing all of this illuminating garbage. Further, we as patients, must indirectly pay for all of the often vulgar physicians’ ads in the yellow sections, on roadside sign boards, or in the local newspaper.

And we must carry the heavy costs of emergency room visits for ourselves, and for the multitude of those poor folks with no regular medical care who must resort to the very expensive ER care in time of need. The medical care system must pay the costs of palaces built by the for-profit nursing home industry to charge some $6,000 or more per month for our elders’ care when no other option exists.

Further, if one is sincere in adhering to the Hippocratic Oath, a physician is here to serve — but not to belong to the extremely wealthy sector of the community. This I referred to in my last contribution to The Rag Blog. Should we ever adopt a system of universal, single payer health care we could arrive at a fair and equitable system of physician payment. Please check out the suggestions of National Nurses United.

I have been asked how, with the fear of malpractice hanging over their heads, physicians can omit doing “necessary” studies. I recall advice from an older family practitioner when I started practice in 1950 (when malpractice insurance cost $75 a year!). He advised me: “Keister, always take time with the patients, and before they leave your office, be sure all their questions and anxieties are put to rest. If you are aware that you have made an error in treatment or management, fess up and discuss the matter with your patient.”

I listened, and practiced for 40 years without incident, and was amazed on occasion how forgiving folks could be. Malpractice costs, as many physicians argue, are partly caused by greedy lawyers. However, much of the cost is related to scams pulled off by the malpractice insurance companies, and by physicians who do not devote enough thought or time to patient care.

Instead of “cutting” reasonable costs, our leaders in Washington should start a government program of subsidizing the education of primary care physicians as is done in all other advanced nations. Perhaps, with an adequate supply of physicians, a reasonable reimbursement system, and a health care system akin to that in many European countries, and other nations like Japan and Korea, we can resolve this cost problem once and for all.

One final thought: Since the advent of medicine dictated by the insurance cartel in the 1990s, I have found it offensive that in their literature the physician is characterized as a “provider.” At the same time the patient is deemed a “consumer.” Dr. Paul Krugman addresses this issue in an article in The New York Times titled, “Patients Are Not Consumers.”

It is perfectly clear that the insurance industry considers the Hippocratic Oath passe and believes that the profits of the free-market should reign supreme.

6 Responses to Dr. Stephen R. Keister : Back from Break, Republicans Resume Assault on Poor and Infirm