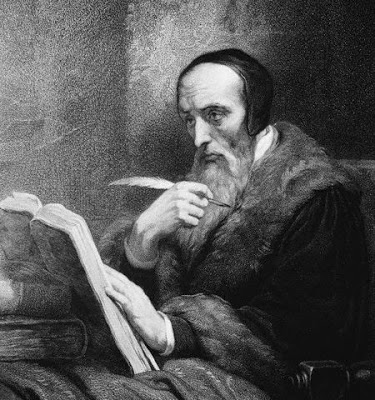 John Calvin: Some are blessed by God.
Reflecting on the health care law:
Flawed bill fixes some problems

There has been time for reflection about the health care legislation — the Patient Protection and Affordable Care Act (PPACA) — since its passage this year. My thoughts were called into focus this past week after I attended a seminar led by Chuck Pennacchio who heads the movement for single payer health care in Pennsylvania.

There is a reasonable possibility that such a plan will be passed before the current governor departs office. The program is all-inclusive and will reduce health care costs for ALL members of the Commonwealth, including municipalities and employers, by some 30-40 percent.

At the seminar, I had a discussion with a retired professor of political science. We talked about why decent, low priced health care seems unobtainable in the United States, considering that such systems are alive and well in virtually every other civilized nation in the world. In two nations that actually have “socialized medicine — the United Kingdom and Canada – the percentage of patient satisfaction, according to polling, runs in the 90’s.

In all the European nations, plus Japan, Korea, and Taiwan, insurance coverage is provided at a reasonable price. My colleague pointed out two salient differences between our society and those of the European countries: the European insurance companies see themselves as providing a public service rather than being vehicles for profit for their executives and stock-holders; and the European consumer looks at the welfare of the community rather than just looking out for himself, and thus is willing to share the costs and benefits.

I discussed this further with a sociologist, an ex-Jesuit, who pointed out another factor to me: the wide spread Calvinistic influence in the United States and the pervading idea of predestination — the assumption that there are those who are born blessed by God, and those who are destined to be poor and inferior.

Thus, there is little reason for those who have the ability to pay their way to help out those who cannot. Why argue with divine will. Why deprive yourself of a Florida golf vacation to succor some poor inner city family with three children and no jobs due to the fact that their employer moved his production to China. (They probably are not of white Anglo-Saxon heritage in any event.)

Of course this thinking helps explain the “tea-bagger” opposition to health care for all and reinforces the conclusions of Sherman DeBrosse in his article about the psyche of the political right that recently appeared in The Rag Blog. It also further explains why PPACA has been a flawed bill from the beginning, as it is merely a national version of the poorly conceived Massachusetts health care plan put in place by then governor Mitt Romney.

It appears that President Obama and Congress passed all that was possible under the circumstances. Those circumstances being that the big corporations overtly and covertly lead the discussion, excluding the medical profession and the public from any meaningful input.

And, of course, the discussion of health care becomes confused by the interjection of the abortion issue, led by the Council of Bishops, spurred on by the insurance and pharmaceutical industries. I may note that I am a member of Physicians for A National Health Program and have never seen the question of abortion mentioned in thousands of pages of literature about how we can best take care of the sick, the disabled, and the infirm.

The health care legislation that was passed may have the following positive results:

Yet many problems will continue to exist:

I joined the Rag Blog family at age 87 and now face my 89th birthday. I have never been so discouraged about this nation, which my ancestors helped build starting prior to The French and Indian War. The United States has become a corporatocracy with a populace interested primarily in their own well being and in the acquisition of wealth.

I watch the street demonstrations peopled by folks who take pride in their own ignorance, holding the educated person up to derision. This in turn influences our failing educational system. I see an increasing injection of “faith” into politics. I think of Glenn Beck speaking in front of the Lincoln Memorial, and I’m reminded of another speech:

My feelings as a Christian points me to my Lord and Savior as a fighter. It points me to the man who once in loneliness, surrounded by a few followers, recognized these Jews for what they were and summoned men to fight against them and who, Gods truth was greatest not as a sufferer but as a fighter.

In boundless love as a Christian and as a man I read through the passage that tells us how the Lord at last rose in His might and seized the scourge to drive out of the Temple the brood of vipers and adders… Today, after two thousand years, with deepest emotion I recognize more profoundly than ever before the fact that it was for this that He had to shed his blood upon the Cross.” — Adolph Hitler, speech on April 12, 1922.

Of course unlike Hitler, Glenn Beck, standing at the Lincoln Monument, was speaking about our Moslem brethren and not about the Jews.