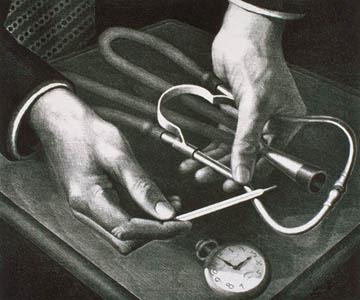 “The Family Doctor,” lithograph by Grant Wood, 1941.
Christmas past:
The compassionate doctor
and today’s medical culture

The Christmas season means many things to many people; however, as I approach age 90 I tend to reflect on what was and what might have been. Christmas to me represents a time of giving — not of material things, but of kindness and compassion.

Many of the modern day fundamentalist “Christians” might feel disdain for those of us who are secularists — and believers in a code of secular ethical culture. But to me the largest concepts of Christian morality lie within Matthew 5:1-12 (The Beatitudes), Luke 10:25-37 (The Parable of The Good Samaritan), and Matthew 19:23-26, (Jesus’ tale of the possibility of a rich man entering the Kingdom of Heaven).

I would like to reflect on two outstanding physicians that I have known who I believe embody that spirit.

Dr. William Watt Graham Maclachlan was my mentor during my period of residency in internal medicine at Mercy Hospital in Pittsburgh, 1945-1950. Dr. Maclachlan was some 60 years of age, a graduate of McGill when the tradition of Sir William Osler still persisted there, a member of the Association of American Physicians with its membership of 50 outstanding doctors nationally, and personal physician to two diverse personalities, Andrew Mellon and Philip Murray of the National Steelworkers.

Dr. Maclachlan’s great love was teaching and caring for the folks in the charity wards, especially those in the pneumonia ward where he supervised much of the early work with penicillin in treating lobar pneumonia, a disease that then carried a 50% fatality rate. The pneumonia ward was populated largely by residents of two local refuge houses, most of them alcoholics, who were admitted in dire straights and in many cases with little hope of recovery.

Dr.Maclachlan would pause at each bedside, check the individual’s name on his chart, pull up a chair, grasp the man’s hand, address him by his last name, and reassure him of his progress and care. It was from him that I learned to appreciate the true objective of the physician, love and consideration for the individual as a human being. In due time Dr. Maclachlan inspired me to become a rheumatologist, before such a specialty formally existed. and thus gave me a purpose for my life during the years 1950-1990.

At this season I think often of the privilege I had in knowing such a wonderful, far-sighted, compassionate human being.

Another person who I will always remember is Dr. Hyman Casselman, lovingly known as “Casey.” I met Dr. Casselman in 1950 or thereabouts, when I opened practice in Erie, Pennsylvania. Casey was a Canadian, also trained at McGill, who had interned in Erie, married a local lady of considerable means, and settled here to work as a family physician. During World War II he was assigned to an army dispensary in Arlington, Virginia. where his patients proudly included Generals Marshall and Eisenhower — before they had achieved full military rank.

Casey was the physician for the underprivileged, the poor and neglected, in the Erie area. He made house calls day and night in all kinds of weather and he never pushed a family for payment. His primary concern was for the well-being of the individuals and their families, not for his financial gain.

He never had a big house in the affluent section of the city. I remember encountering an elderly Afro-American who looked me in the eye and proudly said, “Dr. Casselman is my family doctor.” Casey was one of the few physicians who joined me in opposing the Vietnam War. I was proud to have such a partner in my personal and very lonely rebellion. I was also proud, in Casey’s later days, to be asked to present him with the Maimonides Award. Casey died at the age of 92 in 1998.

These two gentleman would be entirely befuddled by today’s medical culture where, upon entering a physicians office, you are immediately asked for your insurance card and asked to sign a bunch of papers having to do with financial and legal liability. You are then paged by your given name as if the receptionist/nurse were an old acquaintance, and escorted into an examining room where you are interviewed by a physician’s assistant.

No more of this sitting down and talking to the doctor for 45-60 minutes on the first visit and developing a personal friendship. Finally, if fortunate, one is able to spend 15-20 minutes with the physician, who may well be taking notes on a laptop during the interview. Sometimes you are even granted the opportunity to ask questions before being hurried out the door to set up your next appointment.

I have personally been fortunate, and I do not believe that it is because I am a physician, to have had the privilege of communicative, caring doctors (very much an exception these days) as my personal internist, my pain management physician, and an oncologist at our outstanding Regional Cancer Center.

Since the health insurance industry takeover of medical care in the United States — as we have noted in prior dispatches on The Rag Blog –- medicine has been transformed from a profession into a business not unlike those designed to sell insurance or used cars.

In the present culture of greed and materialism in the United States I see very little hope for our reverting to what we once were, or transforming our health care system into what exists in many other nations of the world. There appears to be little political interest, for instance, in establishing a single payer, universal health care system, as is promoted by Physicians for a National Health Program or the American Nurses Association.

In case you missed it, I would call everyone’s attention to an extensive and impressive document published on Mother Jones online. It’s the International Federation of Health Plans’ “2010 Comparative Price Report, Medical and Hospital Fees by Country.” We should become familiar with the information in this report if we indeed some day hope to join the rest of the world — with first rate care at reasonable costs.

There are only two nations in the industrialized world with “socialized medicine” — Canada and the UK — and 93% of Canadians are reported to be happy with their program. The UK program is a bit in flux under the current Tory Government and I have seen no recent statistics on satisfaction. The remaining nations have programs based on private health insurance with government oversight of costs and services.

I look to the future with more fear than I have experienced since the days of Sen. Joe McCarthy. The Obama administration, in spite of the howls from the political right, has little in common with the progressive America of the LaFolletts, Norman Thomas, and Franklin D.Roosevelt.

There is little hope of obtaining again our once national greatness under a Congress and Senate dominated by the corporations and their mainstream media shills. It seems to me a paradox that Obama is so hated by the mass of the conservative movement when in essence he is in bed with the majority of their policies.

One must surmise then that the dislike is based on his being seen as “the other” by a poorly informed, television-hypnotized public — a public which lives largely in a world noted for what Hannah Arendt called “the totalitarian contempt for facts and reality.” It was Joseph Goebbels who said, “It is the absolute right of the State to supervise the formation of public opinion.”

Finally, as a “senior citizen” I am aghast at the commercial efforts to take advantage of the elderly population with contrived misinformation like the massive advertising campaign to sell Medicare Advantage Plans in place of normal medicare to the senior population. This advertising costs millions of dollars, all to be passed on to the poor devil who buys the junk.

And the unending barrage of pharmaceutical ads on TV! The pharmaceutical industry, which spends more on advertising than on research, is passing on the costs to the buyer with this flow of undocumented foolishness. “Be sure and tell your doctor if you have diabetes or high blood pressure.” Goodness, if your doctor is not aware that you have high blood pressure or diabetes it is time you change doctors.

Happy Holidays to all.