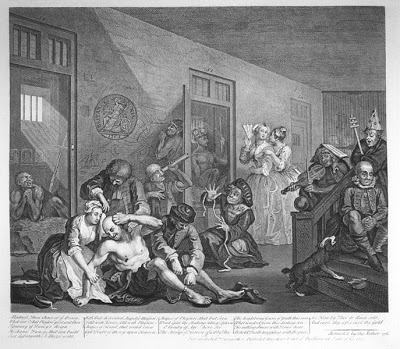 Birth of the Republican Congress: “The Interior of Bedlam” (Bethlem Royal Hospital), from A Rake’s Progress by William Hogarth, 1763. Image from McCormick Library, Northwestern University / Wikimedia Commons.
The Congress from Bedlam:
Health care and American priorities

“I know of no country in which there is so little independence of mind and real freedom of discussion as in America.” — Alexis de Tocqueville.

One might conclude that the current Republican Congress was spawned in Bedlam.

The nation faces what could become the worst financial crisis since the creation of the republic, and a health care crisis second to none. Yet the legislative goals of the Republican Congress, encouraged by the fundamentalist Christian Right and the Tea Party movement, appear to be (1) abolishing Obama’s health care program, (2) curtailing abortion rights, (3) defunding Planned Parenthood, (4) defunding NPR, and (5) declaring English as America’s official language.

I find the attack on the health care law beyond comprehension since it was negotiated in secret between the Obama administration and two of the industries that are financial keystones of the Republican Party — the health insurance cartel and the pharmaceutical industry.

Not only does the legislation guarantee greatly increased profits to these corporate entities, but the entire plan is modeled on the Mitt Romney program under which the Commonwealth of Massachusetts still suffers from higher health costs and no decrease in the number of personal bankruptcies for those unable to pay their medical bills.

Recent information indicates that the insurance companies nationwide have been able to increase their rates by 20-60 percent since passage of the legislation. Little improvement has been made in providing coverage for those with pre-existing conditions because of excessive premium costs, while 50 million Americans are still uninsured and thousands still die from lack of health care.

What is it that creates such fury in Republicans that they wish to do away with the legislation? One might think we had enacted a low cost, inclusive, all-encompassing health care plan like those in most of the nations of the free world.

The near total failure of this legislation is discussed in detail by Kevin Zeese in a Truthout article entitled “One-Year Anniversary: The Incredible Shrinking Obama Health Care Law.”

Our Republican friends should also gain great satisfaction in the fact that the personal physician, the traditional family doctor, will soon be replaced by hospital-based doctors, thus increasing the cost to the average citizen and concurrently increasing profits to the hospital industry.

In my home, Erie, Pennsylvania, we have been watching the evolution of this phenomenon for some years. Here, most medical practices are now under the aegis of two traditional hospitals. As the older practitioners die or retire, options will be increasingly restricted.

This is pushing us further into a corporate structure that idealizes profits rather than professional medicine. This process is discussed in detail in an article at Smart Money, in entitled “Say Farewell to the Family Doctor.”

The one bright spot on the horizon is the passage of a universal health care bill by the Vermont House — The Vermont Health Care Authority — by a vote of 89-47. The Governor has expressed his approval for the legislation, which still must pass the Senate. The law has been contested by all of the corporate interests that one would anticipate.

Much work is yet to be done, but there is cause for encouragement. The physicians are pleased as punch, and many other doctors may look to Vermont as a good site to move their practices.

Unhappily one can anticipate little movement from the American public in the direction of intelligent economic or health care policies. The average American, sadly, has little knowledge of the state of national affairs and the workings of government — or what is really in his or her own interest.

Newsweek recently published a survey where 1,000 Americans were given the U.S. Citizenship test, a test taken by new immigrants at the time of naturalization, and 38 percent of current citizens failed it. European tourists with whom I talk know more about current affairs in the United States than do many of my neighbors.

One other bit of encouragement is Rep. Anthony Weiner’s move to attach a “public option” to the current federal law. I feel that Rep.Weiner is one of a handful of honest elected representatives in Washington, and I admire his diligence and honor; however, I greatly fear that he is talking to the sea. The organization, Physicians for a National Health Program, continues its efforts and I would encourage those who can donate to do so. Hopefully, one day, it will be more than a voice in the wilderness.

Another positive note is the slowly increasing public attitude favoring the legalization of cannabis. A number of states have approved use of the plant for medical purposes, and many far-sighted individuals are beginning to see a bright side to decriminalization – like increased tax revenue in the billions of dollars, and the elimination of the tremendous expense of incarcerating those convicted for possession. Three more states, New Hampshire, Rhode Island, and Vermont, are close to arriving at rational decisions.

I tend to support the legalization course, as well as national laws permitting prescription cannabis, though I have never experienced the drug personally. Patients, and relatives of patients, have told me repeatedly that smoking a joint gives much more relief from pain caused by chronic or terminal illness, than prescription opiates.

My underlying fear is that the pharmaceutical industry will get on board the prescription cannabis train and at the same time lobby against legal, government-regulated, individual use of pot, leading to “prescriptions for profit” while individual use continues to be a felony.

I fear, as well, that the lobbies for the liquor industry will do their best to prevent sale of a drug much less physically and psychologically harmful than most alcoholic beverages. I would urge that all who have a rational Congressperson contact him/her and encourage the movement for national legalization.

3 Responses to Dr. Stephen R. Keister : Health Care and the Congress from Bedlam