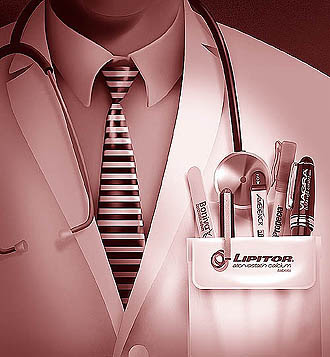 Recently I awoke to a front page article in The Erie Times-News headlined “Doctors’ hawking products raises concerns. Critics say plugging goods is unethical.” It was an excellent survey on the local level of the the deteriorating ethics of the medical profession, naming doctors’ names, and quoting the payoffs to physicians by the pharmaceutical companies involved for “providing educational services.”

My hat is off to the Times-News for showing courage to raise this specter locally, as Pro Publica has done recently on a larger scale in its “Dollars for Docs” series, and especially an article entitled, “Payments to Doctors by Most Pharma Companies Still Remain Secret.”

In this series, Pro Publica tells the story of the total deterioration of medical ethics in the United States. How did we get to this point? Where did these practices originate? Let us step back a few years and look at the ethical/historical implications of this aberration, noting the blame that must be borne by the doctors, but also taking into account the larger societal picture.

I graduated from medical school in 1945. At that time we had a peculiar idea that the role of a physician — as a professional instructed in the healing arts and sciences — was to provide care for his/her patients. The Hippocratic Oath was somehow still in vogue, and, oddly enough, most graduates of that time took it seriously. Making a decent but not lavish living was a side issue.

After internship and residency I opened a then unique practice in rheumatology in Erie, Pennsylvania. At that time the hospital I was affiliated with required all physicians — before we were permitted to admit patients — to serve two months, averaging 2-3 hours a day, caring for the hospital’s 20-30 charity inpatients, with the aid of an intern. We were also expected to put in one morning a week working in one of the various charity specialty clinics in the hospital. As time went on, and “hospitalization insurance” evolved, these demands lessened, and by the 1970s were nonexistent.

In our private office practice it was customary to spend a full hour with a new patient, provide 15-20 minutes for follow-up visits, and depend on the good will of the patient to either pay the charges on departure or make arrangements with the receptionist to pay as he/she could at a later date.

If an urgent situation arose while we were off-duty, the telephone answering service would gave the caller our home phone numbers and the problem would be resolved by telephone, a house call, or meeting the individual at the emergency room.

Sometime in the 1970s-1980s changes started happening. I had a dermatologist friend who organized “future physicians” programs at several local high schools. He enjoyed the interest of the students, the give-and-take, the feeling of accomplishment — but around 1970 he became disillusioned and dissolved the program. Why? The students were becoming more interested in making money than in dedicating themselves to the profession. Just a small example of our evolution into a society primarily concerned about accumulating individual wealth and not about the well-being of our fellow man or the broader interest of the community.

Thus we have witnessed the ongoing evolution of social Darwinism in our society, of the current American attitude that wealth is God’s way of rewarding the individual. The coup de grace was the well-calculated takeover of the medical establishment by the health insurance cartel. Since that time the physician has devolved from a professional to a businessman, essentially owned by the insurance industry and assuming the ethics and morality of that industry.

In my final years of practice roving physicians, prostituted to the pharmaceutical companies, began providing dinner/educational programs at the more posh local hotels, to “educate” the local practitioners on the advantages of different medications. At times the invitees were provided a stipend for attending the gathering.

The ultimate illustration of this financial pandering occurred in my last year of practice, 1989, when I received a special delivery letter requesting my presence at a three-day “educational” meeting at a luxury hotel in Phoenix, Arizona, all expenses paid, to be accompanied by a “companion of my choice.”

I had never availed myself of such an opportunity in my years of practice and felt that perhaps I should have some first-hand knowledge of what the world was all about. Thus, in view of the fact that my wife had settled “the companion of choice issue,” I signed on. We were provided a round-trip airplane ticket, three nights in a luxury hotel with meals and entertainment, in return for my attending lectures for three hours each morning.

There were some 200 physicians in attendance, and a repeat performance was scheduled for the next week. I pointed out to my wife that some of the physicians had brought their daughters rather than their spouses, and her response was “do not be naïve.” I was cursed by a sense of shame for being there but, in retrospect it was indeed an “educational” experience — not for what I learned about the pharmaceutical product being touted, but for what it taught me about the drift in our culture and morals.

Our current system of medical care and delivery ranks anywhere from 24th to 36th in the industrialized world, depending on the agency doing the evaluating. Yet, there is no overwhelming public anger about this fact. Instead, the public was taken in by absurd claims about “government death panels” and the advent of “socialized medicine.”

This gullibility on the part of the public, aided and abetted by the corporate-owned mainstream media, does not bode well for the future. The people in their ignorance confuse legitimate, compassionate hospice care, with “death panels” and reasonably priced medical care provided by a nonprofit insurance company and administered by public representatives and medical doctors, with “socialized medicine.”

Most of our citizens haven’t the slightest idea what is happening with our health care system. Costs here are 2-3 times those in other developed countries. Canada and the United Kingdom have what you might call socialist systems, but polling in both countries shows that the public is happy with the care they receive; in Canada, more than 90% respond positively, and the only major complaint in the UK concerns slow service in some areas.

Most European nations, and Japan and Taiwan, have government-subsidized private insurance plans, with funds going to provide patient services, not absurdly high executive salaries and stockholder dividends — at something like $500 per month for a family of four, with insurance co-payments of 10-20% for outpatient services and pharmaceuticals.

This varies a bit from country to country, but they provide all basic health services, often including house calls. Supplemental insurance may be purchased for private rooms and other special care. And those additional services are much less expensive; where one pays $1,500 for a MRI in the USA, it may cost something like $200 in Europe. And we pay 2-3 times more for pharmaceuticals here.

No other country, save New Zealand, has the endless TV commercials for prescription drugs that we must endure in this country. (Is it still necessary to advertise Viagra?) Nowhere else is there such collusion between researchers and pharmaceutical companies, although the latest AARP Bulletin contends that only a very small percentage of physicians allow these ads to color their judgment in writing prescriptions. In no other country do we find ads for physicians in the yellow pages, in newspapers, or on roadside sign boards. Nowhere else do hospitals advertise on TV or in local newspapers.

I can look at the current world as both a physician and a patient, having had some recent reactivation of my prostatic cancer, which was irradiated 10 years ago. And I cannot complain, since — between Medicare and my supplementary insurance — my care has been excellent, allowing me free choice of doctors and hospitals.

Happily I learned early to avoid Medicare Advantage plans which limit choice and in the long run were designed to create income for the insurance company managing the plan. I am happy that the community where I live provides excellent hospice services so, when I face the inevitable end, I can look forward to humane, compassionate care and not prolonged misery in a hospital setting. (Switzerland provides an even better option, but it involves a lot of administrative problems.)

I see no hope for first class medical care for all in the United States in the foreseeable future. The insurance cartel and the pharmaceutical companies dominate our media, while the public accepts or has no understanding of the problem (in France the streets would be filled with demonstrators). The Republicans would do away with Medicare and would privatize Social Security. And the Democrats, starting with the president, seem lacking in idealism and ecourage little community activism.

The health care legislation passed this year is essentially a farce — created in coordination with the insurance cartel and PhARMA — and provides only minimal additional benefits to the consumer while lacking in cost controls. Most of the good work being done in the medical profession comes from Physicians for A National Health Program, the American College of Physicians, and the Academies of Pediatrics and General Practice. One cannot count on significant support for change from the overpaid surgical specialities and those physicians already acting on behalf of the megacorporations.