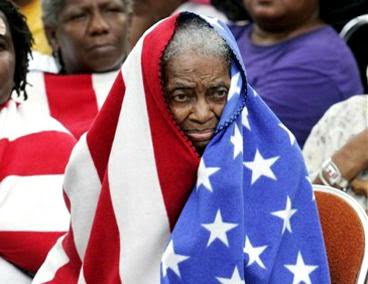 The picture of poverty in America. Image from Bay View.
Poverty and public health:
The social causes of death in America

“[The] incredible absolute size and commanding market positions [of a few immense corporations] make them the most exceptional manmade creatures of the twentieth century… In terms of the size of their constituency, volume of receipts and expenditures, effective power, and prestige, they are more akin to nation-states than business enterprises of the classic variety.” — Richard Barber, from the book Friendly Fascism by Bertrand Gross.

These days we are always on the lookout for a bit of encouraging news. But the final analysis of the Vermont health care plan comes as a bitter disappointment. The online organization Single Payer Action on June 21 provided us with the sad news: the much-touted Vermont plan is not single payer, not even close.

It seems that the phrase “single payer” was stripped out during the final negotiations, and the implementation of the legislation is dependent on federal approval. It also appears that agencies in Washington will not grant needed waivers. The bill permits the private insurers to operate in Vermont indefinitely.

ScienceDaily reports on a study done at the Columbia University School of Public Health that brings home once again the great failings of the healthcare system in the United States. The study “found that poverty, low levels of education, poor social support and other social factors contribute about as many deaths in the U.S. as such familiar causes as heart attacks, strokes, and lung cancer.”

Overall, 4.5% of U.S. deaths were found to be attributable to poverty — midway between previous estimates of 6% and 2.3%. However, the risks associated with both poverty and low education were higher for individuals ages 25-64 than for those of 65 or older. The authors’ findings for a broader public health conceptualization of the causes of mortality and an expansive policy approach that considers how social factors can be addressed to improve the health of populations.

Meanwhile, our elected representatives continue their budget negotiations in Washington with an eye on further cutting an already inadequate Medicaid program and “revising” Medicare benefits, continuing the downward spiral of health care for the poor, the disabled, our returning servicemen/women, and the emotionally ill.

Happily, there is some galvanizing opposition, as witnessed by a massive protest by National Nurses United in Lafayette Square demanding a tax revenue increase from corporations in order to prevent such cuts in Medicaid and Medicare.

I am encouraged by the rare occasions that a group of dedicated Americans will gather in public to speak up against injustice. But I also wonder about the lack of public militancy against injustice here that we see demonstrated by the citizens in our fellow democracies in Europe, especially in Greece, Spain, France, and the United Kingdom.

It would seem that there is an answer, a disturbing answer, contained in an article by Harriet Fraad, published in Tikkun and distributed by AlterNet. The title: “Why Are Americans Passive as Millions Lose Their Homes, Jobs, Families, and the American Dream?” While Dr. Fraad offers some suggestions, one hopes that they do not come too late.

Noam Chomsky peripherally addressed this matter in a 1995 essay when he wrote:

A final point, something I’ve written about elsewhere (e.g., in a discussion in Z papers and in the last chapter of Year 501). There has been a striking change in the behavior of the intellectual class in recent years. The left intellectuals who… years ago would have been teaching in working-class schools, writing books like Mathematics for the Million, participating in and speaking for popular organizations, etc., are now largely disengaged from such activities, and although quick to tell us that they are far more radical than thou, they are not to be found, it seems, when there is an obvious and growing need and even explicit request for the work they could do out there in the world of people with live problems and concerns. That’s not a small problem. This country right now is in a very strange and ominous state.

People are frightened, angry, disillusioned, skeptical, confused. That’s an organizer’s dream… It’s also fertile ground for demagogues and fanatics who can (and, in fact, already do) rally substantial popular support with messages that are not unfamiliar from their predecessors in somewhat similar circumstances. We know where it has led in the past; it could again. There’s a huge gap that once was at least partially filled by left intellectuals willing to engage with the general public and their problems. It has ominous implications, in my opinion.

A few bright lights in the darkness: Senator Bernie Sanders is facing down the pharmaceutical industry. He has introduced a bill in the Senate authorizing government expenditures of some $80 billion per year to buy up the patents that were awarded to the drug companies for “carrying out research.”

The money would come from a tax on public and private insurers. The savings from lower-cost drugs would immediately repay more than 100 per cent of the tax.

The country is projected to spend almost $300 billion on prescription drugs this year. Prices would fall to roughly one-tenth the amount in the absence of patent monopolies, leading to a savings of more than $250,000 billion. The savings on lower drug prices should easily exceed the size of the tax, leaving a substantial net reduction in costs to the government and private insurers. For more details about the legislation, see “The Drug Market Scam” by Dean Baker on AlterNet.

The other side of the coin involves a decision by the Supreme Court on June 23, 2011, freeing the generic drug makers from providing consumers with the specific dangers of using a drug. The court, at the same time, gave the pharmaceutical industry access to prescriptions written by physicians for their patients. So much for “patient-physician confidentiality”! 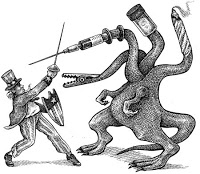 The other bit of good news came in a June 16 New York Times op-ed by President Jimmy Carter, when he joined the chorus of those asking the government to call off the Global War on Drugs. Thus he added his voice to those of Richard Branson, George Shultz, and Paul Volker. President Carter pointed out that this legislation has increased our prison population from 500,000 people in 1980 to 2.3 million in 2009. The increase mostly is for crimes that are non-violent and related to drug possession. There are 743 people in prison for every 100,000 Americans, a higher proportion than in any other country and seven times as great as in Europe. Some 7.2 million people are either in prison, on probation, or on parole — more than 3% of all American adults.

Of course, the fight for enlightened drug policy, as seen in most European nations, will be fought tooth and nail by those who are financially rewarded by the so-called war on drugs — the crime cartels and those receiving baksheesh from the criminal enterprises (corrupt law enforcement officers, politicians, judges, and the operators of our uniquely American private prisons).

One final personal thought: The Republicans keep repeating the mantra that if we increase the taxes on the wealthy, they will not have the funds to create jobs. Of course, this is pure and simple poppycock. Their wealth is not used to produce employment. In the autumn of 2008 at the time of the financial crash, I was talking to a Swiss banker who works for a typical big Swiss bank. In the autumn of 2008, he said, the bank’s below-street-level gold vault, encased in concrete, cracked open under the weight of the gold bullion being shipped in from the U.S.A.