Dr. Stephen R. Keister : Sick of Being Spoon-Fed the News 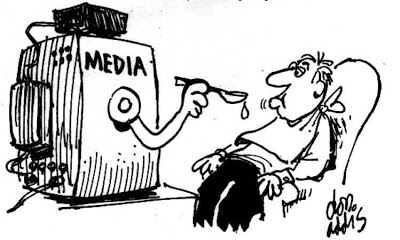 In his novel Sidetracked, Henning Mankkel quotes a retired journalist:

There are two kinds of reporters. The first kind digs in the ground for the truth. He stands down in the hole shoveling out dirt. But up on top there’s another man, shoveling the dirt back in. There’s always a duel going on between these two. The fourth estate’s eternal test of strength for dominance. Some journalists want to expose and reveal things, others run errands for those in power and help conceal what’s really happening.

We here make note of the prior dismissal of Keith Olbermann and the recent firing of Cenk Uygur from our only “liberal” television outlet, MSNBC.

When I consider the lack of valid, intelligent information currently available to the American public it would seem that the dirt is being replaced in the hole much more rapidly than the honest, dedicated journalist can dig it out.

I thank my lucky stars for The Nation, The Progressive, and our own Rag Blog and similar credible online news sources.

I am reminded of the remarks made by John Swinton one night in 1880. Swinton, the former chief of staff of The New York Times, continued to write an occasional column but had abandoned full-time editorial work to become active in the labor movement. At a press banquet someone who understood neither the press nor Swinton offered a toast to the independent press. As quoted in Labor’s Untold Story by Richard O. Morais, Swinton, outraged, replied:

There is no such thing, at this date of the world’s history, in America, as an independent press. You know it and I know it.

The business of the journalist is to destroy the truth, to lie outright, to pervert, to vilify, to fawn at the feet of mammon, and to sell his country and his race for his daily bread. You know it and I know it, and what folly is this toasting an independent press?

We are the tools and the vassals of rich men behind the scenes. We are the jumping jacks, they pull the strings and we dance. Our talents, our possibilities and our lives are all the property of other men. We are intellectual prostitutes.

Some of us have fought a dedicated fight for serious health care reform in the United States, but I note in various polls that this issue has been relegated to approximately fifth place in the public’s interest. Of prime concern, some 80% of the public is interested in the lack of employment and, in my opinion, rightfully so. However, our chief executive and the dolts in Congress (save for a few compassionate thinking souls) are involved in theatrics that accomplish nothing for our citizens or for the welfare of the country at large.

The press, meanwhile, is consumed with the dubious presidential commission on debt reduction, the suggestions of the “Gang of Six” (three conservative Republicans, two blue-dog Democrats and Sen. Durbin), as well as numerous interviews with totally out of touch “Tea Bag” freshman congressmen — and various Wall Street characters who are presented to the public as “economists.”

The mainstream media largely ignores the efforts in several states to fix elections through such means as requiring photo identification cards and widespread redistricting (read: gerrymandering). Little note is made of the growing layoffs of municipal employees, and the fact that many of the 20% unemployed are losing their unemployment insurance and health care benefits.

There has been minimal attention paid to the punitive anti-abortion legislation being passed in many states, returning us, unhappily — and irrevocably, I’m afraid — to the era of “back-alley” abortion which I witnessed in my days as a resident physician — when I watched young women die a horrible death of gas gangrene sepsis.

We hear that “entitlement” programs are the cause of the national deficit, a claim that ignores the entire history of Social Security and Medicare as traditional off-budget items, to be paid for out of a specific “lockbox” fund, paid for by every worker’s employment tax which he/she paid for with a lifetime of labor.

No mention is made of the fact that successive presidents have raided that fund, set aside for entitlement programs, to pay for ongoing, unending wars, and for creating a large surplus of needless military hardware, and who have replaced the “lockbox” funds with government bonds, hence making the social programs part of the general budget.

And we find in the mainstream news media little or no detailed analysis of the cause of our military adventurism and its cost to the average American. We are conned with cries of “terrorism” and made to feel unpatriotic (and thus not to be counted among the “exceptional” American people) if we question the Washington establishment.

I would wager that nine out of 10 Americans are unaware that we have over 700 foreign military bases, many with 18-hole golf courses. Do we know who acquired the oil resources of Iraq after the large scale fighting ceased, and are we aware of the rich mineral and gem resources being exploited in Afghanistan, as has recently been reported in great detail in Fortune Magazine (“J.P. Morgan’s hunt for Afghan gold“)?

Has the mainstream media reported on the implications of the defunding of Medicaid as is being pursued by the Republican House of Representatives? Not only do we diminish the health care of our poor, underemployed, and unemployed, but we will also lose the prime support for nursing home care. If we follow the dictates of these imbeciles in Washington, Cleveland and Detroit will, in the not too distant future, look like Calcutta in the 1920s.

There is hope in other lands (read Ezra Klein’s article in The American Prospect, entitled “The Health of Nations“). Unhappily our elected representatives have other interests and their self-survival to consider. To hell with the American people; they bend their knees to the great corporations.

Life has it’s stresses as I — with my malignancy — approach the age of 90; however, never in my lifetime have I seen our nation run by such a group of inept, uneducated, grasping, cruel legislators — excepting Bernie Sanders, Sherrod Brown, Al Franken, Barbara Boxer, and many of the members of the Progressive Caucus of The House of Representatives. And never have I seen the public-at-large so lacking in notable leaders.

Where are the likes of John L. Lewis, Norman Thomas, Phillip Murray, Henry Wallace, and men and women of courage who will lead the sheep away from the precipice.

I cannot help but visualize the passive German masses of 1932 as I look about our nation today. I see multitudes who will respond in automatic obedience to an authority figure, not as individuals in search of liberty and justice. I fear Hannah Arendt had it correct when she coined the phrase the “banality of evil.”

Finally, on a more cheerful note, happy birthday to Rag Blog editor Thorne Dreyer, who turns 66 on August 1st. You still embody that great generation which spawned SDS, the underground press, the thinkers and concerned citizens of your era.

1 Response to Dr. Stephen R. Keister : Sick of Being Spoon-Fed the News