Dr.Stephen R. Keister : The Doctor and the Body Politic 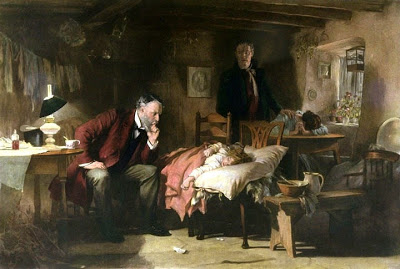 The Doctor by Luke Fildes.

I, as an elderly retired physician, idealize what is shown in the painting by Luke Fildes’ ‘The Doctor,’ and look upon the word ‘physician’ in the Greek derivation, i.e. ‘healer.’ I think of Hippocrates, Maimonides and Sir William Osler. I envision the practice of medicine as I knew it for 40 years, 1950-1990.

This morning I came across a release from “Unions for Single Payer HR676” entitled “Who Does Senator Baucus Listen To?” In brief it notes that Senator Max Baucus, Chairman of the Senate Finance Committee, has said in writing that in his new healthcare legislation “everything is on the table” — “except single payer.” Of course, as I have noted in prior Rag Blog articles, I have all along suspected that Sen. Baucus was in the pocket of the private insurance industry. Go to http://www.opensecrets.org/.

With the millions of dollars being handed to our elected representatives by the insurance/PhArma complex one anticipates that many will oppose HR676 or merely passively sit out the debate. The recent hostility to the American citizen demonstrated by the Republican minority in the House and Senate concerning economic recovery, or confirmation of the Obama designates for Secretary of Labor or Attorney Genera, gives one the feeling that the monied interests will continue to defend the privileges of the wealthy establishment. There is a long way to go, and I am not assured that the proponents of single payer care are on the same page.

I, as an elderly retired physician and a proponent of HR 676, may indeed have a different idea of what to expect. I idealize what is shown in the painting by Luke Fildes’ “The Doctor,” and look upon the word “physician” in the Greek derivation, i.e. “healer.” I think of Hippocrates, Maimonides and Sir William Osler. I envision the practice of medicine as I knew it for 40 years, 1950-1990, when we spent an hour on the first visit with the patient, in discussion and examination, and I as a rheumatologist, was 90% sure of the diagnosis, whether it be lupus, rheumatoid arthritis, or scleroderma after that initial encounter. Thereafter we provided the patient with information on causes, outlook and treatment. Testing was limited to 10% for confirmation or guidance in therapeutic management. After that follow up visits involved an interaction between two interested human beings. Currently, I find that a first visit consists of filling out a 4-6 page questionnaire, an encounter with a physician’s assistant, a brief discussion with the “doctor” and a final answering of questions by a nurse assistant who also sets up the next appointment.

The February, 2009, issue of Harper’s Magazine has an excellent scholarly article by Luke Mitchell, “Why America won’t get the health care system it needs.” HR 676 is briefly mentioned, but not discussed. It is pointed out that in 2006 Americans spent $2.1 trillion on health care at $7,026 per person, far more than any other nation, and that 20,000 Americans die prematurely because of lack of access. Mention is made that 30,000 Medicare recipients die each year of overtreatment. Much of the article has to do with technology.

Another excellent article, by Atul Gewande, appears in the Jan. 26 New Yorker: “Getting There From Here. How Should Obama Reform Health Care.” Well researched, well presented, but no mention of HR 676. It surely seems that we who are proponents of single payer, universal care, are not only mightily opposed but we are not on the same page.

I was interested to note in Roll Call, Jan. 1, 2009, that Representative John Dingle had introduced a program for national health insurance, and for other purposes, HR 15. Reviewing the summary of the proposition it appears disjointed, under researched, almost sad to read. One wonders why Rep. Dingle has not joined Rep. Conyers in sponsoring HR 676, a bill that rests on over 20 years of research into universal health care by Physicians for a National Health Program. In addition, .Politico on Jan. 21, 2009, sets forth a proposition by Sen. Bernie Sanders and Rep. Jim Clyburn, suggesting local health centers as a key to care.

There is encouragement in a Jan. 15, 2009 news release by the Harvard School of Public Health indicating that health care is among the public’s top priorities for economic stimulus. Americans rank helping the newly unemployed afford health insurance coverage second (picked by 33% as top priority) behind helping businesses keep or create jobs (45%). The public is split about evenly between those willing to pay higher taxes for universal care. The Democrats (59%) are willing to pay more but most Republicans are not (67%). This report was released by the Kaiser Family Foundation and is worth perusing in detail.

Of peripheral interest is a report in the New York Times, Jan. 22, 2009, that reports that the Peoples Republic of China, a nation recently transitioned from Communism to Free Market Capitalism, is now going to spend $123 billion by 2011 to establish universal health care for its 1.3 billion people. It seems, that at least abroad, first Europe, then Canada, Japan, Australia — the world at large save for the United States — favors universal health care. Only here does the greed of the insurance and pharmaceutical industries hold sway. An article by William Pfaff in The Commonweal, Oct. 10, 2008, entitled “Original Sin & Free Market Capitalism,” may help us to better understand this problem.

Finally, to understand the role of the physician in the current dilemma, see a book review in the Dec. 8, 2008 New Republic entitled “Really Doctor,” a review of a book by Jonathan B. Imber entitled “Trusting Doctors; The Decline of Moral Authority in American Medicine.” One of the closing paragraphs deserves repeating:

“For more than 2000 years that interaction (ie moral authority), and its setting of medical morality, was the primary basis of the trust and the authority placed in the members of the medical profession and the profession as a whole by those who depend on them for healing. Now thee uniqueness and intimacy of the interaction has been allowed to fray. THAT is the moral crises. It behooves the profession and the laity to recognize its gravity and to seek measures to restore as much of the old relationship between patient and physician as is reparable.”

However, let us hope that some of our elected representatives can rise above the temptations of the bribes offered by the insurance and pharmaceutical lobbyists and surprise the public with some positive moves. What should we ask for in addition to the passing of HR 676?

1. Increase the supply of family physicians through government-subsidized qualified medical school candidates working in a University affiliated doctoral program, provided with a qualified faculty, and teaching in a university hospital. One should beware of unaffiliated “medical colleges” without an extensive academic back up, as these represent little more than medical trade schools. And, as I have previously suggested in a Rag Blog essay, the founding of a “Health Academy” to train physicians in the manner of Annapolis or West Point, and to require graduates, in either instance, to devote at least five years to underserved areas.

2. Reasonable control of the pharmaceutical industry, banning all advertising (notably on TV) except in professional journals. As noted earlier marketing absorbs 40% of the industry budget as opposed to 20% for research. This, with cost control on executive salaries and bonuses, as well as negotiated pricing, should hopefully reduce the costs to the consumer to a level paid in other western nations.

3. Reduction of hospital costs by banning unneeded advertising for non-profit hospitals. For instance, we in Erie, Pa. have a first-rate, university affiliated cancer center. Yet on TV, four and five times an evening, appears an ad for a cancer center in a neighboring city.

4. Careful professional evaluation of end of life care by a combined panel of physicians and medical ethics experts. Medicare’s financial outlay is disproportionately used to subsidize end of life care at the expense of its other functions. Unneeded costly procedures should be evaluated in the context of available humane Hospice Care.

5. The elimination of “Medicare Advantage Plans,” a Bush handoff to the insurance companies that are depleting a rapidly sinking Medicare Fund. To cover deductibles and co-payments, a program of supplementary insurance, individually purchased, from a public, non-profit insurance agency, or as an alternative, as in France, to private carriers, with cost controls written in.

6. Review of the quality of nursing homes, and assisted living facilities, with additional review of the profits and executive salaries should these be corporate entities.

7. The limitation of public advertising of medical devices (TV especially) as advertising costs no doubt add to the costs of medicare.

8. Repeal of the Bush directives depriving the public of care, (example: the “morning after” pill) permitting health care workers to refuse to fill prescriptions because of their personal religious affiliations.

9. Repeal the absurd “Medicare Prescription Plan,” and enact a reasonable alternative, without massive subsidies to the pharmaceutical and insurance industries. A plan that benefits the consumer and not the corporations.

10. A national law guaranteeing sick leave. The United States is one of a handful of nations without one. At least 145 nations provide such a right. At the same time guarantee paid maternity leave, as the USA is only one of five countries that do not guarantee same. The others are in Africa!

We can hope that, IF we can prevail on our elected representatives to pass universal, single payer health care, the public will again be able, in due time, to have an attending personal physician with whom they can establish rapport, as opposed to a (frequently off- hand) “provider” designated by the insurance industry — the industry that dominates, and obscenely profits from, the care generally available today. One may make an exception for those signed up for “boutique care,” available in some areas. We should remember that having a lot of “testing” done on you or your family may be a cop-out for the physician, so that he can see more patients in a limited period and still have time for his phone calls to the insurance carrier overseeing your care and directing your doctor. Medical care is not pure science; it was once based on mutual respect and caring. Better, in one’s last hours, to have on hand a caring physician than all the darned respirators and monitors that we have become used to.

1 Response to Dr.Stephen R. Keister : The Doctor and the Body Politic