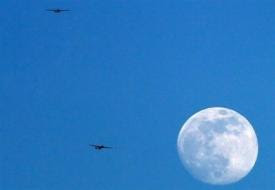 Israeli drones fly over the Gaza Strip in January 2009, as seen from Gaza City. According to the US-based Human Rights Watch, Israeli armed drones killed scores of Palestinian civilians during the Gaza war despite their cutting-edge targeting technology. Photo: AFP/File/Mahmud Hams.
When Drones Become Indiscriminate
By Jerrold Kessel and Pierre Klochendler / June 30, 2009

JERUSALEM – The concerted effort of international human rights activists to rein in violations of laws of war was given a major impetus when Human Rights Watch researchers presented a report Tuesday on the unbridled use by the Israeli military of unmanned combat aerial vehicles (UCLAV), commonly known as drones, during Israel’s 22-day assault on Hamas in Gaza at the beginning of the year.

Entitled ‘Precisely Wrong’, the Human Rights Watch (HRW) report focuses on six cases of Israeli drone-launched missile attacks in which 29 Palestinian civilians, eight of them children, were killed. Based on cross-referenced eyewitness accounts corroborated by doctors, as well as ballistics and forensic evidence collected on the attack sites, the report asserts that “in none of the cases did HRW find evidence that Palestinian fighters were present in the immediate area of the attack at the time.

Marc Garlasco, senior military analyst at the emergencies programme of HRW, estimates that at least 87 civilians were killed in 42 drone attacks. “Israel’s targeting choices are unacceptable and unlawful,” he declared at a press conference in East Jerusalem, “especially (considering) that UCLAV provide the most precise platform in the military arsenal, and that Israel is the world leader in drone technology.”

The report includes technical information about drones and drone-launched missiles. Israeli drones have advanced sensors, combining radars, electro- optical and infrared cameras, and lasers providing real time imaging by day and night. “Those sensors enable a drone operator to determine if a person on the ground is armed,” stressed Garlasco.

In addition to these high-resolution cameras, a missile fired from a drone has its own cameras that allow the operator to observe the target from the moment of firing. “If a last-second doubt arises about a target, the operator can divert the fired missile with a joystick,” the report notes.

Everything viewed by the drone operator is recorded. “There is no fog of war with such drones,” Garlasco said. “Yet, the Israeli army failed to distinguish between military objectives and civilians.”

According to Palestinian sources, 900 civilians were killed during the military operations, among a total of more than 1,400 killed. The HRW report says a third of the fatalities were from drone-launched missiles. Israeli sources put the civilian death toll at 300.

“HRW is not against the use of drone in warfare. Its accuracy and concentrated blast radius can indeed reduce civilian casualties,” Garlasco conceded. But “drones, much like sniper rifles, are only as good at sparing civilians as the care taken by the people who operate them.”

The Israeli army questions the credibility of the HRW investigation. “The report is based on anonymous Palestinian sources whose knowledge of military issues is doubtful, who are clearly not impartial observers, and who are part of the propaganda machine in Gaza,” it said in a statement.

“We conducted interviews separate from Hamas activists,” counters Garlasco. “If there were fighters, the interviews were stopped immediately; we just did not use them.”

Garlasco acknowledges that the testimonies collected are limited. “Mistakes can happen, but here there is a clear pattern – many civilians were killed. It seems Israeli rules of engagement were very loose – keeping Israeli casualties to a minimum, valuing the lives of soldiers more than those of Palestinian civilians.”

The report calls on Israel to conduct a “case-by-case investigation” into the use of drone-launched missiles. “Military or civilian personnel found responsible for committing or ordering unlawful drone attacks should be disciplined or prosecuted as appropriate.”

“This report has a look to the future,” says Garlasco. “It’s a cautionary tale to the U.S. continued use of UCLAV in Afghanistan and Pakistan.”

Human rights activists have increasingly voiced their concern over U.S. reliance on a drone-launched missile attack policy. In a stinging report submitted earlier this month to the Geneva-based UN Human Rights Council, UN special investigator Philip Alston charged that the U.S. has created “zones of impunity” by rarely investigating private contractors and civilian intelligence agents involved in the killing of civilians from drone attacks. Alston urged that an independent special prosecutor be charged with pursuing criminal allegations against government officials accused of wrongdoing.

“Even when you’re attacking a legitimate military objective, you cannot cause civilian casualties that exceed the value of a legitimate military attack,” says Garlasco. Still, the reliance on drone tactics – and the strategic cutting-edge drones increasingly provide – may surpass the power of human rights in international forums. Last week, Israel’s Channel Two revealed that Israel had conditioned the sale to Russia of a dozen drones, on Moscow not selling Iran advanced anti-aircraft missile technology. Iran has sought to deploy the Russian S300 air defence missile system against a possible Israeli attack on its nuclear facilities.

Moscow became aware of a need for advanced drones during its war with Georgia last summer. Georgia operated Israeli-made spy drones, which proved highly effective. The Russians used a drone of their own without great success. Russian military officials have made no secret of their intention to use Israeli models to improve their drone development programme.