Dumbing Down the War on Terror 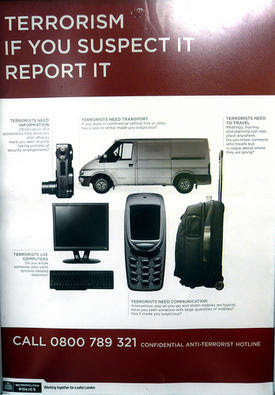 Dumbest salvo yet in the war on terror, courtesy of the London police
By Cory Doctorow / August 30, 2008

Today I spotted this sign at a Tesco’s grocery store in Islington, London — it might just be the single stupidest salvo in the war on terror to date, courtesy of the London Metropolitan Police:

Terrorism: If you suspect it, report it

TERRORISTS NEED TRANSPORTATION
If you work in vehicle hire or sales, has a sale or rental made you suspicious?

TERRORISTS NEED TO TRAVEL
Meetings, training and planning can take place anywhere. Do you know someone who travels but is vague about where they are going?

TERRORISTS USE COMPUTERS
Do you know someone who visits terrorism-related websites?

TERRORISTS NEED COMMUNICATION
Anonymous, pay-as-you-go and stolen mobiles are typical. Have you seen someone with large quantities of mobiles? Has it made you suspicious?

Translation: god help you if you worry about CCTVs in your neighbourhood, get into an argument at the car-rental agency, don’t feel like telling your co-workers that you go off to have regular dialysis treatments, look at websites that the guy next to you in the Internet cafe isn’t familiar with, or can’t get credit and use pay-as-you-go phones instead. After all, the police here don’t even need to charge you with a crime in order to lock you up for 42 days. Absolutely the stupidest salvo in the war on terror to date, Tesco’s, Islington, London, UK.