Dying Over the American Housing Crisis

Let’s be clear about the facts here: it’s okay to bail out the lenders who are in trouble, but we will ignore the home-buyers who cannot meet their mortgage payments.

Just another example of BushCo’s “we-don’t-give-a-flying-fuck” approach to America. “If you aren’t in my circle of corporate buddies, we don’t care.” 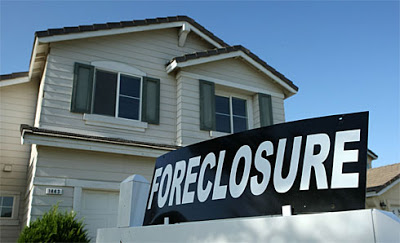 Foreclosures take an emotional toll on homeowners
By Stephanie Armour / May 15, 2008

On a brisk day last fall in Prineville, Ore., Raymond and Deanna Donaca faced the unthinkable: They were losing their home to foreclosure and had days to move out.

For more than two decades, the couple had lived in their three-level house, where the elms outside blazed with yellow shades of fall and their four golden retrievers slept in the yard. The town had always been home, with a lazy river and rolling hills dotted by gnarled juniper trees.

Yet just before lunch on Oct. 23, the Donacas closed all their home’s doors except the one to the garage and left their 1981 Cadillac Eldorado running. Toxic fumes filled the home. When sheriff’s deputies arrived at about 1 p.m., they found the body of Raymond, 71, on the second floor along with three dead dogs. The body of Deanna, 69, was in an upstairs bedroom, close to another dead retriever.

Their suicides were a tragic extreme, but the Donacas’ case symbolizes how the housing crisis is wrenching the emotional lives of legions of homeowners. The escalating pace of foreclosures and rising fears among some homeowners about keeping up with their mortgages are creating a range of emotional problems, mental-health specialists say. Those include anxiety disorders, depression and addictive behaviors such as alcoholism and gambling. And, in a few cases, suicide.
Crisis hotlines are reporting a surge in calls from frantic homeowners. The American Psychological Association (APA) and other mental-health groups are publishing tips on how to handle the emotional stress triggered by the real estate meltdown. Psychologists say they’re seeing more drinking, domestic violence and marital problems linked to mortgage concerns — as well as children trying to cope with extreme anxiety when their families are forced to move.

“They’re depressed, anxious. It’s affected marriages, relationships,” says Richard Chaifetz, CEO of ComPsych, a Chicago-based employee-assistance firm that is counseling homeowners over mortgage fears. “People tend to catastrophize, and that leads to depression. Suicide rates go up. We see an increase in drinking, outbursts at work, violence toward kids. Before, their houses were like ATMs,” as they rose in value. “Now, they feel trapped like a rat in a corner.”

Foreclosure filings surged 65% in April compared with the same month last year, according to a report Wednesday by RealtyTrac. One in every 519 households received a foreclosure filing last month, and the number of homes with foreclosure activity in April was the highest monthly total since RealtyTrac began issuing the report in January 2005.

Don Donaca, Raymond’s brother, says it’s hard to understand the suicide, but he thinks the pending foreclosure led to their deaths.

“He got so deep in debt he couldn’t figure out what else to do,” says Don, 74, a retired sawmill worker in Prineville. “I guess a guy would have to walk a few miles in his shoes to understand.”

Financial concerns at the top

Many other homeowners are at risk of less-severe, but still significant, psychological distress: One in seven homeowners worry that they won’t be able to make their mortgage payments on time over the next six months, according to an April Associated Press-AOL Money & Finance poll, and more than one-quarter fear their home will decline in value during the next two years.

ComPsych says financial concerns are now the top issue the firm’s counselors are hearing in calls from clients. Calls about financial worries have surged 20% over last year; those related to mortgage problems have doubled.

“It’s escalated to the No. 1 issue because of the housing crisis,” Chaifetz says.

Read all of it here. / USA Today