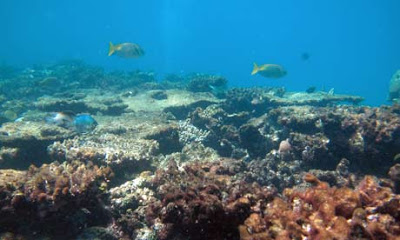 Reefs including the Great Barrier Reef off Australia could begin to break up within a few decades, research suggests. Photograph: Cathie Page
Climate deal may be too late to save coral reefs, scientists warn
By David Adam / October 27, 2008

A new global deal on climate change will come too late to save most of the world’s coral reefs, according to a US study that suggests major ecological damage to the oceans is now inevitable.

Emissions of carbon dioxide are making seawater so acidic that reefs including the Great Barrier Reef off Australia could begin to break up within a few decades, research by the Carnegie Institution at Stanford University in California suggests. Even ambitious targets to stabilise greenhouse gas levels in the atmosphere, as championed by Britain and Europe to stave off dangerous climate change, still place more than 90% of coral reefs in jeopardy.

Oceanographers Long Cao and Ken Caldeira looked at how carbon dioxide dissolves in the sea as human emissions increase. About a third of carbon pollution is soaked up in this way, where it reacts with seawater to form carbonic acid. Experts say human activity over the last two centuries has produced enough acid to lower the average pH of global ocean surface waters by about 0.1 units.

Such acidification spells problems for coral reefs, which rely on calcium minerals called aragonite to build and maintain their exoskeletons.

“We can’t say for sure that [the reefs] will disappear but … the likelihood they will be able to persist is pretty small,” said Caldeira.

The new study was prompted by questions by a US congressional committee on how possible carbon stabilisation targets would affect coral loss.

Carbon dioxide in the atmosphere has risen from 280 parts per million (ppm) before the industrial revolution to more than 380ppm now. Campaigners and politicians in Europe and the UK say a new global climate deal, which is expected to be agreed next year, must aim to limit CO2 to 450ppm, though scientists say that is unlikely and the world is heading for 550ppm or even 650ppm.

The research suggests that stabilising world carbon levels at 450ppm would still dump so much carbon dioxide in the oceans that only 8% of coral reefs would be surrounded by water with enough aragonite to maintain their structure. Some 7% of the ocean below 60 degrees south will see a shortage of aragonite, while parts of the high latitude ocean could see a pH drop of 0.2 units.

At 550ppm CO2 in the atmosphere, no coral reef would have access to enough of the mineral. Even stabilising CO2 at current levels would still leave some 60% of coral bathed in seawater with low aragonite levels.

The increased amounts of carbon dioxide going into the ocean will also affect other marine life, such as shellfish, that need the calcium mineral to build carbonate shells.

Writing in the journal Geophysical Research Letters, the scientists say the risk posed by carbon pollution to coral and marine life could justify a carbon stabilisation goal “lower than what might be chosen based on climate considerations alone”.

The UK’s Royal Society is preparing to issue a warning to policymakers on the issue, together with dozens of other international science academies.

Caldeira said the affected reefs would not disappear straight away, but that the change in water chemistry would leave them vulnerable to attack, bleaching or disease.

He said: “We’re losing the Arctic ice, it looks like we’re going to lose the coral reefs and we could lose much of the rainforest. I find it disconcerting that these ecosystems that have been around on Earth for a long, long time are no longer able to survive.”

This entry was posted in RagBlog and tagged Environment, Global Warming, Oceans. Bookmark the permalink.