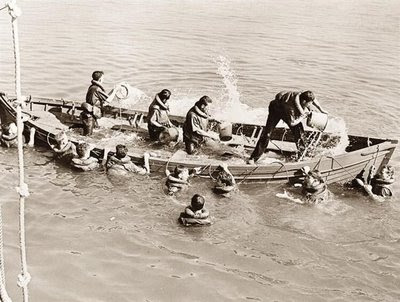 1943 photo of Merchant Marines bailing out of a lifeboat.
What good is money if you can’t spend it on stuff like oil, right?
By Roger Baker / The Rag Blog / September 10, 2008

Since Lehman Brothers investment bank (the type of bank relatively free of federal regulation) is too big to fail, and since South Korea seems disinclined to bail them out, it’s now a matter of conducting an awe-inspiring reorganization to impress potential investors.

If you have $65 billion in bad mortgage assets you have to peddle to prevent the feds from shutting you down, then you can start by sorting through your assets in a new way. This time you can throw out the “toxic waste” for whatever the market wants to pay and relabel the remainder with some investor confidence inspiring labels. Even if you might not care to invest in an outfit like Spinco, it would be harder to resist investing in Cleanco, right? It could work, although the bank stock investors seem to lack enthusiasm.

But if the worst happens, this tale will have a happy ending because the Fed will ride in to rescue the bank, as the lender of last resort for all the giant outfits deemed too big to fail, whoever they are. Then all the Fed has to do is print up enough money or print enough bonds to pacify all the bank creditors and life goes on as usual, right?

Except for the fact that all these newly available bailout dollars and federal IOUs are going to try to buy real stuff. What good is money if you can’t spend it on stuff like oil, right? Here is where that leads and what it implies.

“Due to the bloating federal deficit and the big-dollar promises the politicians have made, but that the US can’t possibly pay, further rapid growth in the money supply lies ahead. And that means more inflation, which means the dollar’s recovery will turn out to be temporary. And more debasement of the dollar equals higher gold.” — Asia Times

Now on to Lehman Brothers.

…The U.S. government cannot let Lehman fail because the systemic ripples would be too big,” said James Hyde, a banking analyst at London-based European Credit Management Ltd., which oversees $27 billion for clients and doesn’t own Lehman debt.

Goldman Sachs Group Inc., Morgan Stanley and Merrill Lynch, the three biggest U.S. securities firms, said yesterday after the close of regular trading in New York that they weren’t backing away from their smaller rival.

“Goldman Sachs is a willing counterparty to Lehman Brothers across all our businesses,” said Michael DuVally, a spokesman for Goldman. Spokespeople for Morgan Stanley and Merrill said their firms continue to trade with Lehman.

Citigroup Inc., the biggest U.S. bank by assets, UBS AG and Credit Suisse Group AG, the two largest Swiss banks, and BlackRock Inc., the biggest publicly traded U.S. fund manager, said they too continue to do business as usual with the firm.

Lehman has about $65 billion in mortgage-related assets that are losing value with the collapse of the real-estate market. Most of the portfolio, about $40 billion, is tied to commercial real estate holdings, which Lehman may spin off into a new company dubbed “Spinco,” people familiar with the matter said before the firm’s statement yesterday.

Lehman plans to announce it will sell a package of mostly British residential real-estate assets, the Wall Street Journal reported today, citing people it didn’t identify. The remaining portion, divorced of the most-distressed property assets, will be called “Cleanco,” the newspaper added…