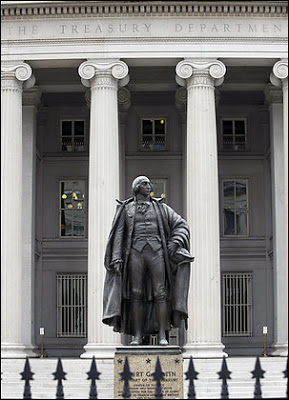 I’m no expert on these financial instruments, but as we used to say, it don’t take a weatherman to know which way the wind blows. I think peak oil has a whole lot to do with the credit worthiness of the institutions that these CDS underwrite. My main topic is Credit Default Swaps, but meanwhile, here are three key links having to do with the steady financially corrosive effect of peak oil on the overall world economy and corporate profitability. It takes a real optimist these days to think that world oil production has not already peaked, given the fact that production hasn’t increased significantly in two years despite soaring oil prices:

Credit default swaps are basically paper guarantees traded among financial institutions that the corporations and financial institutions that underlie the US and world economy, and which guarantee that these institutions will operate soundly in the future and be able to repay their debts. What is alarming is their magnitude, proliferation, and non-transparency. The fact is that these debt repayment insurance policies are key elements in assuring the financial health of the US economy, and a major reason that the Federal Reserve had to bail out investment bank Bear Stearns on an emergency basis.

How many of them are scattered throughout the financial institutions of Wall Street? The total CDS value is now about $62 trillion, up from just $4 trillion in the last five years! This current total is now about equal to the entire annual world economy, calculated to be about $65 trillion by the CIA. Total external world debt of all types is calculated to be nearly as great, at $54 trillion.

The main tool to prevent a cascading chain reaction of CDS insolvency seems to be more Federal Reserve bailouts of the Bear Stearns type. Here are key links and documentation of the risk of a financial meltdown that they pose. A Federal Bailout basically means that US taxpayers rather than private investment banks are assuming the burden of debt, but this debt just inflates the current debt bubble further at public expense.

Meanwhile, commodity price increases due to peak oil and cost-push inflation have recently been on an accelerating upward trend (this factor has diminished at least temporarily; good discussion in the current Economist) that undermines the profitability of the global market economy. Since all manufacture relies on commodities, this factor decreases profits and increases the risk of corporate loan defaults.

Federal Reserve chair Bernanke at Woods Hole does not seem to be very cheerful these days, partly because stagflation (strongly linked to cost-push inflation due to energy price increases) appears to be becoming international in character; “View of economy somber from Fed mountain retreat.”

Last year the problem was CDOs. Now the Bear Stearns bailout shows that the financial consequences of preventing bank runs due to CDS on the part of the fed is thought to be necessary on an emergency basis, even over the weekend. At some point such emergency measures may not work to damp down a panic wherein everyone runs to their investment bank and tries to cash in their share of the towering mountain of speculative CDS diffused throughout financial institutions. Also see the book “The Trillion Dollar Meltdown” by Charles Morris.

“A credit default swap (CDS) is a credit derivative contract between two counterparties, whereby one makes periodic payments to the other and receives the promise of a payoff if a third party defaults[1]…

…because there is no requirement to actually hold any asset or suffer a loss, credit default swaps can also be used for speculative purposes…

Warren Buffett famously described derivatives bought speculatively as “financial weapons of mass destruction.” In Berkshire Hathaway’s annual report to shareholders in 2002, he said, “Unless derivatives contracts are collateralized or guaranteed, their ultimate value also depends on the creditworthiness of the counterparties to them…

IN THE weeks before Bear Stearns, a Wall Street bank, collapsed in March, nervous investors scanned not just its share price for a measure of its health, but the price of its credit-default swaps (CDSs), too. These once-obscure instruments, now widely enough followed that they have even earned a mention on an American TV crime series, clearly indicated that the firm’s days were numbered. The five-year CDS spread had more than doubled to 740 basis points (bps), meaning it cost $740,000 to insure $10m of its debt. The higher the spread, the greater the expectation of default.

Once again, CDS spreads on Wall Street banks are pushing higher, having fallen in March after the Federal Reserve extended emergency lending facilities to them…

There are some who doubt whether the CDS market is a reliable barometer of financial health. Though its gross value has ballooned in size from $4 trillion in 2003 to over $62 trillion, many of the transparency, and are prone to wild swings…

Pressure Guage: Are credit-default swaps living up to the hype? / Economist.com / August 21, 2008

1 Response to ECONOMY : The Cascading Effect of Peak Oil