Ed Felien : Is the Terror in Norway an Isolated Act? 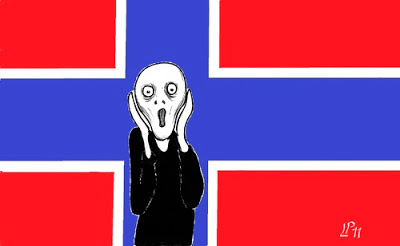 Political cartoon by Paolo Lombardi / toonpool.
The parallels are ominous:
Terror in Norway

There are organizations that support the ideas of McVeigh and Breivik, and there is a culture that supports murder and violence as legitimate means to realize those ends.

He then took a 20 minute ferry to an island where the Labor Party held a summer camp for young people. Wearing a police sweater, he told some of the young people that he wanted to talk to them about the bombing and then opened fire and shot them at point blank range. He killed 68 before the police arrived and he surrendered.

Until recently, Breivik was an active member of the Progress Party. With 41 seats it is the second largest party in Parliament after the Labor Party. The party tripled its support in 1987 when the leader at that time, Carl Hagen, told his supporters, “The asylum seekers are on their way to take over our fatherland,” and read from a letter supposedly from a Muslim, which said, “This country will be Muslim! We give birth to more children than you, and several true-believing Muslims arrive in Norway every year, men in productive age. One day the infidel cross in the flag shall also go away!”

The so-called Mustafa letter was proven in court to be a fraud, but it had its desired effect in galvanizing anti-immigrant sentiment.

The 2009 national election was quite dramatic. It looked for a while that the Labor Party would lose after ruling Norway for over 60 years, but the Progress Party got into arguments with its coalition partners and looked confused, and voters lost confidence in their capacity to govern. In the end the Labor Party was able to put together a coalition of socialists and progressives that formed a government.

This defeat was a heavy blow to Breivik, and in his manifesto he denounced members of this party as “politically correct career politicians” who were not prepared to “take risks and work for idealistic goals.”

The model for Breivik must have been Hitler’s Beer Hall Putsch in 1923. With a gang of about 600 thugs in SA uniforms, Hitler was able to take over a right-wing meeting of about 2,000 people in a beer hall in Munich. Using the threat of violence to hold his audience (he had a machine gun trained on the door) Hitler won over the audience with his extemporaneous speech about how Germany had been betrayed by the liberal Weimar government, by the Treaty of Versailles and by the international Jewish conspiracy.

They marched on the Bavarian Defense Ministry and were stopped by about a hundred state police officers. A gunfight began and four police officers and 16 Nazis were killed.

Hitler was arrested, tried, and sentenced to five years and given a small fine. He served eight months in a comfortable cell where he received visitors and wrote Mein Kampf. Breivik took no chances and wrote his Mein Kampf, the 1516 page manifesto “2083: A European Declaration of Independence,” before he acted.

The putsch and trial gave Hitler what he needed — a platform on which to address the German nation. On Jan. 30, 1933, President Hindenburg appointed Adolf Hitler chancellor of Germany. Less than a month later the Reichstag was set on fire.

Most scholars now agree that Hitler’s group talked a Dutch communist into setting the fire so Hitler and Goring could use that as an excuse to murder communists and socialists. Almost the first three-quarters of Mein Kampf is about how the communists and socialists had betrayed Germany and how they must be punished severely. Only the last quarter of the book talks about Jews.

From 1933 to 1938 the Nazis rounded up leftists and either murdered them outright or sent them to concentration camps. Only after Kristallnacht on Nov. 9, 1938, did the Nazis begin to round up the Jews.

Breivik writes about the Islamification of Europe, but he targets first the left. He deliberately set out to murder the next generation of leaders of the Labor Party, and what took truckloads of Nazi stormtroopers months to accomplish, Breivik did in 90 minutes.

Can it happen here?

It already did, and it was much worse.

Timothy McVeigh blew up the federal building in Oklahoma City on April 19, 1995, and killed 168 people. He claimed the bombing was in retaliation for the federal government raid on the Waco religious commune that ended in the deaths of 55 adults and 21 children. McVeigh went to gun shows and was certain the government wanted to take away his right to bear arms. His conservative views on morality and taxes would strongly resonate with Breivik and the Norwegian Progress Party.

He wrote a letter to a local newspaper in 1992:

Taxes are a joke. Regardless of what a political candidate “promises,” they will increase. More taxes are always the answer to government mismanagement. They mess up. We suffer. Taxes are reaching cataclysmic levels, with no slowdown in sight. […] Is a Civil War Imminent? Do we have to shed blood to reform the current system? I hope it doesn’t come to that. But it might.

The book he considered his bible was The Turner Diaries by William Luther Pierce, the former leader of the white nationalist organization National Alliance. The book calls for a violent revolution by the far right that eventually leads to the extermination of all Jews and non-whites.

Are McVeigh and Breivik madmen acting alone, or are they part of a movement?

Do their basic ideas have currency in mass organizations?

Consider the racial hatred embedded in the mass e-mailing from MinutemanHQ.com:

Enough is enough! The line has to be drawn! The invasion of America has to end! Justice has to be done for all the good, honest, Americans who have been killed, raped, kidnapped, stolen from, and abused by criminal illegal immigrants! American sovereign territory must be DEFENDED and HELD SECURE!! THE HOUR IS LATE, MAKE THEM HEAR US — it is the right thing to do!

So, about 20 little old ladies, like me, gathered in a public park in Oregon to have a picnic and a meeting.

They were then run off by a group of Tea Party activists, led by the local head of Americans for Prosperity. They retreated to a private dwelling, but the teabaggers followed them there, and had to be stopped from trespassing on private property. The police conveniently contacted the group two hours later to find out if the cops were still needed.

And these stupid tea baggers, instead of understanding that you cannot “free America” and “stop socialism” by denying people the right to gather in a public park, proudly posted the video on YouTube like they’d done a great thing.

There are organizations that support the ideas of McVeigh and Breivik, and there is a culture that supports murder and violence as legitimate means to realize those ends. The violence in movies, on television, and in popular song is pervasive and addictive. The adrenalin thrill of video games is simulation training for actual combat.

Breivik wrote in his journal in February 2010 that he “just bought Modern Warfare 2, the game.” He says it’s “probably the best military simulator out there. You can more or less completely simulate actual operations.”

But more than anything else, the wars against Iraq, Afghanistan, Pakistan, Yemen, and Somalia fuel the violence and the xenophobia. We are at war with the Muslim world, no matter how much our government denies it. And this war allows us to hate and fear Muslims and Arabs, and this makes it easier to hate and fear Mexicans because they may want to steal our jobs. We want the government to do something about it, and when they don’t solve the problem right away, they’re weak at best and traitors at worst.

These are the conditions that went before the Beer Hall Putsch, before Mussolini’s March on Rome, before Franco’s march on Madrid. Our wars abroad can easily lead to wars at home:

It seems ironic and hypocritical that an act viciously condemned in Oklahoma City is now a ‘justified’ response to a problem in a foreign land. Then again, the history of United States policy over the last century, when examined fully, tends to exemplify hypocrisy.

“When considering the use of weapons of mass destruction against Iraq as a means to an end, it would be wise to reflect on the words of the late U.S. Supreme Court Justice Louis Brandeis. His words are as true in the context of Olmstead as they are when they stand alone: ‘Our government is the potent, the omnipresent teacher. For good or for ill, it teaches the whole people by its example.’