Ed Felien : Obama and the Lies About Libya 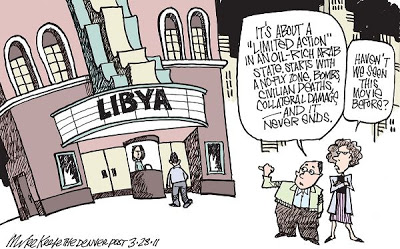 Barack Obama tried to explain the U. S. war against Libya on Monday, March 28, and he said a number of things that simply are not true.

He said, “Gaddafi has lost the confidence of his people.” Compared to most other Arab countries, Gaddafi seems to enjoy widespread if not universal support. The city of Benghazi is an isolated exception. Thomas C. Mountain has been following events in Libya for 25 years. Here is his assessment:

In 1969 when Col. Gaddafi came to power by overthrowing the Libyan king in a military coup, Libyans were one of the poorest people in the world with an annual per capita income of less than $60.

The free public health system in Libya is one of the best in the Arab world and Libya’s free education system up to the graduate level is as good if not better than any other in the region.

So the question is, why has a revolt broken out?

The answer, which I have been intensely researching for the past month is not a simple one.

The revolt started in Benghazi in eastern Libya. A very important point not mentioned anywhere in the international media is the fact that due to geographic location, being one of the closest points to Europe from the African continent, Benghazi has over the past 15 years or so become the epicenter of African migration to Europe. At one point over a thousand African migrants a day were pouring into Libya in hopes of arranging transport to Europe.

The human trafficking industry, one of the most evil, inhumane businesses on the planet, grew into a billion dollar a year industry in Benghazi. A large, vicious underworld mafia set down deep roots in Benghazi, employing thousands in various capacities and corrupting Libyan police and government officials. It has only been in the past year or so that the Libyan government, with help from Italy, has finally brought this cancer under control.

With their livelihood destroyed and many of their leaders in prison, the human trafficking mafia have been at the forefront in funding and supporting the Libyan rebellion. Many of the human trafficking gangs and other criminal elements in Benghazi are known for racist pogroms against African guest workers where over the past decade they regularly robbed and murdered Africans in Benghazi and its surrounding neighborhoods.

Since the rebellion in Benghazi broke out several hundred Sudanese, Somali, Ethiopian, and Eritrean guest workers have been robbed and murdered by racist rebel militias, a fact well hidden by the international media.

Benghazi has also long been a well-known center of religious extremism. Libyan fanatics who spent time in Afghanistan are concentrated there and a number of terrorist cells have been carrying out bombings and assassinations of government officials in Benghazi over the past two decades. One cell, calling itself the Fighting Islamic Group, declared itself an Al Queda affiliate back in 2007. These cells were the first to take up arms against the Libyan government.”

Obama said, “Gaddafi chose to escalate his attacks.” From the outset the Libyan revolt was different from the rest of the nonviolent revolts in the Middle East and North Africa: it was a violent revolt led by gangster elements and Islamic fundamentalists. The press has conveniently ignored this distinction.

Obama said, “I authorized military action to stop the killing and enforce UN Security Council Resolution 1973.” The very first statement of the UN resolution says, “1. Demands the immediate establishment of a ceasefire and a complete end to violence and all attacks against, and abuses of, civilians;” The U.S. has spearheaded an offensive against Libyan forces in direct violation of a ceasefire and an end to violence.

The resolution, “Decides to establish a ban on all flights in the airspace of the Libyan Arab Jamahiriya in order to help protect civilians;” The U.S. with its allies has established air superiority, but it is not complying with the ban on all non-humanitarian flights. It is not possible to verify, but it is very likely that the U.S. is sending mercenaries and arms to aid the rebels in direct violation of the UN Resolution establishing an arms embargo.

Obama said he had promised “we would not put ground troops into Libya.” While it is obviously true that no combat troops in uniform have landed on “the shores of Tripoli,” it seems very likely that with hundreds of thousands of paid mercenaries in the immediate area and tons of military hardware, the U.S. is most certainly playing a covert support role to the rebels with boots and guns on the ground.

And the Obama administration has admitted that CIA operatives have been on the ground with the rebels (in violation of the UN resolution) for more than three weeks.

Obama said, “Our military mission is narrowly focused on saving lives.” Clearly the mission is to support the rebels, continue advancing to Tripoli and overthrow Gaddafi.

Then Obama tried to articulate the Obama Doctrine to justify intervention,

Some question why America should intervene at all — even in limited ways — in this distant land. They argue that there are many places in the world where innocent civilians face brutal violence at the hands of their government, and America should not be expected to police the world, particularly when we have so many pressing concerns here at home.

In Bahrain the King brought in foreign troops from Saudi Arabia to fire on protesters, and the U.S. did nothing. There have been demonstrations against the feudal autocracies in Morocco and Saudi Arabia and the U.S. did nothing. We have been mildly critical of President Saleh, but we continue to supply him with guns and technical support to suppress dissent. We are outspoken against Syria because Syria, like Libya, is a socialist country.

Most people in the world understand that the main reason the U.S. and NATO want to bring down the Libyan government is because they produce millions of gallons of oil, and a more sympathetic government would make it more profitable for American and British oil companies to do business there.

Obama concluded his explanation by saying, “That is why we are going after al Qaeda wherever they seek a foothold.” This was the most bizarre lie of the evening. Gaddafi has been fighting al Qaeda since 1995. Al Qaeda elements were part of the Benghazi uprising. We are allied with al Qaeda. They are a major part of the rebels.

In an interview with the Italian newspaper Il Sole 24 Ore, Abdel-Hakim al-Hasidi, who fought against the U.S. in Afghanistan, said he has recruited around 25 men to fight against Gaddafi. According to Praveen Swami of the Guardian, “U. S. and British government sources said Mr. Al-Hasidi was a member of the Libyan Islamic Fighting Group, or LIFG, which killed dozens of Libyan troops in guerrilla attacks around Derna and Benghazi in 1995 and 1996.”

Obama knows we are allied with al Qaeda. He knows there has been a civil war in Libya between the secular, feminist, and socialist government of Gaddafi and Islamic fundamentalists for almost 20 years.

Politics makes strange bedfellows. The major theme of American foreign and domestic policy for the last hundred years has been anti-communism. From the intervention against Russia in the 1920’s and the Red Scare in the U.S., through the Cold War and the McCarthy hearings, American foreign and domestic policy has been driven by a defense of capitalism and a hatred of socialism or communism.