Ed Kilgore : The Rise of the ‘Teavangelicals’ 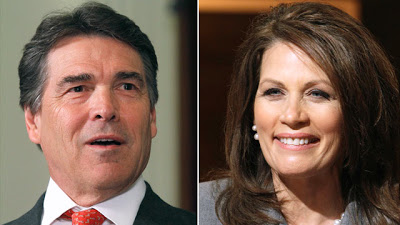 Rick Perry and Michele Bachman represent the marriage of the Religious Right and the Tea Party Movement. Image from ABC News.
Teavangelicals:
How the Christian Right came to bless
the economic agenda of the Tea Party

According to received wisdom, the Christian Right is engaged in a tactical alliance with more secular-minded conservatives in the Republican Party.

The pairing was established as far back as 1980, when Ronald Reagan made unambiguous support for social-conservative priorities (especially the abolition of abortion rights) GOP orthodoxy and earned the support of conservative evangelicals who had been politically mobilized and then bitterly disappointed by Jimmy Carter.

The relationship has sometimes been compared to a “marriage of convenience,” and indeed, Christian Right leaders have never been reluctant to complain that they are being taken for granted and underserved by their political partners.

Given this background, one might assume that Christian Right leaders would be exceptionally nervous about the ascendancy of the Tea Party Movement, with its libertarian streak and its fixation on fiscal issues. But as it turns out, Christian Right elites, for their own peculiar reasons, have become enthusiastic participants in the drive to combat Big Government and its enablers in both parties.

It’s no accident that one red-hot candidate for president, Michele Bachmann, and a much-discussed likely candidate, Rick Perry, each have one foot planted in the Christian Right and another in the Tea Party Movement.

To a remarkable extent, today’s theocrats have stopped thinking of “social issues” like abortion or gay marriage as isolated from or in competition with fiscal or economic issues, and started thinking of them as part and parcel of a broader challenge that requires the radical transformation of government itself.

On an institutional level, the merger of Christian Right and Tea Party interests is remarkably advanced. The alliance has served as the very foundation stone of the Faith and Freedom Coalition, the latest venture of that intrepid politico-religious entrepreneur, Ralph Reed, which has sprouted chapters in many states, most prominently Iowa, where it sponsored the first candidate forum of the 2012 cycle.

There is even a term to describe this new strain of conservatism: the “Teavangelicals,” a subject of a recent broadcast by Christian Right journalist David Brody, which, among other things, examined the conservative evangelical roots of major Tea Party leaders. Most recently, a host of organizations closely connected with the Christian Right and “social issues” causes have signed onto the “Cut, Cap and Balance Pledge,” the Tea Party-inspired oath that demands a position on the debt limit vote that is incompatible with any bipartisan negotiations.

But this convergence between the two groups goes well beyond coalition politics and reflects a radicalization of conservative evangelical elites that is just as striking as the rise of the Tea Party itself. Indeed, the worldview of many Christian Right leaders has evolved into an understanding of government (at least under secularist management) as a satanic presence that seeks to displace God and the churches through social programs, to practice infanticide and euthanasia, to destroy parental control of children, to reward vice and punish virtue, and to thwart America’s divinely appointed destiny as a redeemer nation fighting for Christ against the world’s many infidels. 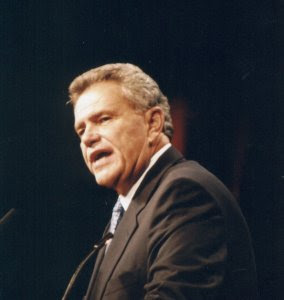 Right wing televangelist James Robison.
As an illustration of this phenomenon, it’s worth unpacking a few lines from a recent missive by televangelist James Robison, the convener of two recent meetings of Christian Right leaders in Texas to ponder their role in 2012, and also of a similar session back in 1979 that helped pave the way for Reagan’s conquest of conservative evangelicals. Says Robison:

There are moral absolutes. No person’s failure reduces or redefines the standards carved in stone by the finger of God and revealed in His Word. We must find a way to stop judges and courts from misinterpreting the Constitution and writing their own laws.

“Activist judges” who have developed and applied protections for abortion rights, non-discrimination, and church-state separation have long been a bugaboo for the Christian Right. But Robison appears to be extending this traditional list of evangelical grievances, adding his blessing to the Tea Party’s objection to the string of Supreme Court decisions that enabled the federal government to enact New Deal programs like Social Security that protect people afflicted by personal “failure” from the consequences of their actions. He continues:

Success and prosperity may be mishandled by some, but the potential for success that produces opportunity for all and prosperity at different levels is not the problem. Those we elect must keep the free market free, healthy and under the influence of people who understand the importance of personal responsibility.

Here Robison lends his religious faith to an endorsement of the moral superiority of capitalism, while brushing aside concerns about inequality. His free-market fervor is grounded in a conception of government as a blasphemous substitute for God when it comes to “picking winners and losers.” He comes out and says the same thing more directly in the following:

Depending on the federal government as our source is idolatry. We must control it, or it will control us. Stop the madness! Hitler believed that Germany needed a government over the people, not of the people. God deliver us from this kind of insanity.

Identification of liberals with the Nazis is an old Christian Right habit, usually focused on the “holocaust” of legalized abortion. Here, though, Robison seems to be extending the analogy to all forms of dependence on the federal government for social benefits. Finally, on spending:

In other words, to Christian Right leaders like Robison, it appears that both Keynsian economics and tax increases have become “as wrong and immoral as stealing.” As with his attacks on judges that let bureaucrats help people who have failed to live up to God’s eternal standards, he sounds like an incongruous Christian Ayn Rand.

Robison’s agenda, as long-time observer of the Christian Right, Sarah Posner, explains at Religion Dispatches, “reads like a theo-economic merger of a religious right and Tea Party wishlist.” And he’s hardly alone in his views, notes Posner:

The players in Robison’s meetings reflect this agenda. They include Jim Garlow, the California pastor instrumental in the California Proposition 8 fight who now runs Newt Gingrich’s Renewing American Leadership, and Harry Jackson [a close advisor of Herman Cain], who relentlessly opposed D.C.’s gay marriage law; religious right historian David Barton; Richard Land of the Southern Baptist Convention and Tony Perkins of the Family Research Council; [and] Rod Parsley , who, like John Hagee, is apparently making a comeback after being rejected by McCain in 2008…

After examining the beliefs of the contemporary Christian Right, candidates like Bachmann and Perry seem less like pols cleverly straddling factions and more like leaders of a single constituency. In particular, the fiery “constitutional conservatism” espoused by many of them reflects a belief in a God-given Founders’ design that equally demands limited government, absolute property rights, a ban on abortion (including some forms of contraception) and same-sex relationships, the right to a Christian education, a stern attitude towards economic “losers,” and hostility to foreign countries other than Israel.

When the Christian Right leaders convened by James Robison come together in Houston on August 6 at Rick Perry’s invitation to hold a “national call to prayer for a nation in crisis,” it may or may not be connected to a presidential run by its host. But it will illustrate that the Christian Right is hardly dead or asleep, and is no longer by any means at odds with the fiscal and economic radicalism gripping the rest of the conservative movement.