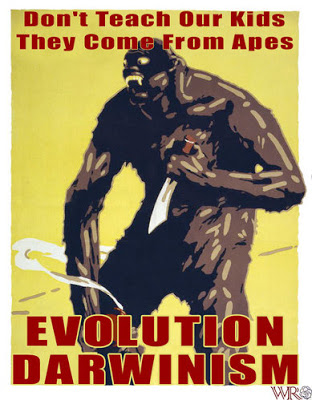 Image © Austin Cline, Licensed to About; Original Poster: Library of Congress
The State Board of Education does its part to fantasize biology
By Andrea Grimes

There’s nothing the evil overlords of the fictional future like more than a nice, healthy round of brainwashing. Whether it’s George Orwell’s totalitarian government of Oceania thwarting rebellious citizens in 1984, the “conditioning” of children in Brave New World, or the large-scale human reprogramming in The Matrix, mind control is all the rage for governments looking to cultivate a herd of submissive subjects. And it’s so simple, too! All that’s necessary are a few moldable minds and a strict party line.

But here’s a bit of nonfiction: The Texas State Board of Education has just those two things. Moldable minds, in the form of Texas schoolchildren, and a party line that favors teaching the “weaknesses” of biological evolutionary theory and, by implication, the strengths of the latest pseudo-scholarly variation on creationism: “intelligent design.” Last fall, in the latest episode of that eternal Texas struggle, the Texas Education Agency, which is regulated by the SBOE, fired its science director for distributing information about a pro-evolution seminar. And now, the SBOE is beginning hearings on updated science curricula that teaches the “strengths and weaknesses” of evolutionary theory.

It’s the latest in an ever-evolving effort by religious conservatives to discredit evolution after efforts to explicitly incorporate intelligent design have repeatedly failed. Lessons in Weak Evolution could be coming to a Texas public school near you by March 2009.

The first of several hearings on the science curricula updates occurred July 17 and 18, with this first meeting dedicated only to the delicate bureaucratic process of planning on how to plan those updates. According to SBOE chair and College Station dentist Dr. Don McLeroy, this year’s “battle is to bring in some of the weaknesses of evolution,” to ninth- and 10th-grade biology classrooms, retaining language requiring that teachers instruct students in the “strengths and weaknesses” of scientific theories. But according to the Texas Freedom Network, a statewide organization that works to mitigate the influence of fundamentalism on state policy, it’s really just one singular theory that gets the critical treatment.

“The only theory they attack is evolution,” said Dan Quinn, Texas Freedom Network’s communications director. Heliocentricity, gravitational theory, and atomic structure all get the SBOE thumbs-up. Indeed, despite clearly worded endorsements of evolution’s validity as scientific fact from the National Academy of Sciences, the American Association for the Advancement of Science, the Science Teachers Association of Texas, and countless other scientific groups, McLeroy and six other conservative members of the 15-member SBOE remain unconvinced.

“I don’t think the evidence supports [evolution],” said McLeroy, a self-described creationist who believes that because “science is always trying to find problems with stuff,” evolution should not be presented as absolute fact. In McLeroy’s opinion, there are three major weaknesses of evolutionary theory that schoolchildren should be made aware of. He arrived at these conclusions by “reading everything [he] could get [his] hands on” and listening to podcasts.

First weakness: the fossil record. “There are gaps,” said McLeroy, that do not include enough transitional forms of life to support evolution. Second, McLeroy says there has simply not been enough time on Earth for the minute changes required by evolution to have taken place. Thirdly, McLeroy says the incredible complexity of cells proves divine design. Information contained in the genetic code is just too mind-blowing to have come from anywhere but an intelligent creator. “Where did this information come from?” McLeroy mused. McLeroy would like to see these assertions and more taught in Texas biology classrooms.

I asked University of Texas integrative biology professor David Hillis, a member of the National Academy of

Sciences, about McLeroy’s list of “weaknesses.” In an e-mail exchange, Hillis said McLeroy was simply denying facts. “There is indeed a vast record of transitional fossils,” wrote Hillis, saying McLeroy’s fossil record claims are “completely at odds with the experts in the entire field of paleontology.”

As for McLeroy’s second assertion regarding length of time required for evolution to have taken place, Hillis wrote that the position “demonstrates an extraordinary ignorance of biology,” since rates of evolution observed in laboratory tests have been “more than sufficient” to prove natural rates of genetic change that coincide with the fossil record.

Finally, McLeroy’s cell-complexity argument does not even belong in a scientific discussion, wrote Hillis: “The argument that ‘It is too complicated, so God must have done it’ is not a scientific argument.”

And yet it appears that, all evidence to the contrary, evolution may still soon be taught in Texas as a weak theory. Since the SBOE has a near majority of anti-evolution members, the small problem of evolution actually being demonstrable scientific knowledge is only a political challenge to those who want schoolchildren taught otherwise.

Forward Into the Past

McLeroy says he and his board allies can persuade the swing votes necessary to give the board a good chance of advancing a weak-evolution curricula. Indeed, the persuasion skills of the conservative seven have already been demonstrated earlier this year, when Texas’ English standards were revised. In May, the SBOE rejected the recommendations of an $85,000, two-year study conducted by English teachers and curriculum experts in favor of a group of standards favored by McLeroy and his fellow conservatives. It was submitted just prior to adoption, without time for board or public review, yet passed with a contentious 9-6 vote.

The board’s dominance by anti-evolution sentiment, coupled with conservative Republican rule at the Capitol, has had a direct effect on agency policy. Last November, TEA Director of Science Chris Comer was forced to resign after she forwarded an e-mail to academic groups containing information about an anti-creationism seminar. The e-mail, which contained a one-line “FYI” from Comer and a forwarded event listing, was considered an inappropriate endorsement of evolution by TEA officials. They insist Comer’s effective termination was simply a personnel matter involving an employee unwilling to follow agency policy and that evolution has nothing to do with it.

Earlier this month, Comer filed a federal lawsuit against the TEA and its official policy of “neutrality” on the subject of creationism. Comer alleges that the agency policy is a violation of the First Amendment. Because creationism is a religious belief, her pleadings state, “The [TEA’s] ‘neutrality’ policy has the purpose or effect of endorsing religion.” In the lawsuit, Comer asks to be reinstated to her position as the TEA science director.

It’s worth noting that part of the TEA and SBOE’s duty statement includes a goal to “prepare today’s schoolchildren for a successful future.” If the weak-evolution curricula passes, Texas schoolchildren will be able to achieve that success in one of two ways: fly out of state for biology class and be back in time for lunch or set their sights on excelling at Jerry Falwell’s Liberty University.

Texas Freedom Network’s Dan Quinn believes weak-evolution curricula will set back the education of Texas schoolchildren. He says Texas will have a hard time getting its high school graduates admitted to top universities, or attracting science-oriented businesses, if it develops an anti-science reputation.

“Are we going to give our kids a 19th century education in the 21st century?” Quinn asked. If the SBOE has its way, the answer is likely to be yes.