It’s more trick than treat for the hunger strikers at this Texas immigrant family detention center. 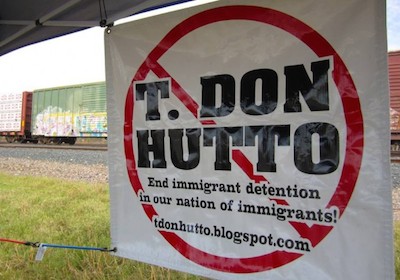 Trick or treat: Immigrant women languish in this for-profit prison.

As we sat in the waiting area of the Hutto “Residential” Center, an unexpected spectacle unfolded before the three of us who had come to visit. It was Halloween in Hutto.

Originally Peggy Morton and I had planned to take Maria Luisa, Field Organizer for the School of the Americas Watch (SOAW), to Karnes, another family detention center in Texas, that morning. It was October 30, when thunder and torrents of rain poured down on the hill country.

Still, I left my apartment on St. John’s at 8. In the time it took to walk from my building’s entrance to my car, I was soaked to the bone. Driving south on Lamar was an exercise in focus and I’m sure I cashed in a few of my good karma points as I drove with limited vision and somehow got to Wheatsville South at nine to meet them.

Peggy’s husband, Fred, had told her that a tornado had touched down in San Marcos — near our usual route to Karnes. We went to Peggy’s house where my wet clothes were put in the dryer. We decided that if the rain slowed down we would go north, rather than south — and visit with women at Hutto. Their hunger strike had just begun and we agreed that visiting there would be an excellent first visit to a Detention Center for Maria Luisa.

Over cups of hot tea and vegan pozole, the three of us shared stories about immigration.

Over cups of hot tea and vegan pozole, the three of us shared stories about immigration, violence shaped and honed by this country’s military might and the extraordinary connectedness of decades of violence in Central America and the number of refugees coming across the border.

Maria Luisa Rosals had come to Austin on a southern/border states journey to learn about conditions here and share knowledge about the complicity of USian interests as manifest in the instruction of violence at the School of the Americas.

Protests began in 1990 at the School of the America’s base at Fort Benning outside of Columbus, Georgia, and have continued despite the change of name to the Western Hemisphere Institute for Security Cooperation (WHINSEC). In a few weeks, the vigil will have its 25th anniversary. Many readers of The Rag Blog are familiar with the organization and its work. For those of you who aren’t, I refer you to the SOA Watch website — because the story today is really about the 27-plus immigrant women on hunger strike in Taylor, Texas.

Though as Peggy, Maria Luisa, and I spoke, it became obvious to us that, in fact, the hunger strike of immigrant women incarcerated under U.S. policy is very much related to the work of the SOAW. Peggy, an active member of the Hutto Visitation Program, has been visiting a woman who has been incarcerated there for over a year. As is my custom, I will not refer to her by her real name. Let’s call her Juana. All three of us signed up to visit Juana, who greeted us with delight.

The Corrections Corporation of America continues to assert ‘there is no hunger strike.’

Although the Corrections Corporation of America (CCA), the private business that runs Hutto, continues to assert “there is no hunger strike,” we were assured that the strike was real. Moreover, the women are highly motivated and optimistic. I asked Juana if I had her permission to mention her in my writing and she said that the women wanted “everyone” to know that, Yes, they are on hunger strike and that No, it’s not because the food is so bad (even though it is terrible) and it is an insult for whoever is telling those lies (hmmm, the CCA comes to mind) to pretend it is not about the absolute injustice that they are incarcerated for their attempt to escape from domestic, cartel, and state violence.

We laughed and exchanged stories about our families and talked a lot about tamales. Peggy was worried that talking about food wasn’t a good idea — but it seemed to cheer Juana — talking about something from her culture. When Maria Luisa and Juana discovered they were from the same area in Guatemala, there were broad smiles and, I believe, some comfort to Juana. In front of her was someone who knew where she came from — and had also come to the U.S. as an immigrant.

It seems that our visit to Hutto took place on the day that the CCA had encouraged its employees to costume up for Halloween. I’m serious. As we sat in the waiting room we watched as an angel in black tulle and a black halo left. A Thor-like Viking came on shift. The costumes were elaborate and at one point Maria Luisa and I caught each other’s glance and I whispered, “This is surreal.” Her eyes widened in agreement.

In the visiting area, the guard was straight out of the Flintstones. When Juana began to cry, I went up to the guard to ask for some tissue. I remarked on her costume, casually asking, “So, what are you?” She broke into a large smile (the first I’d seen) and said, “I’m a cave woman.” Fortunately, she didn’t appear to have a club. I wouldn’t swear, however, that she didn’t have one, hidden under the desk.

While immigrant women languish in this for-profit prison, the jailers play out their domination fantasies.

While immigrant women languish in this for-profit prison, the jailers play out their domination fantasies as Dark Angels, Vikings, and Neanderthals. Juana shook her head at the strangeness of the display. I suggested that Halloween was kind of like carnival and she managed a crooked smile. As we left, and we had our final hug (one is permitted at the beginning and another at the end of a visit), she again asked me to make sure to tell as many people as possible about their strike and how unjust is their detention.

In the days that have passed since I started this piece, participation in the hunger strike has grown enormously. This coming Saturday, November 7, 2015, there is a call to come to Taylor and show your support for the hunger strikers.

Sofia Casini of  Grassroots Leadership reports of “the continuing escalation in numbers of women inside, far beyond the initial 27. We’ve seen retaliation in the form of solitary confinement, two of the strikers transferred to Pearsall Detention Center, threats of deportation, and citations for not leaving their quarters to eat. ICE continues to deny the strike is happening. Loco!”

The rally will be held across from the baseball field to the side of the detention center (1001 Welch St, Taylor, Texas 76574) this Saturday at 2 p.m. Sofia explains that “this time was chosen because it’s when the women are let outside — the hunger strikers asked us to come then so they can see us and gain strength from our presence. Even if they’re brought inside quickly, we’ve been told from women that in past rallies they can still hear the loud, amplified music — let’s raise our voice so high they can hear us, too!” 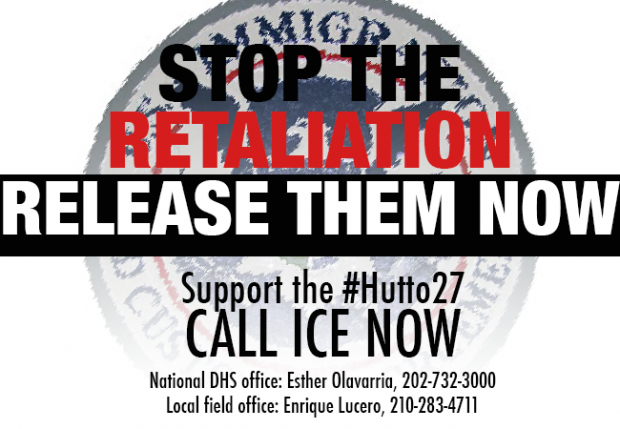 I was recently reminded that there may be readers who are unfamiliar with the complex mix of politics, racism, and greed that has brought us immigrant detention. Yet I worry that I have written so much about various aspects of the issue in the past year that some of the material may appear redundant. Am I laboring to explain that which I’ve already laid out? Finally I realized that I can’t assume that the earlier pieces have been read.

The School of the Americas Watch, with its insistence that we recognize and expose the complicity of the American Military in the training of the perpetrators of so much violence in the Northern Triangle, absolutely connects to the women on hunger strike in Hutto. It is precisely that violence which has driven them here.

But what of the violence that is the experience of the thousands of immigrants locked up in immigrant detention? Could it be that the monster personas I saw at Hutto were more than Halloween fun? Were these employees of one of the worst private prison corporations really showing us something about what it means to be a guard in a prison incarcerating the victims of violence?

It is the image of the Dark Angel walking around the Hutto detention prison that I can’t shake.