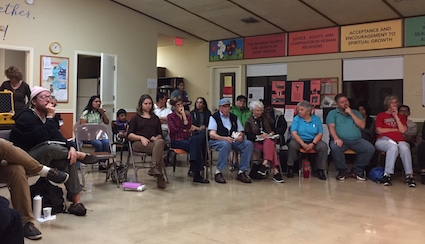 ICE out of Austin meeting. Photo by Elaine J. Cohen / The Rag Blog.

AUSTIN — ICE out of Austin, an immigrant-led activist group, and the Austin Sanctuary Network met together for the first time at Wildflower Unitarian Church on November 22, 2016. More than 50 people met in the building on Oltorf, just west of IH-35, which Faith Presbyterian shares with Wildflower.

The meeting was called to address the immediate concerns of Austin’s immigrant community in the wake of the recent election results. Various people from a range of community groups addressed the meeting on a variety of issues. One of the first myths exposed is the misconception that Austin is a sanctuary city. It is not.

The large turnout meant that there was not enough interpreting equipment, but consecutive interpretation maintained inclusive communication in this room of both Spanish only and English only speakers. This adjustment did nothing to dampen the enthusiasm of those in attendance.

Philadelphia activists have had success in preventing arrests with a tool which is called “Sanctuary in the Streets.” Training sessions to learn how to do this are on the horizon.

If you are part of a faith community that is interested in joining the Austin Sanctuary Network, please message them at their Facebook site, or contact Alejandro Casares at Grassroots Leadership. Some of the congregations and groups that are in the Sanctuary Network include the First Unitarian Universalist Church of Austin, St. Andrew’s Presbyterian, Trinity United Methodist Church, St. Hildegard’s, and Austin Jewish Voice for Peace.

The work of protecting the immigrants in Austin is going to need support from many. With the federal government threatening to withhold millions of dollars to cities that declare themselves to be sanctuary cities, new tactics and alliances are going to be needed. Please use the contacts above if you wish to hear of next meetings and training sessions.

If Austin cannot be a sanctuary city, then it must be a city of sanctuaries.

The Austin Sanctuary Network recently celebrated their successful solidarity efforts in preventing the deportation of Guatemalan refugees, Hilda and her son Ivan.  Read their story.