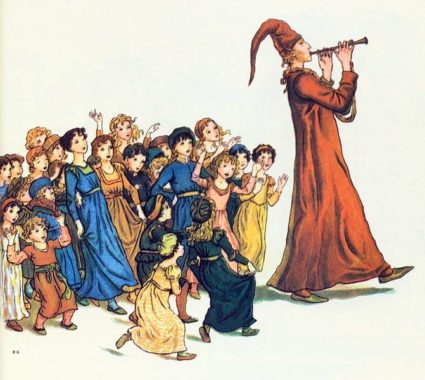 I can’t remember when I first heard of The Pied Piper of Hamelin; possibly after I began to read in earnest, around the age of 8. I may have found the story in a child’s version of The Brothers Grimm or seen the adaptation on T.V. in the 1950’s with Van Johnson.

My memory of the story faded over the subsequent years until I found myself confiding in a few trusted ears, “You know, I’ve begun to see Facebook as the Pied Piper of this epoch.” The look of surprise, incredulity and amusement that was evoked rarely elicited any questions from friends. The question of why this has become an annoying itch is what brings me to ask for the reader’s patience and curiosity while I sort through the threads of plague fear, greed, separation, and loss that are part of this story.

The Pied Piper of Hamelin appears in European literature between the 12th and 14th centuries. There is an actual city named Hamlin in modern Germany; rats and plague were feared throughout this period and there is some linguistic evidence that suggests that many young people from Hamlin emigrated to newly conquered regions to the east.

While the theme of forced migration and child separation is too familiar to our current experience, the part of the Pied Piper of Hamlin that brings me especially to Facebook are the elements of broken promises, greed, and population capture.

In light of the recent testimonies of Mark Zuckerberg and other Facebook co-conspirators (easily viewed on YouTube, Democracy Now!, or the archives of committee hearings of the U.S. Congress) more and more people are awakening to the unpleasant truth about the greed at the core of the collaboration of Facebook with various political groups. The past and future presidential campaigns of the current occupant come to mind.

Now, at various gatherings when I explain that I am Facebook Free, more and more people sigh and their eyes widen in recognition of the growing evidence of Facebook’s infiltration into our lives. That the Pied Piper lured children away from their parents remained in my memory, but it was not until I started research on the Pied Piper of Hamlin that I saw that the kidnapping of the children was actually in retaliation to the broken promise of the Mayor and “good people” of Hamlin.

The agreement was to rid the city of rats. The Pied Piper fulfilled his part of the arrangement: The rats were lead into the Weser River where they drowned and Hamlin was cleansed. The Mayor, however, decided to withhold payment. While the adults were in a special church service, the Pied Piper played his magic pipes and gathered all the children. The children were then spirited into a cave, behind the walls of a castle, into a mountain pass, or into the river, depending on which text you read.

The significance of the Mayor’s greed and the breaking of his word are obscured by the emphasis on the cruelty of taking away all the town’s children. Yet it is to broken promises and greed that link this Medieval European story to our current situation with Facebook. The fact that billions of dollars was made in the advertisements purchased and posted by the Trump campaign in 2016 must be seen as an inducement to replicate or exceed those strategies for 2020.

The progressive activists that I know who are on Facebook are not the targets of these propaganda dispatches. They are directed at the soft middle of Americans who struggle under the weight of low wages, poor health care and uncertainty about their future and that of their children.

They have disappeared into the Facebook cave, drawn by friendly photos and the illusion of contact, of community. It is this group that will now receive the onslaught of ads geared to make them either too depressed to vote or to vote for a face familiar to them through Reality TV. Data culled from millions of posts is a new currency, used to identify you and sell access to you.

Millions have disappeared behind the electronic walls of Facebook, enchanted by promises of community and connectedness. The rats hide behind masks of tech superiority and the imagined normalcy of being “on Facebook.” Posting on Facebook has become so easy that our real connections to our community are diminished.

There are other ways to communicate to the world that are far less lethal than Facebook. The blog where you are reading this is one example. Personal emails and poster art are two more. We need more Kiosks, in the European style, in public places, in front of cafes.

Become Facebook Free. Rediscover the people who are in your community.

[Rag Blog contributor Elaine Cohen moved to Austin in 1997 after she found Accion Zapatista’s website. She became involved with immigrants when she started work as a bilingual substitute for the Austin Independent School District (AISD). After another stay teaching in Mexico (2005-2010) she returned to Austin, discovered the Hutto Visitation Program, and became involved in visiting women and children in Texas’ family immigration detention centers.]

1 Response to Elaine J. Cohen :
The Pied Piper of Facebook