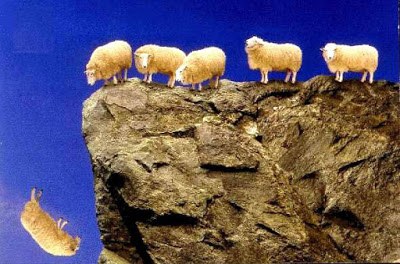 Taking the dive! Image from Photobucket.
The next step:
Forward over the fiscal cliff?

If John Boehner wants to give the car keys to the crazies, and they’re willing to drive over the cliff, then the rest of us should step back and begin to talk to our moderate Republican friends.

And he would have phased out social security and medicare, eliminated Obamacare (that has guaranteed medical coverage for all Americans), cut health and safety standards for workers, and driven down wages in the public and private sectors.

That didn’t happen. We’re not moving backwards. But there’s no guarantee that we’ll move forward unless the Democrats put some starch in their backbones and get ready for the fight of their lives. The battle for the future has not been won. That battle has just begun.

Democrats just added to their majority in the Senate. They now have 53 Democrats and two Independents who will probably vote with them against 45 Republicans. But one senator can filibuster a bill and stop it, and it takes 60 votes to override that filibuster.

There is nothing sacred about the filibuster. It is not part of the Constitution. It is a relatively modern invention meant to protect the state’s rights of southern racists.

The rules of the Senate are adopted on the first day of the session. The Democrats must adopt rules eliminating the filibuster, and they also must eliminate the rule that allows one senator to put a hold on a presidential appointment. If we are to move forward, then we have to smash through these barriers that Mitch McConnell and his Southern racist pals have set in our way.

The Democrats made some gains in the House but not enough to control it. There are still some races that are too close to call, but it seems the Republicans will have a 40-vote edge. In order to hold his caucus together, John Boehner has had to cater to the crazies.

But the Tea Party Caucus had only 61 members during the last session, and two of the worst of that lot were defeated: Roscoe Bartlett and Joe Walsh (another Republican expert on women’s health, who said abortion isn’t necessary to protect the life of the mother because women never die from childbirth any more. According to Amnesty International: “During 2004 and 2005, more than 68,000 women nearly died in childbirth in the USA. Each year, 1.7 million women suffer a complication that has an adverse effect on their health.”).

All the Democrats need is 21 Republicans to join with them in a Congress of National Reconciliation — a bi-partisan Congress that will put the good of the country ahead of partisan wrangling. Up to now, the threat against moderate Republicans has been, “If you don’t cooperate with the Tea Party, then we’ll run against you in the Primary and beat you.”

But what has happened when they’ve done that? What happened to Todd Aikin, Richard Mourdock, and Christine O’Donnell when those Tea Party darlings won their party’s primary? They went down to defeat when faced with Democratic moderates. If 21 moderate Republicans would caucus with the Democrats, then the Democrats must offer them the Speaker’s role and the chairs of all the committees.

And in order to get this country back on the road to prosperity we need to help the people at the bottom of the ladder of opportunity. If we raise the federal minimum wage, that will translate immediately into more goods purchased, more homes built, and more prosperity for everyone.

Right now we are looking over a financial cliff. What would happen if we went over that cliff? If Congress does nothing, then there would be automatic cuts in Defense that would close down unnecessary military bases in Southern states and foreign countries.

So, if John Boehner wants to give the car keys to the crazies, and they’re willing to drive over the cliff, then the rest of us should step back and begin to talk to our moderate Republican friends. This financial cliff could be a driveway where we could work together for a bi-partisan Congress of National Reconciliation.