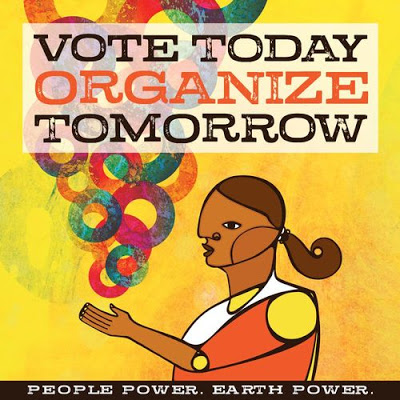 In the months ahead, progressive forces need to reexamine the history of social change in America, conceptualizing movement possibilities everywhere…

The commentaries on the 2012 presidential election are rolling in. Over the next several days and weeks progressives will be discussing the meaning of the 2012 elections for “Where do we go from here?” The desperate need is for us to resume rebuilding America and planting the seeds for a vision of  “21st century Socialism.”

So for now here is a list of some of the issues progressives and radicals should begin to discuss all across the nation.

First, MSNBC commentator Chuck Todd emphasized from the outset of election night commentary that the demographic changes in American society are and will continue to transform politics and the prospects for change.

By 2050, a National Journal report predicted “minorities” — that is Black and Brown people — will constitute a majority of the population of the country. In the presidential election just completed 24 percent of the voters were African Americans and Latinos. Also youth as a proportion of these populations is growing.

Finally, women are a segment of the voting age population that is growing and motivated in part by a rejection of political ideologies and theologies that prohibit their control of their own bodies.

Second, in addition to race and gender, the 2012 election results point out emphatically that class matters. There is no question that the labor movement, including public employees, and grassroots workers’ organizations revitalized after 2010 in the industrial heartland, was instrumental in facilitating a Democratic “ground game” in states like Ohio, Wisconsin, and even Indiana.

Working people are fired up, angry, and possibly ready to become a “class for itself.” And, in those states where labor made a difference, activists readily articulated connections between workers’ interests and interests of women and people of color.

Third, big money gives enormous advantage to the one percent as they select and promote candidates and issues. Big money also facilitates voter suppression and it pressures the mass media to give unwarranted attention to their claims about the society.

All the mainstream media, including the more liberal MSNBC, exaggerated the Romney debate bounce, claims about changing momentum, the closeness of the elections, claims derived from multiple and endless polls, and a hyped cognitive airspace about an alleged appeal that Romney/Ryan had.

While much of the election hype was driven by the competition for viewers, there is no doubt that the Koch brothers, the Bradley Foundation, and the millionaire super PACS were able to project their vision well beyond the proportion of those in the society who endorse it.

Even though the power of money should not be dismissed, this election shows, once again, the power of the people. The unsung heroes and heroines were the millions of people who stood for hours to vote in Florida, Ohio, Virginia, Wisconsin, California, New York, New Jersey, and all around the country, despite the best efforts of state governments and Tea Party groups to discourage voting.

It would be a great mistake in the future to demean voting, even voting for one of the two major parties. It remains the symbolic hallmark of real democracy. As articulate spokespersons, such as Nina Turner, Ohio State Senator, and Georgia Congressman John Lewis eloquently expressed it, people put their bodies and lives on the line to secure the right to vote. That must never be ignored.

What progressives need to work for is a society where that vote can be clearly cast for those who support the people’s interests.

Fourth, building a movement all around the country matters. In 2008, the Democratic Party crafted a 50-state strategy. Resources were channeled into campaigns in states and communities that heretofore had only small progressive movements.

But in 2008 that changed and in unlikely places such as Tippecanoe County in North Central Indiana, an overwhelmingly red county, Barack Obama carried the area and Indiana went blue. The same experience occurred elsewhere in states like North Carolina.

After 2008, such communities were written off because they were not communities in “swing states.”

Subsequent to 2008, activists in the industrial heartland, some of the western states, and the South were seen as beyond mobilization again. In some places, such as Central Indiana, Eastern North Carolina, and even Ohio and Wisconsin, those who had mobilized in 2008 remained so despite being written off by the Democratic National Committee (and many progressive groups).

The 50-state strategy had the potential for developing into a nationwide social movement. After 2008, the Democratic Party moved away from this approach and some of the Left returned to focusing on progressive politics on the coasts.

In the months ahead, progressive forces need to reexamine the history of social change in America, conceptualizing movement possibilities everywhere, while recognizing the particularities of history, culture, politics, and organizational potentials in different geographic locales.

Finally, progressives need to examine political outcomes in states and communities. Preliminary data indicate that while progressive constituencies rose up angry against reactionary candidates in various state and local races as well as national campaigns, the most right-wing sectors of the one percent control state governments in almost half of the 50 states (where Republicans control both legislative assemblies).

And it is these state governments since 2010 that have imposed right-to-work legislation, attacked collective bargaining for public employees, defunded Planned Parenthood, built private schools and voucher programs that will destroy public schools as we have known them, resolved to impose anti-science subject matter in school curricula, and have systematically ignored environmental hazards. The national government moved “blue” in 2012 while it remains blood “red” in many states.

Progressives need to address many, many more issues in the coming months: the “fiscal cliff,” military spending, drone warfare, climate change, and expanding the health care system for example. The key point is to begin to change now. As one wonderful graphic urged on Facebook election day, “Vote Today, Organize Tomorrow.”