It disgusts me that the politics of fear has become big business in the US. How can I be anything but deeply cynical about a power elite that ratchets up this fear-mongering for the election and a complacent population that dutifully cowers and dashes for cover at any hint of imaginary danger. When will we see through the sham and kick all these bastards out of our lives and, more particularly, out of the power structure of the nation? 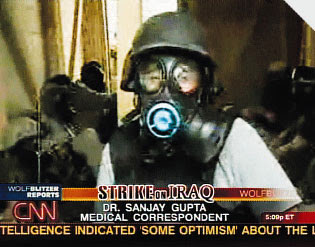 WASHINGTON – The United States remains “dangerously vulnerable” to chemical, biological and nuclear attacks seven years after 9/11, a forthcoming independent study concludes. And a House Democrats’ report says the Bush administration has missed one opportunity after another to improve the nation’s security.

Efforts to reduce access to nuclear technology and bomb-making materials have slowed, thousands of U.S. chemical plants remain unprotected, and the U.S. government continues to oppose strengthening an international treaty to prevent bioterrorism, according to the report produced by the bipartisan Partnership for a Secure America.

The group includes leaders of the disbanded 9/11 Commission, the bipartisan panel that investigated government missteps before the 2001 terror attacks on the United States.

“The threat of a new, major terrorist attack on the United States is still very real,” concludes the report to be released Wednesday, the same day a congressional commission will hold a hearing in New York on nuclear and biological terrorism threats.

“A nuclear, chemical or biological weapon in the hands of terrorists remains the single greatest threat to our nation. While progress has been made in securing these weapons and materials, we are still dangerously vulnerable,” the report said.
Congressional Democrats, meanwhile, had harsher criticism of the Bush administration’s efforts. Their report, written by the staffs of the House Homeland Security and Foreign Affairs committees, found little or no progress across the board on national security initiatives.

“The Bush administration has not delivered on a myriad of critical homeland and national security mandates,” the Democrats’ report states. That report was being released Tuesday.

“The administration has just failed to act in so many ways,” said Rep. Bennie Thompson, D-Miss. “Let’s say that we’ve been fortunate that we have not been attacked” since 2001, said Thompson, who chairs the House Homeland Security Committee.

The independent report focuses narrowly on weapons of mass destruction.

The report and supporting studies describe the failure of international cooperation to prevent terrorists from obtaining weapons of mass destruction, which they call a major problem. Many countries continue to ignore a United Nations mandate to prevent the spread of weapons; the ability of many countries to monitor potential bioterrorism is “essentially nonexistent,” and dangerous chemical weapons stockpiles remain in some countries, including Russia and Libya, the report said.

Russia has been a significant player in U.S. efforts to secure nuclear weapons and to eliminate inventories of chemical weapons in the former Soviet region. That cooperation could be jeopardized as the two countries face off over the Russian invasion of Georgia and concerns about a U.S. missile defense base in Poland, Hamilton said.

Bush on Monday Bush on canceled a civilian nuclear cooperation deal with Russia.

“The things we do to penalize Russia will make it more difficult for us to deal with Russia on other matters,” Hamilton said.

State Department spokesman Robert Wood said he hasn’t seen the report. But he said there have been a number of successes in recent years, including negotiations to dismantle North Korea’s nuclear program and Libya’s agreement to end its nuclear and chemical weapons program.

“We have been engaged multilaterally with a number of countries to deal with this issue of weapons of mass destruction,” Wood said.

Wood said he also has not seen the Democrats’ report. “I fundamentally reject the charge that the administration has made the world less safe from terrorism,” he said.

House Democrats also blasted Bush policy in Pakistan, Afghanistan and Saudi Arabia as damaging to national security. U.S. efforts to combat terrorists in Pakistan have suffered because of “unyielding support for a military dictator”; Iraq has drained resources from the fight in Afghanistan, and Saudi Arabia continues to serve “as a major source of terrorist activity,” the Democrats’ report states.

This entry was posted in RagBlog and tagged Electoral politics, Police State. Bookmark the permalink.

2 Responses to Election Nearing : Ratchet Up the Fear Factor