Elections: This Is the Only World We’ve Got, Folks 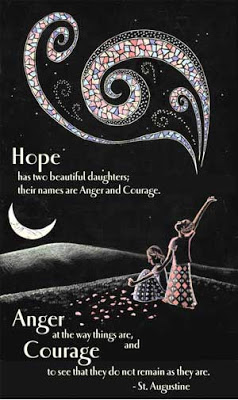 We Have a Chance to Choose a Better Road
By Caroline Arnold / August 24, 2008

Hope has two beautiful daughters. Their names are Anger and Courage; anger at the way things are, and courage to see that they do not remain the way they are. – Augustine of Hippo (354-430 AD)

Annie Glenn liked to tell the (probably apocryphal) story about a hand-lettered sign posted on a muddy, rutted road in rural Muskingum County, Ohio: “Choose your rut carefully – you’ll be in it for the next ten miles.”

With the conventions now upon us, we must hope that delegates and voters alike heed that homespun Ohio advice: Choose a rut carefully. We will all be in it for at least the next four years.

Despite the efforts of the neocons and much of the media over the last quarter-century to make fear the organizing principle of our society, most Americans today are more angry than fearful at the way things are, deeply dissatisfied with the rut we’ve been in for the last seven years and hoping, yearning for a road leading to a better world.

The 2006 election showed that we were angry about the rut our country was in. It also revealed that our courage – or the courage of our Congress – was not equal to the task of pulling out of the rut we were in and getting on firmer ground.

This week Speaker Pelosi said that in light of public anger over gasoline prices and public opinion that offshore drilling will bring those prices down, she will put the issue back on the table. As she should: this is a democracy, and if people are angry about something, elected officials should address it.

But by the same reasoning, Pelosi was dead wrong to keep impeachment off the table for two years. People were and are angry over the lying, cheating and criminal actions of the President and Vice President and have been clamoring for impeachment. How many people (in both cases) may be open to question, but the best way to find out is to put the issue on the table and see how many people pick up their forks.

Democracy is supposed to be a road on which people make the public decisions, policies and laws that affect their lives and communities and pave the way for a better future. It doesn’t guarantee scientifically-sound policies, logical, rational or moral decisions, fair or equitable laws, or even “liberty and justice for all.” It can only offer the people who travel the road and take the consequences of public decisions and policies the means to keep maintaining the infrastructure and improving the road as needed.

But what happens when elections are corrupted by money, when wealth can fund political campaigns and buy not just advertising but whole media empires, when voting machines can be corrupted, and voters intimidated or falsely disqualified, and when a questionably elected President can put the whole nation in a rut of secrecy, torture and perpetual war?

We have plenty to be angry about, but do we have the courage to change things? Do we even have the courage to set priorities among the things we will invest in or take risks for? What comes first, our own children, parents, siblings, friends? Our own homes, cars, private property, pets? Our personal education and health care? Education and health care for all? Gas for $3/gallon? Hungry, homeless people in our communities? Hungry, homeless people in Palestine or Afghanistan? Undocumented immigrants here? Refugees from genocide in Africa? Endangered species planet-wide?

The ethanol in the our cars’ gas tanks takes food from poor children; the exhaust from our lawn-mowers strands polar bears in the Arctic; our tax dollars pay for the cluster bombs that maim Lebanese children and the bulldozers that raze the houses of Palestinians. Our racism sends one in 20 black men to prison, serving longer terms than whites or Hispanics for the same crimes. Our hatred of “illegal immigrants” has stranded 43 women and 150 children in Postville, Iowa, destitute and under virtual house-arrest, and our fear of illegal drugs killed the dogs of a small town mayor when a local SWAT team without a proper warrant burst into his house on the mistaken assumption that his wife was dealing marijuana.

This is the only world we’ve got, folks. What we Americans do, how we spend our time, our money and the world’s natural resources, how we use our technical prowess, our human creativity and our human capacity for fairness, compassion and helping one another, and most of all, who we elect and what ruts in the road we choose in this election will affect, for better or worse, every living creature and living system on earth, down to the last generation to the end of time.

Though the mud-machines are already operating and it’s going to be very hard even to see where the ruts are, we have the chance to choose a better road. Barring new ways to tamper with votes or voters, some event that can be billed as a terrorist attack, or a few election-day power outages on the East or West Coasts, this election will tell us which ruts we are angry about and which ruts we have the courage to change or get out of.

[Before joining Senator John Glenn’s Washington staff in 1985, Caroline Arnold (csarnold@neo.rr.com) founded a successful small business and served three terms on the Kent (OH) Board of Education. In retirement she is active with civic and environmental organizations in Kent.]

This entry was posted in RagBlog and tagged American Society, Politics, Presidential Campaign. Bookmark the permalink.