Ellen LaConte : When Too Big to Fail is Too Big Not To 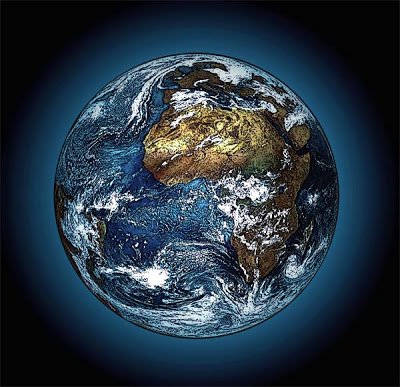 “Blick auf den Planeten Erde” by Heikenwaelder Hugo, Austria / Wikimedia Commons.
When too big to fail
is too big not to

Where bailout theory comes a cropper, no matter who’s doing or who’s receiving the bailout, is when it ignores the inevitability of finiteness on a finite planet.

The Occupy Wall Street (OWS) protesters here and around the world and most of the now iconic 99% of humans have something in common with the forces and powers they’re protesting.

Like the powers that be on Wall Street, in Washington, and in the rest of the nation’s and the world’s capitols and financial centers, they believe in the global economy’s ability to deliver them the goods — the resources, jobs, wages, and services they deserve and depend on — if only the people managing it were more fair.

As I write this the occupy moment in the U.S. is weakening and, its having neither chosen a single demand or coherent cluster of them nor posed any coherent solution to present inequities and trespasses, seems likely not to become a coherent movement. This leaves OWS in much the same position as the political and economic forces against which it is arrayed: incoherent.

Inarguably, the global economy could be managed in a way that would come closer to creating the flat world, level playing field, and economic equity envisioned by analysts like Tom Friedman and Paul Krugman. But even if it were, we would still be dealing with an economy that’s approaching a terminal condition capable of bringing to an end life as we know it. It’s this terminal condition we need to be protesting, or better still, trying mightily to mitigate or avoid.

Global economic theory tends to rely on one particularly counterintuitive notion: that huge transnational corporations, organizations, and economic systems are not vulnerable to the defects inherent in all forms of gigantism and overreach. Rather they are and should be treated as if they were “too big to fail” — or at least too big to be allowed to.

Letting them go under would, exactly as we’ve seen, put at risk the national and regional economies, investors, stockholders, suppliers, and other businesses and organizations, and even sovereign nations, they would weaken or take down with them. Some other economy, corporation, organization, country, or consortium of them will — even must — as a matter of course, bail out vulnerable mega-companies and institutions and nations. They must not be allowed to fail.

And so stock markets, investors, and even individuals who are not vested in the financial sector or directly in the global economy but who do depend on its ability to keep funding the systems they rely on for their lives and livelihoods keep counting on the powers and the world’s leaders to make sure the system doesn’t fail. And they assume, or at least try very hard to believe, they can actually do that.

Bailout Theory, as it is called, is fatally flawed, however, when it comes to a globalized, fossil-fueled, industrial, and hyper-capitalized economy. The kind of economy we are all now living “under.” The very economy that both fat cats and fist-shakers stake their futures on.

“Because Mother Nature does not do bailouts,” says former Vice President and climate change spokesperson Al Gore. Just as there’s no other Earth to turn to if we live for too long beyond this one’s means, there’s no larger economy to turn to if the global economy operates much longer beyond its means. And there are no unaffected national or regional economies that are sufficiently big, rich, or independent to bail the global economy out. 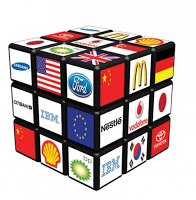 As we’ve seen in Europe, the global economy’s wealthiest, most powerful and aggressive subsidiary economies are heavily invested and implicated in each other’s bad paper, foreclosures, bankruptcies, and other forms of debt. Witness Germany’s virtual ownership of Greece and Britain, and European banks teetering on the edge of insolvency due to bad loans made to the overdrawn PIIGS (Portugal, Ireland, Italy, Greece and Spain) and in development, infrastructure, energy, military and expansion projects that are so big that no subsidiary economy can afford to undertake them alone.

The global economy’s poorest subsidiary economies already hang on by a thread that the richest, finding themselves ever less rich, may choose or have no choice but to cut. National economies are propping up each other’s credit and financial institutions in such a way that each of them is vulnerable to the failure of any of the others.

In spring 2008, in an earlier draft of my book Life Rules, I predicted that only one opportunistic condition would be required to bring down this jerry-rigged, multinational system of props: protracted widespread drought, cumulative weather-related disasters coupled with bankrupt emergency management systems, failed grain crops, another major resource war, recognition of and panic around peak oil, a rapid or prolonged sequence of serious seismic events, or meltdown of the U.S. or European Union economies, for example. Here we are.

But surely economic collapse isn’t inevitable, is it? After all, we pulled out of the Great Depression of the 1930s. That was a worldwide phenomenon too and the decades following the crash brought the most prosperity to the most people in human history.

In the process they created a conceptual divide that gave putative First World nations a dangerous sense of superiority and entitlement and global aspirations that carried stock markets around the world to such heights that at century’s end one investment analyst predicted the DOW Jones Industrial Average, which had yet to exceed 14,000 points, could hit 36,000.

Couldn’t upgraded versions of the same sorts of activities and policies that bailed us out then (Keynesian policies, for example, that we still like to believe will work now) actually bail us out now too?

Why not? Several once-in-an-Earthtime conditions permitted the boom that followed that early 20th century bust. Among them were:

None of these can save us now. Perpetual warfare bankrupts and corrupts rather than bankrolling nations and threatens unprecedented death and destruction. Earth’s cornucopia of resources and fossil fuels is approaching empty and will not be refilled. Ecosystem services like carbon sequestration, soil maintenance, flood control, pH balance, and water purification have been seriously taxed by global economic activity over the past half century.

The climate has already become noticeably unstable and increasingly unfriendly and CO2 in the atmosphere (not to mention other greenhouse gases) is almost 50 parts per million higher than life as we’ve known it can tolerate. The removal of any tie between the amount and value of monies in circulation and a finite material like gold has allowed — caused — the increasing funniness and decreasing actual value of money and created a false sense of limitlessness.

And the capacity of governments to manage at the global or even national level the complex symptoms that characterize our present critical mass of environmental, economic, social, and political crises appears to be nil.

“Thus it is that we can say,” writes American sociologist Immanuel Wallerstein in a paper titled “Globalization or the Age of Transition,” “that the capitalist world-economy has now entered its terminal crisis, a crisis that may last up to 50 years. . . As the world-economy enters into a new period of [attempted] expansion it will exacerbate the very conditions which have led it to this terminal crisis.”

“Collapse, if and when it comes again, will this time be global,” wrote anthropologist and historian Joseph Tainter in The Collapse of Complex Societies as long ago as 1988. “No longer can any individual nation collapse. World civilization will disintegrate as a whole.” He no longer includes the hedge “if and when it comes again” in his prediction.

In short, the booming, credit-driven economy that those once-in-an-Earthtime conditions permitted is the biggest economy there is and ever has been. There’s no bigger human economy for it to turn to for help. It’s too big not to fail.

If this is true, then future moment-cum-movements may wish, will likely need, to focus on post-global economics rather than tweaking of the present system which is both moribund and a danger to living things, including most humans.

[A freelance journalist, contemporary issues writer, and memoirist, Ellen LaConte is author most recently of a controversial, widely-endorsed meta-synthesis, Life Rules: Why so much is going wrong everywhere at once and how Life teaches us to fix it. Information about Ellen and her work can be found at www.ellenlaconte.com. Read more articles by Ellen LaConte on The Rag Blog.]