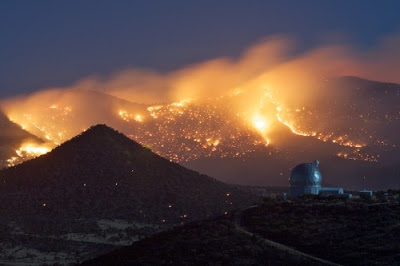 MARFA, Texas — Deep in far west Texas, about 60 miles north of the Rio Grande, lies a city called Marfa. While the population might be sparse (about one person per square mile), the cattle are plentiful and tourists are known to especially appreciate the city’s unique art scene — as well as the wide open spaces, of course.

On Saturday, April 9, a brush fire sparked and quickly spread across the ranch lands, eventually blazing through more than 182,000 acres, destroying homes, killing cattle, leaving many without power but, remarkably (even for this rural space), not taking any human life.

In the thick of it all, was KRTS, the only local radio broadcaster in its listening area. Their story is just one example of the value of public radio stations, and the importance of federal funding in their operations.

Like any good news organization staff serving the community they live in, KRTS’ three-member team set out to cover the Rock House Fire. General Manager Tom Michael, Programming and Production Manager Rachel Osier Lindley and Office Manager Anne Adkins stood on the front line of the fire on that first day. They were actually on the scene from the start, covering the fire as it spread and developed into a major wildfire.

With lives at stake the small crew went to work broadcasting critical emergency alerts and information to their community.

Over the next several days these three were joined by volunteers and the station’s former high school student intern, Daniel Hernandez, who all simply showed up at the station to help KRTS bring the community news of the evacuations, the path of the fire, and road closures and openings. Listeners would call the station to give first-hand reporting and updates on road closures, often before the Texas Department of Transportation could confirm.

When the station, like many residents, lost power late on Saturday night, Michael knew he couldn’t stand for the estimated five days the local electricity provider expected it would take to get back to full service.

Just three weeks ago KRTS was awarded a Public Telecommunications Facilities Program (PTFP) grant from the National Telecommunications and Information Administration to purchase a backup power generator. They were in the process of purchasing the generator when the station went off the air.

“Unacceptable,” Michael said of the time KRTS would be off-air, given its critical role in sharing the public emergency information and updates.

So, in short order he wrestled the complicated logistics necessary to get back on air. An engineer from NPR Member station KUT in Austin was tapped to bring the station back on the grid. 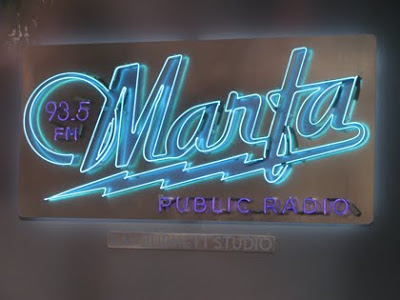 Marfa Public Radio, Marfa, Texas.
Michael then accomplished a few more Herculean tasks in a matter of hours: 1) finding a donor to cover the cost of the engineer’s flight, 2) getting special permission from the FAA for the engineer’s plane to land at the closest airfield which was under a temporary flight restriction, 3) arranging a 4×4 vehicle ride up the mountain, and 4) negotiating with the area’s wireless provider, whose tower was adjacent to KRTS’s tower, to tap into their backup generator.

Fortunately, the power came back on just as they got to the tower. The KUT engineer checked the connection and the station was back on the air. Just 24 hours later.

That’s not to say KRTS wasn’t reporting during the time of dead air. Through the station’s website, Facebook page, and Twitter feed they covered the wildfire’s status, every critical community evacuation, and road closures and openings.

As the wildfire’s containment increased and the immediate threat lessened, the station added reports on Red Cross services for those who had homes destroyed as well as details on local drives being set up to donate household items and food. During that first day alone Michael contacted the station’s streaming provider three separate times to double their capacity so they could accommodate the growing volume of online listeners.

Michael isn’t hesitant to share his projection about what would happen if federal grants were eliminated. The station relies on grants like the PTFP and the Corporation for Public Broadcasting’s Community Service Grants, which make up 30-50% of KRTS’s annual budget.

“We would go away if that money was lost,” Michael said.

The station’s operations are lean; without an engineer, music library, or a dedicated news staff, Michael doesn’t have to worry about many expenses beyond utilities and paying for the NPR programming that contribute to the station’s schedule.

With a tight margin between expenses and revenue and the looming threat of cuts to federal grant money, Michael is working hard to protect his station from going permanently dark. The station’s 600 members and total potential audience of 12,000– consisting largely of ranchers, border control agents, tourists, art gallery owners, and residents — relies on KRTS, he says.

“People are listening, especially in times of crisis. I feel terrible about the one day we were off the air during the wildfire, but fortunately during the evacuations we were able to get people to safety.” said Michael.

Michael thanks the first responders and the community that came together to fight this fire. And although he would probably never admit it himself, especially when it comes to the Rock House Fire, KRTS could certainly be considered among those first responders who helped residents stay informed and safe.

Whether bringing listeners the important details of a wildfire deep in west Texas or providing NPR’s coverage of a firefight on the streets of Kabul, KRTS is keeping the residents of Marfa informed every day.

Read the Fort Worth Star-Telegram‘s thoughts on Marfa Public Radio’s efforts during the fire here, and find out more about the station online at www.marfapublicradio.org.

[This article was published by National Public Radio and was distributed by Free Press‘ Media Reform Daily.]