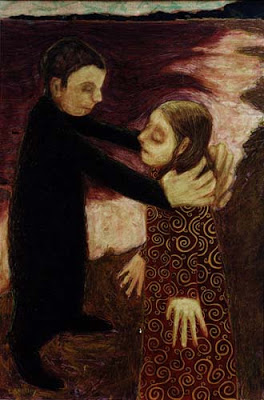 The human ability to empathize with other humans, to place oneself in the shoes of another, is a skill that is greatly diminished in modern society.Image from Demand More.
‘Empathic Civilization’: When both faith and reason fail, stepping up to the Age of Empathy

Empathy represents the deepest expression of awe, and understandably is regarded as the most spiritual of human qualities.

While our radio talk shows and 24-hour cable TV news programs incessantly play off the political rift between conservative and liberal ideologies, the deeper conflict in America has always been the cultural divide between faith versus reason.

At the dawn of the modern market economy and nation-state era, the philosophers of the Enlightenment challenged the Age of Faith that governed over the feudal economy with the Age of Reason. Theologians and philosophers have continued to battle over faith vs. reason ever since, their debates often spilling over into the cultural and political arenas, with profound consequences for society.

Today, however, at the outset of a global economy and the biosphere era, a new generation of scientists, scholars, and social reformers is beginning to challenge some of the underlying assumptions of both the Age of Faith and the Age of Reason, taking us into the Age of Empathy.

The empathic advocates argue that, for the most part, both earlier narratives about human nature fail to plumb the depths of what makes us human and therefore leave us with cosmologies that are incomplete stories — that is, they fail to touch the deepest realities of existence. That’s not to dismiss the critical elements that make the stories of faith and reason so compelling. It’s only that something essential is missing — and that something is “embodied experience.”

Both the Abrahamic faiths — Judaism, Christianity, and Islam — as well as the Eastern religions of Buddhism, Hinduism, and Taoism, either disparage bodily existence or deny its importance. So too does modern science and most of the rational philosophers of the Enlightenment.

For the former, especially the Abrahamic faiths, the body is fallen and a source of evil. Its presence is a constant reminder of the depravity and mortality of human nature. For the latter, the body is mere scaffolding to maintain the mind, a necessary inconvenience to provide sensory perception, nutrients, and mobility. It is a machine the mind uses to impress its will on the world. It is even loathed because of its transient nature. The body is a constant reminder of death, and therefore, feared, disparaged and dismissed in the world’s great religions and among many of the Enlightenment philosophers.

Most of all, the body is to be mistrusted, especially the emotions that flow from its continuous engagement with and reaction to the outside world. Neither the Bible nor the Enlightenment ruminations make much room for human emotions, except to depreciate them as untrustworthy and an impediment either to obedience to God in the first instance or to the rational will in the second instance.

In the modern era, with its emphasis on rationality, objectivity, detachment, and calculability, human emotions are considered irrational, quixotic, impossible to objectify, not subject to detached evaluation, and difficult to quantify. Even today, it is common lore not to let one’s emotions get in the way of sound reasoning and judgment. How many times have we heard someone say, or have we said to someone else, “Try not to be so emotional… try to behave more rationally.”

The clear message is that emotions are of a lesser ilk than reason. They are too carnal and close to our animal passions to be considered worthy of being taken seriously — and worse still, they pollute the reasoning process.

The Enlightenment philosophers — with a few notable exceptions — eliminated the very mortality of being. To be alive is to be physical, finite, and mortal. It is to be aware of the vulnerability of life and the inevitability of death. Being alive requires a continuous struggle to be and comes with pain, suffering, and anguish, as well as moments of joy. How does one celebrate life or mourn the passing of a relative or friend or enter into an intimate relationship with another in a world devoid of feelings and emotions?

New developments in evolutionary biology, cognitive science, and psychology are laying the groundwork for a wholesale reappraisal of human consciousness. The premodern notion that faith and God’s grace are the windows to reality and the Enlightenment idea that reason is at the apex of modern consciousness are giving way to a more sophisticated approach to a theory of mind.

Researchers in a diverse range of fields and disciplines are beginning to reprioritize some of the critical features of faith and reason within the context of a broader empathic consciousness. They argue that all of human activity is embodied experience — that is, participation with the other — and that the ability to read and respond to another person “as if” he or she were oneself is the key to how human beings engage the world, create individual identity, develop language, learn to reason, become social, establish cultural narratives, and define reality and existence.

If empathic consciousness flows from embodied experience and is a celebration of life — our own and that of other beings — how do we square it with faith and reason, which are disembodied ways of looking at reality and steeped in the fear of death?

When we deconstruct the notion of faith, we find that at the core are three essential pillars: awe, trust, and transcendence. The religious impulse begins with the sense of awe, the feeling of the wonder of existence, both the mystery and majesty. Awe is the deepest celebration of life. We marvel at the overwhelming nature of existence, and sense that by our own aliveness, we somehow fit into the wonder we behold.

Although faith is set in motion by a feeling of awe and requires a belief that one’s life has meaning in a larger, universal sense of things, it can be purloined and made into a social construct that exacts obedience, feeds on fear of death, is disembodied in its approach, and establishes rigid boundaries separating the saved from the damned. Many institutionalized religions do just that.

But faith also requires trust — the willingness to surrender ourselves to the mystery of existence at both the cosmic level and at the level of everyday life with our fellow beings. Trust becomes indispensable to allowing empathy to grow, and empathy, in turn, allows us to plumb the divine presence that exists in all things. Empathy becomes the window to the divine. It is by empathic extension that we transcend ourselves and begin connecting with the mystery of existence.

In the empathic civilization, spirituality invariably replaces religiosity. Spirituality is a deeply personal journey of discovery in which empathic experience — as a general rule — becomes the guide to making connections, and becomes the means to foster transcendence. The World Values Survey and countless other polls show a generational shift in attitudes toward the divine, with the younger generation in the industrialized nations increasingly turning away from institutionalized religiosity and toward personal spiritual quests that are empathic in nature.

Reason too can be salvaged from its disembodied Enlightenment roots and be recast within an embodied empathic frame. While reason is most often thought of in terms of rationalization, that is, abstracting and classifying phenomena, usually with the help of quantifiable tools of measurement, it is more than that. Reason includes mindfulness, reflection, introspection, contemplation, musing, and pondering, as well as rhetorical and literary ways of thinking. Reason is all of this and more. When we think of reason, we generally think of stepping back from the immediacy of an experience and probing our memories to see if there might be an analogous experience that could help us make the appropriate judgment or decisions about how best to respond.

The critical question is where does reason come from? The Cartesian and Kantian idea that reason exists independently of experience as an a priori phenomenon to be accessed does not conform to the way we reason in the real world. Reason is a way of organizing experience and relies on many mental tools. The point, however, is that reason is never disembodied from experience but rather a means of understanding and managing it.

Experience, as we learned earlier, begins with sensations and feelings that flow from engagement with others. While one’s sensations and feelings make possible the initial connection with the other, they are quickly filtered by way of past memories and organized by the various powers of reason at our disposal to establish an appropriate emotional, cognitive, and behavioral response. The entire process is what makes up empathetic consciousness. Empathy is both an affective and cognitive experience.

If empathy did not exist, we could not understand why we feel the way we do, or conceptualize something called an emotion or think rationally. Many scholars have mistakenly associated empathy with just feelings and emotions. If that were all it was, empathic consciousness would be an impossibility.

Reason, then, is the process by which we order the world of feelings in order to create what psychologists call pro-social behavior and sociologists call social intelligence. Empathy is the substance of the process. Reason becomes increasingly sophisticated as societies become more complex, human differentiation more pronounced, and human exchange more diverse. Greater exposure to others increases the volume of feelings that need to be organized. Reason becomes more adept at abstracting and managing the flood of embodied feelings. That’s not to say that reason can’t also be used to exploit others, for example, to advance narcissistic ends or create terror among people.

By reimagining faith and reason as intimate aspects of empathic consciousness, we create a new historical synthesis–the Age of Empathy–that incorporates many of the most powerful and compelling features of the Age of Faith and the Age of Reason, while leaving behind the disembodied story lines that shake the celebration out of life.

[Jeremy Rifkin is the author of The Empathic Civilization: The Race to Global Consciousness in a World in Crisis.]

This entry was posted in RagBlog and tagged Existential Angst, Philosophy. Bookmark the permalink.