Endlessly Banging Our Heads Against History 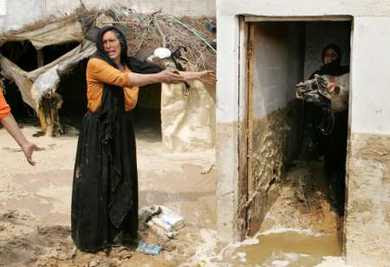 Raw sewage in the Gaza
Israel is suppressing a secret it must face
By Johann Hari / April 28, 2008

How did a Jewish state founded 60 years ago end up throwing filth at cowering Palestinians?

When you hit your 60th birthday, most of you will guzzle down your hormone replacement therapy with a glass of champagne and wonder if you have become everything you dreamed of in your youth. In a few weeks, the state of Israel is going to have that hangover.

She will look in the mirror and think – I have a sore back, rickety knees and a gun at my waist, but I’m still standing. Yet somewhere, she will know she is suppressing an old secret she has to face. I would love to be able to crash the birthday party with words of reassurance. Israel has given us great novelists like Amos Oz and A.B. Yehoshua, great film-makers like Joseph Cedar, great scientific research into Alzheimer’s, and great dissident journalists like Amira Hass, Tom Segev and Gideon Levy to expose her own crimes.

She has provided the one lonely spot in the Middle East where gay people are not hounded and hanged, and where women can approach equality.

But I can’t do it. Whenever I try to mouth these words, a remembered smell fills my nostrils. It is the smell of shit. Across the occupied West Bank, raw untreated sewage is pumped every day out of the Jewish settlements, along large metal pipes, straight onto Palestinian land. From there, it can enter the groundwater and the reservoirs, and become a poison.

Standing near one of these long, stinking brown-and-yellow rivers of waste recently, the local chief medical officer, Dr Bassam Said Nadi, explained to me: “Recently there were very heavy rains, and the shit started to flow into the reservoir that provides water for this whole area. I knew that if we didn’t act, people would die. We had to alert everyone not to drink the water for over a week, and distribute bottles. We were lucky it was spotted. Next time…” He shook his head in fear. This is no freak: a 2004 report by Friends of the Earth found that only six per cent of Israeli settlements adequately treat their sewage.

Meanwhile, in order to punish the population of Gaza for voting “the wrong way”, the Israeli army are not allowing past the checkpoints any replacements for the pipes and cement needed to keep the sewage system working. The result? Vast stagnant pools of waste are being held within fragile dykes across the strip, and rotting. Last March, one of them burst, drowning a nine-month-old baby and his elderly grandmother in a tsunami of human waste. The Centre on Housing Rights warns that one heavy rainfall could send 1.5m cubic metres of faeces flowing all over Gaza, causing “a humanitarian and environmental disaster of epic proportions”.

So how did it come to this? How did a Jewish state founded 60 years ago with a promise to be “a light unto the nations” end up flinging its filth at a cowering Palestinian population?

Read the rest of it here. / The Independent

This entry was posted in RagBlog and tagged Israel, Official Repression, Palestine. Bookmark the permalink.