Engelhardt and McKibben : Last Chance to Save the Earth 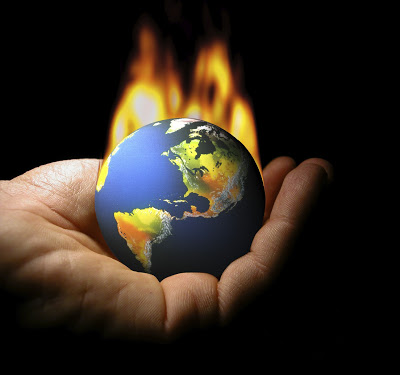 The Defining Moment for Climate Change
By Tom Engelhardt

Already climate change — in the form of a changing pattern of global rainfall — seems to be affecting the planet in significant ways. Take the massive, almost decade-long drought in Australia’s wheat-growing heartland, which has been a significant factor in sending flour prices, and so bread prices, soaring globally, leading to desperation and food riots across the planet.

A report from the Bureau of Meteorology in Australia makes clear that, despite recent heavy rains in the eastern Australian breadbasket, years of above normal rainfall would be needed “to remove the very long-term [water] deficits” in the region. The report then adds this ominous note: “The combination of record heat and widespread drought during the past five to 10 years over large parts of southern and eastern Australia is without historical precedent and is, at least partly, a result of climate change.”

Now, it’s true that the industrial revolution, which led to the release of greenhouse gases into the atmosphere at historically unprecedented rates, was also, in a sense, “without historical precedent”; but most natural events — unlike, say, the present staggering ice melt in the Arctic — have been precedented (if I can manufacture such a word). They have been part of the historical record. That era — the era of history — is now, however, threatening to give way to a period capable of outrunning history itself, of outrunning us.

The planet in its long existence may have experienced the extremes to come, but we haven’t. The planet, unlike much life on it, may not — given millions or tens of millions of years to recover — be in danger, but we are.

When you really think about it, history is humanity. It’s common enough to talk about some historical figure or failed experiment being swept into the “dustbin of history,” but what if all history and that dustbin, too, go… well, where? What are we, really, without our records? Once we pass beyond them, beyond all the experience we’ve collected, written down, and archived since those first scratches went on clay tablets in the lands of the Tigris and Euphrates — now being stripped of their cultural patrimony — at least two unanswerable questions arise. Once history has been left in the dust, where are we? — and, who are we?

Let the indefatigable environmentalist Bill McKibben, who has a powerful urge to stop us just short of the cliff of the post-historical era, take it from here. Tom

The World at 350:
A Last Chance for Civilization
By Bill McKibben

Even for Americans, constitutionally convinced that there will always be a second act, and a third, and a do-over after that, and, if necessary, a little public repentance and forgiveness and a Brand New Start — even for us, the world looks a little Terminal right now.

It’s not just the economy. We’ve gone through swoons before. It’s that gas at $4 a gallon means we’re running out, at least of the cheap stuff that built our sprawling society. It’s that when we try to turn corn into gas, it sends the price of a loaf of bread shooting upwards and starts food riots on three continents. It’s that everything is so inextricably tied together. It’s that, all of a sudden, those grim Club of Rome types who, way back in the 1970s, went on and on about the “limits to growth” suddenly seem… how best to put it, right.

All of a sudden it isn’t morning in America, it’s dusk on planet Earth.

There’s a number — a new number — that makes this point most powerfully. It may now be the most important number on Earth: 350. As in parts per million (ppm) of carbon dioxide in the atmosphere.

A few weeks ago, our foremost climatologist, NASA’s Jim Hansen, submitted a paper to Science magazine with several co-authors. The abstract attached to it argued — and I have never read stronger language in a scientific paper — “if humanity wishes to preserve a planet similar to that on which civilization developed and to which life on earth is adapted, paleoclimate evidence and ongoing climate change suggest that CO2 will need to be reduced from its current 385 ppm to at most 350 ppm.” Hansen cites six irreversible tipping points — massive sea level rise and huge changes in rainfall patterns, among them — that we’ll pass if we don’t get back down to 350 soon; and the first of them, judging by last summer’s insane melt of Arctic ice, may already be behind us.

So it’s a tough diagnosis. It’s like the doctor telling you that your cholesterol is way too high and, if you don’t bring it down right away, you’re going to have a stroke. So you take the pill, you swear off the cheese, and, if you’re lucky, you get back into the safety zone before the coronary. It’s like watching the tachometer edge into the red zone and knowing that you need to take your foot off the gas before you hear that clunk up front.

In this case, though, it’s worse than that because we’re not taking the pill and we are stomping on the gas — hard. Instead of slowing down, we’re pouring on the coal, quite literally. Two weeks ago came the news that atmospheric carbon dioxide had jumped 2.4 parts per million last year — two decades ago, it was going up barely half that fast.

And suddenly, the news arrives that the amount of methane, another potent greenhouse gas, accumulating in the atmosphere, has unexpectedly begun to soar as well. Apparently, we’ve managed to warm the far north enough to start melting huge patches of permafrost and massive quantities of methane trapped beneath it have begun to bubble forth.

And don’t forget: China is building more power plants; India is pioneering the $2,500 car, and Americans are converting to TVs the size of windshields which suck juice ever faster.

Here’s the thing. Hansen didn’t just say that, if we didn’t act, there was trouble coming; or, if we didn’t yet know what was best for us, we’d certainly be better off below 350 ppm of carbon dioxide in the atmosphere. His phrase was: “…if we wish to preserve a planet similar to that on which civilization developed.” A planet with billions of people living near those oh-so-floodable coastlines. A planet with ever more vulnerable forests. (A beetle, encouraged by warmer temperatures, has already managed to kill 10 times more trees than in any previous infestation across the northern reaches of Canada this year. This means far more carbon heading for the atmosphere and apparently dooms Canada’s efforts to comply with the Kyoto Protocol, already in doubt because of its decision to start producing oil for the U.S. from Alberta’s tar sands.)

We’re the ones who kicked the warming off; now, the planet is starting to take over the job. Melt all that Arctic ice, for instance, and suddenly the nice white shield that reflected 80% of incoming solar radiation back into space has turned to blue water that absorbs 80% of the sun’s heat. Such feedbacks are beyond history, though not in the sense that Francis Fukuyama had in mind.

And we have, at best, a few years to short-circuit them — to reverse course. Here’s the Indian scientist and economist Rajendra Pachauri, who accepted the Nobel Prize on behalf of the Intergovernmental Panel on Climate Change last year (and, by the way, got his job when the Bush administration, at the behest of Exxon Mobil, forced out his predecessor): “If there’s no action before 2012, that’s too late. What we do in the next two to three years will determine our future. This is the defining moment.”

In the next two or three years, the nations of the world are supposed to be negotiating a successor treaty to the Kyoto Accord. When December 2009 rolls around, heads of state are supposed to converge on Copenhagen to sign a treaty — a treaty that would go into effect at the last plausible moment to heed the most basic and crucial of limits on atmospheric CO2.

If we did everything right, says Hansen, we could see carbon emissions start to fall fairly rapidly and the oceans begin to pull some of that CO2 out of the atmosphere. Before the century was out we might even be on track back to 350. We might stop just short of some of those tipping points, like the Road Runner screeching to a halt at the very edge of the cliff.

More likely, though, we’re the Coyote — because “doing everything right” means that political systems around the world would have to take enormous and painful steps right away. It means no more new coal-fired power plants anywhere, and plans to quickly close the ones already in operation. (Coal-fired power plants operating the way they’re supposed to are, in global warming terms, as dangerous as nuclear plants melting down.) It means making car factories turn out efficient hybrids next year, just the way we made them turn out tanks in six months at the start of World War II. It means making trains an absolute priority and planes a taboo.

It means making every decision wisely because we have so little time and so little money, at least relative to the task at hand. And hardest of all, it means the rich countries of the world sharing resources and technology freely with the poorest ones, so that they can develop dignified lives without burning their cheap coal.

That’s possible — we launched a Marshall Plan once, and we could do it again, this time in relation to carbon. But in a month when the President has, once more, urged us to drill in the Arctic National Wildlife Refuge, that seems unlikely. In a month when the alluring phrase “gas tax holiday” has danced into our vocabulary, it’s hard to see (though it was encouraging to see that Clinton’s gambit didn’t sway many voters). And if it’s hard to imagine sacrifice here, imagine China, where people produce a quarter as much carbon apiece as we do.

Still, as long as it’s not impossible, we’ve got a duty to try. In fact, it’s about the most obvious duty humans have ever faced.

A few of us have just launched a new campaign, 350.org. Its only goal is to spread this number around the world in the next 18 months, via art and music and ruckuses of all kinds, in the hope that it will push those post-Kyoto negotiations in the direction of reality.

After all, those talks are our last chance; you just can’t do this one light bulb at a time. And if this 350.org campaign is a Hail Mary pass, well, sometimes those passes get caught.

We do have one thing going for us: This new tool, the Web which, at least, allows you to imagine something like a grassroots global effort. If the Internet was built for anything, it was built for sharing this number, for making people understand that “350” stands for a kind of safety, a kind of possibility, a kind of future.

Hansen’s words were well-chosen: “a planet similar to that on which civilization developed.” People will doubtless survive on a non-350 planet, but those who do will be so preoccupied, coping with the endless unintended consequences of an overheated planet, that civilization may not.

Civilization is what grows up in the margins of leisure and security provided by a workable relationship with the natural world. That margin won’t exist, at least not for long, this side of 350. That’s the limit we face.

Bill McKibben is a scholar-in-residence at Middlebury College and co-founder of 350.org. His most recent book is The Bill McKibben Reader.

This entry was posted in RagBlog and tagged Energy, Environment, Global Warming, The World. Bookmark the permalink.