Lest we forget, the war in Iraq and the subsequent ethnic cleansing have displaced roughly 4 million Iraqis, 2.5 million internally and another 1.5 million who have left the country, perhaps permanently. For the European Union to agree to accept 10,000 of that 1.5 million is little more than a slap in the face to those Iraqis facing the hardship of displacement from their homeland. I believe it is crucial that those responsible for this debacle be brought to the International Court to answer for the war crimes they have committed. 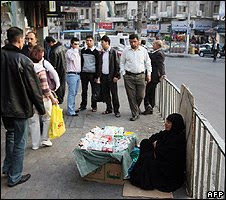 The European Union says it is ready to accept up to 10,000 Iraqi refugees, many of whom are living in extreme hardship in Jordan and Syria.

The agreement came at an EU meeting in Brussels on Thursday, where interior ministers received a new report on conditions at refugee camps.

Germany said it would take in about 2,500 of the refugees.

Priority will be given to those with medical needs, torture victims, single mothers and religious minorities.

The UN refugee agency, the UNHCR, welcomed the EU pledge as a “positive step”, saying it had been pressing the EU for 18 months to offer more protection to vulnerable Iraqi refugees.

So far, only 10% of those resettled by the UNHCR have found a home in EU countries, mainly Sweden and the Netherlands, the BBC’s Oana Lungescu reports from Brussels.

Sweden says it received about 18,000 Iraqi asylum seekers in 2007 – more than half the total that entered the EU last year.

Sweden has a well-established Iraqi community totalling about 100,000 but says other EU countries should take in a bigger share of Iraqis, who have mostly fled violence and poverty.

Not a binding commitment

A UK Home Office spokesperson said the UK had “already shown its clear determination to support Iraqi refugees through the Gateway Programme, with over 200 people resettled in the UK since April and more arriving in the coming months”.

“We will continue to work with our European partners to ensure that Iraqi refugees are resettled across Europe,” the spokesperson added.

An EU expert group that toured Iraqi refugee camps in the Middle East recently said conditions were worsening for most of the refugees, because their savings were dwindling and they did not have work permits, German media reported.

The EU decision to resettle the refugees is voluntary, rather than binding, and is unlikely to reverse the current trend, our correspondent says. So far, most Iraqi refugees have been taken in by the United States, Canada and Australia.

This entry was posted in RagBlog and tagged Europe, Iraq, Iraq War, Refugees. Bookmark the permalink.