Vagina Monologues author, Eve Ensler, participated in a special performance in Austin on Friday, March 14th. Austin supported three productions, including one in Spanish, to mark the 10th anniversary of V-Day. The play has become a global catalyst in the movement to stop violence against women.

The Friday performance was particularly poignant with its focus on women in the US military who have been sexually assaulted and raped by fellow soldiers. According to Department of Defense statistics, one in three women in the military will be raped during their military service.

Friday’s production, organized by Sascha Tunney, drew several hundred to an outdoor venue called the Enchanted Forest. It raised funds for the Katrina Warriors Network, the Service Women’s Action Network and the Settlement Home for Children.

Five women spoke Friday about sexual assault and rape in the military – Dorothy Mackey and April Fitzsimmons, US Air Force, Suzanne Swift, US Army, with her mother, Sara Rich, and Ann Wright. Col. Wright spent 29 years in the Army and was one of three US diplomats who resigned in 2003 in opposition to the war in Iraq. She is well known to many Austinites who spent time at Camp Casey in Crawford, Texas.

Under the South Austin trees, musicians Carolyn Wonderland and Patrice Pike began the show. There were celebratory chocolate vagina pops and vagina stickers. In contrast, tables at the entrance struck a somber note, offering resources to victims of domestic violence. The monologues brought laughs and tears to the audience. The vagina stories of discovery, pleasure, brutality, and birth have moved millions around the world to take action to stop violence against women.

On April 12h, Eve Ensler will participate in a V-Day production in New Orleans. 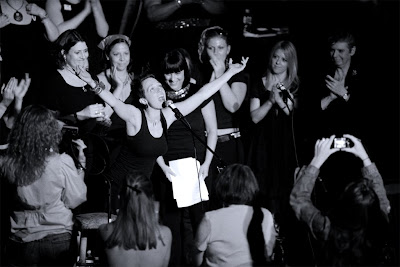 The special Austin Performance of Vagina Monologues.
The Rag Blog

This entry was posted in RagBlog and tagged Arts, Dissent, Military, Music, Women. Bookmark the permalink.