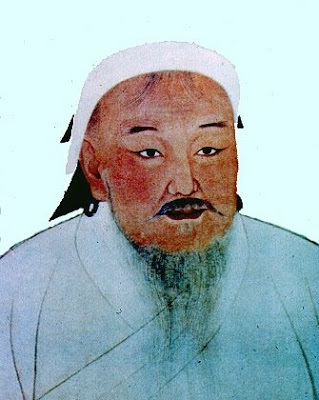 Genghis Kahn. Art from Chinese Culture / Brooklyn College.
Torture and the complicity of the physician

Thomas Jefferson wrote in a letter to Thomas Cooper in 1823: “Man is fed with fables through life, and leaves it in the belief he knows something of what has been passing, when in truth he has known nothing but what has passed under his own eye.”

There is an old adage that “young men have visions and old men dream dreams.” As a physician I have felt dirty, I have felt violated, by the fact that physicians were involved in the vile practices that my country has carried out at our detention facilities at Guantanamo. We, a profession dedicated to healing, to alleviate suffering, were overtly complicit in causing pain and suffering to other human beings that might — and I emphasize “might” — have been involved in doing harm to other human beings.

To compound the insult the administration seemingly has forgotten the Nuremberg trials and the so-called “Nuremberg Defense” (“I was ordered to do it”). Quite a few German subordinates went to the gallows or to prison because the tribunal at Nuremberg felt that this defense was without merit. The entirety of this hypocrisy is reviewed by Ray McGovern in an April 23 article in Common Dreams.

On television program after television program we are informed of the “complexities” of the problem. What is “torture,” what is “enforced interrogation?” That is the same as asking, “Did he have ‘sex’ or did he have ‘intercourse?’” Hours are spent parsing words, playing semantic games, trying to confuse the uninformed public. I watch this foolishness, this propaganda , and ask myself, “How did colleagues of mine become involved in this vile, immoral, unethical, endeavor?” This is naive on my part, as I have read, with much soul searching, Dr. Robert Jay Lifton’s horrifying book “The Nazi Doctors.” One would hope that anyone interested in the controversy currently with us would take time to read Dr. Lifton’s book. Are American physicians any more or less sophisticated than were our German colleagues?

We have the word of many interrogation experts — from the CIA, FBI, army, navy, air force — that information is much more easily obtained by civil means than by resorting to humiliation and pain. This was even apparent to Genghis Khan who forbade torture of his prisoners. Granted Khan was a brutal warrior, a master of the battlefield; however, once he had conquered he had the foresight to run a generally benevolent administration, with personal and religious freedom.

The classic example of the futility of torture in historical context reverts to the ongoing torture of Jacques de Molay in 1314. When the treasury of King Phillip IV of France ran dry, his advisers suggested that he destroy the order of The Knights Templar and take for himself the suspected considerable treasure that they had accumulated. Hence, with the approval of Pope Clement V, he undertook the task of arresting, executing and exiling many of the members. There are many historical variations, theories, of detail; hence, we will not try and resolve these problems. However, one thing is sure: de Molay, the Grand Master, was tortured for many days, being nailed to his wooden cell door with nails through his hands; he was beaten, burned, and humiliated, but he never broke (if, indeed, he was even aware of the treasure’s existence). He went to the pyre without giving any information to Phillip. The classic tale has him cursing Phillip and Clement from the pyre, invoking their deaths — and both died within the year.

There are more recent examples such as the Gestapo torture of the French Resistance members, whom they alluded to as “terrorists,” with dental drills and pincers, or the classical Chinese “death of 1000 cuts.” One may refer to the Philippine Insurrection, after the Spanish American War. Little appears in U.S. History books regarding that event, but it lasted some years, destroyed thousands of lives, primarily among the natives, and produced the concept of waterboarding.

Largely as a result of Nuremberg the international community enacted an international ban on torture and emphasized it in the Geneva Convention. The nations of the civilized world adhered to the premise until George W. Bush, almost immediately after taking office, and long before 9/11, decreed that the United States would not be a member of the International Criminal Court. At the time I wondered why, but after the misinformation about 9/11 and subsequent events it became crystal clear. Now we can pride ourselves in joining Pol Pot and Idi Amin, in violating these concepts.

Should we be surprised at the developments? Not those of us aware of the plans and programs which came about as a result of the “brainwashing” of our troops during the Korean War. One can turn to the research done at McGill University under the auspices of clandestine departments of the U.S. government. It is these methods that are now applied to the prisoners at Guantanamo Bay and Abu Ghraib. In the 1950s a Montreal doctor was funded to perform bazaar experiments on his psychiatric patients, keeping them asleep and in isolation for weeks, then administering huge doses of electroshock and experimental drug cocktails, including the psychedelic LSD and the hallucinogenic PCP, commonly known as angel dust.

This story is detailed in all of its horror in the initial chapter of Naomi Klein’s The Shock Doctrine. I will quote one paragraph:

“In 1988 The New York Times ran a groundbreaking investigation into U.S. involvement in torture and assassinations in Honduras. Florencio Caballero, an interrogator with Honduras’s brutal Battalion 3-16, told The Times, that he and twenty-four of his colleagues were taken to Texas and trained by the CIA. ‘They taught us psychological methods — to study the fears and weaknesses of a prisoner. Make him stand up, don’t let him sleep, keep him naked and isolated, put rats and cockroaches in his cell, give him bad food, serve him dead animals, throw cold water on him, change the temperature.’”

This was part of a program funded by the U.S. government consisting of a decade of research in the 1950s, costing $25 million, involving 80 institutions, seeking to find new ways to break prisoners suspected of being Communists and double agents. It was first code-named Project Bluebird, then Project Artichoke, and finally renamed MKUltra. Interestingly most of the paperwork has vanished from official archives.

I took the Hippocratic Oath in 1943 and did my best over many years to adhere to its tenants. When I know that colleagues of mine were involved in the inhumanities at Guantanamo, I feel revulsion. Several certified psychologists were involved, early on, in the interrogations and their names have become part of the public record. I would hope that the leaders in the field of medical ethics would choose to speak up regarding the physicians involved even though the revelations are cloaked in the excuse, “They were merely following orders.” I would suggest that we as professionals in the future not co-mingle with the degenerates who achieve pride in becoming the torturer.

Finally, we are indoctrinated to believe that harsh methods are needed in case, for instance, that an atomic device has been placed in an American city and a suspect taken into custody. Is torture permissible in that instance? Can anyone imagine a terrorist group, aware of this possibility, choosing a trigger man who would break under torture? Come on, if these folks will put on explosive belts, to maim and kill themselves and others, they would select a perpetrator with care and be assured that, in deference to Allah, he would not give way to earthly pain and suffering.