Exclusively Using the Wind for Power 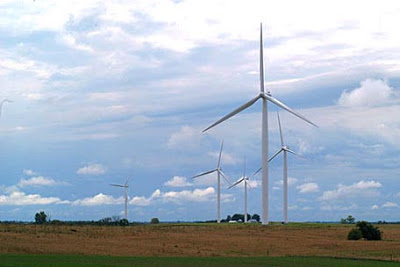 The four turbines that supply electricity to the small town of 1,300 residents make it the first community in the United States to operate solely on wind power.

“That’s something to be very proud of, especially in a rural area like this — that we’re doing our part for the environment,” said Jim Crawford, a natural resource engineer at the University of Missouri Extension in Columbia.

A map published by the U.S. Department of Energy indicates that northwest Missouri has the state’s highest concentrations of wind resources and contains a number of locations that are potentially suitable for utility-scale wind development. The four turbines that power Rock Port are part of a larger set of 75 turbines across three counties that are used to harvest the power of wind.

“We’re farming the wind, which is something that we have up here,” Crawford said. “The payback on a per-acre basis is generally quite good when compared to a lot of other crops, and it’s as simple as getting a cup of coffee and watching the blades spin.”

And the turbines have another benefit besides produces clean energy: MU Extension specialists said that the Missouri wind farms will bring in more than $1.1 million annually in county real estate taxes, to be paid by Wind Capital Group, a wind energy developer based in St. Louis.

“This is a unique situation because in rural areas it is quite uncommon to have this increase in taxation revenues,” said Jerry Baker, and MU Extension community development specialist.

Landowners can also benefit by leasing part of their property for wind turbines.

The turbines will also provide savings to rural electric companies and will provide electric service for at least 20 years, the anticipated lifetime of the turbines.

“Anybody who is currently using Rock Port utilities can expect no increase in rates for the next 15 to 20 years,” Crawford said.

Baker added that the turbines could also attract tourists to the area.

This entry was posted in RagBlog and tagged Alternative Energy, Wind Turbines. Bookmark the permalink.