Expanding on Our Humanness and Sacredness 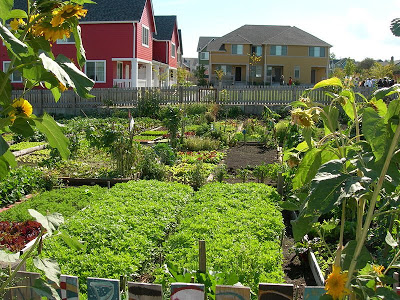 You Say You Want a Revolution?
by Olga Bonfiglio

General Motors’ July 15 announcement that it will cut white-collar employment costs by 20 percent is just one more nail in the industrial coffin.

Actually, this job-cutting phenomenon isn’t new. It’s been going on since the 1960s when the car companies began automating blue-collar assembly line jobs. Since the 1980s they have been steadily chipping away at the white-collar jobs by offering middle managers early retirement buy-outs.

This is the next American revolution, said Dr. Grace Lee Boggs, 93, a long-time Detroit activist and a Bryn Mawr-educated philosopher.

In other words, a new epoch is emerging that emphasizes relationships and communities more than the accumulation of things — and the counting of profits.

A trip to Greenfield Village and the Henry Ford Museum in Dearborn, a mere 30 minutes from downtown Detroit, illustrates how the nineteenth century Industrial Revolution grew into the twentieth century consumerist society, which was plush with inventions and conveniences that raised the living standards of middle class Americans. People could afford these products because so many of them left their farms and took higher-paying factory jobs in the cities. However, those good wages came at a price: people became mindless cogs in a giant machine, as Charlie Chaplin depicted in the film, “Modern Times.”

Industrialization was a far cry from the first American Revolution of 1776, which was about people giving of themselves for the larger community, said Grace. That sentiment yielded to a European colonial mentality that justified taking natural resources from Africa, Asia and Latin America in order to manufacture products and sell them at huge profits.

“We need to face the way we used the world for our gains, pleasures, satisfactions,” said Grace. “This is the way we evolve to a higher stage of humanity. And unless we want to live in terror for the rest of our lives, we need to change our view about acquiring things.”

The industrial society also skirted social justice concerns by focusing on jobs and paychecks as a means of keeping the economy going and the people happy. It didn’t face the fact that the workers were demeaned and deskilled or that some of the products they made (like military equipment) or some of the processes they used (which involved dangerous chemicals) could be harmful.

Actually, people have only had “jobs” for the past 100 years. These jobs had nothing to do with being productive, making products essential for living or deriving personal growth or the enjoyment of life. Jobs led people to believe that anything they did for pay was good — no matter how destructive it was to the person, the community or the environment.

Now, in the twenty-first century after hundreds of thousands of jobs have been moved offshore and collapsed many local economies, Grace believes that the way has been cleared for the next American revolution, especially since a number of other factors make the need for change both obvious and necessary:

* Polarization of the rich and poor in the United States and in the global North and South;

* Economic instability with trillions of dollars of debt, housing foreclosures and the loss of local small businesses and farms.

She said that the turning point occurred in 1999 when protesters’ demonstrations effectively closed the World Trade Organization (WTO) meeting held in Seattle. A worldwide movement was kicked off to challenge the rapacious global economy that was shifting the labor market to the lowest bidder in a kind of race to the bottom.

“We usually think of revolution as violence,” said Grace. “However, revolution is more about envisioning what is possible when it appears that things are changing.” She believes that Detroit, in particular, is fertile ground for this next revolution because it is such a devastated city.

Detroit has 70,000 vacant lots where neighborhoods and commercial properties once stood. And although the city looks like it has been bombed, Grace sees a silver lining: the city no longer has to adhere to the usual capitalist mantra of growth and expansion because it is absolutely clear that the industrial system is finished. This fact allows citizens to respond by starting something new all over again.

Grace and her husband, Jimmy Boggs (now deceased), a 30-year Chrysler autoworker, and a host of their friends began articulating the next revolution in the 1980s. Their work eventually planted the seeds for “Detroit Summer” in 1992 where young and old would re-generate their neighborhoods by developing community gardens and producing public works of art.

Gardens are also affecting larger issues like reducing crime, cleaning up trash-strewn lots, connecting people to nature, nurturing leadership in citizens young and old and improving property values. What’s more, gardens have rekindled people’s hope in the future, a sentiment missing in Detroit since the “rebellion” of 1967.

This revolution urges citizens not to stand around and wait for leaders to initiate needed changes. Instead, individuals are learning that they can enlist others to help them rebuild their communities. Interestingly, it’s the young who are especially stepping up to this challenge through local service programs, college projects, and the creation of small businesses and organizations.

“What we’re witnessing is a national government that is incapable of solving the questions of our society and our world because politicians are so subject to lobbyists and corporations that fund their campaigns, that they can’t do what needs to be done,” said Grace.

She cited Paul Hawken’s book, “Blessed Unrest,” which discusses how small groups all over the world are rebuilding their communities from the ground up and changing the world because people are connecting to one another.

“We have the opportunity to take a great leap forward in these very challenging times,” said Grace. “We need to change our institutions and ourselves. We need to seize opportunities. We need to launch our imaginations beyond the thinking of the past. We need to discern who we are and expand on our humanness and sacredness. That’s how we change the world, which happens because WE will be the change.”

[Olga Bonfiglio, who grew up in Downriver Detroit and graduated from Wayne State University in Detroit, is now a professor at Kalamazoo College where she teaches a class in urban revitalization. Her website is http://www.olgabonfiglio.com/ and her e-mail address is olgabonfiglio@yahoo.com.]

This entry was posted in RagBlog and tagged Economy, Environment, Globalization. Bookmark the permalink.