Extraordinary Rendition: Not Yet Obsolete 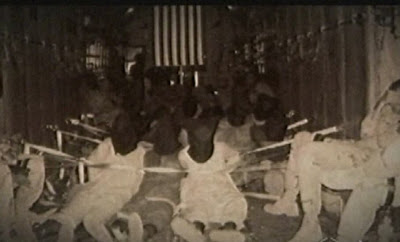 Lebanese man is target of first rendition under Obama

Contractor Raymond Azar is arrested in Afghanistan, hooded, stripped and flown to the U.S. His alleged crime? Bribery. A human rights activist calls the case ‘bizarre.’

ALEXANDRIA, Va. – A Lebanese citizen being held in a detention center here was hooded, stripped naked for photographs and bundled onto an executive jet by FBI agents in Afghanistan in April, making him the first known target of a rendition during the Obama administration.

Unlike terrorism suspects who were secretly snatched by the CIA and harshly interrogated and imprisoned overseas during the George W. Bush administration, Raymond Azar was flown to this Washington suburb for a case involving inflated invoices.

Azar, 45, pleaded guilty Tuesday to conspiracy to commit bribery, the only charge against him. He faces a maximum of five years in prison, but a sentence of 2 1/2 years or less is likely under federal guidelines.

Defense lawyers and prosecutors declined to comment on the case Friday.

“He was treated like a high-security terrorist instead of someone accused of a relatively minor white-collar crime,” she said.

Justice Department lawyers have denied any misconduct in the case.

“The FBI followed standard operating procedures when transporting prisoners to the United States,” Gina Talamona, a Justice Department spokeswoman, said Friday. She said restraints “were used with the sole purpose of ensuring the safety of the defendants and the agents.”

As the Obama administration steps up efforts to curb fraud at military facilities in Iraq and Afghanistan, a senior Army official said Azar’s case “should serve as a warning” to other contractors.

In court papers, Azar said he was denied his eyeglasses, not given food for 30 hours and put in a freezing room after his arrest by “more than 10 men wearing flak jackets and carrying military style assault rifles.”

Azar also said he was shackled and forced to wear a blindfold, dark hood and earphones for up to 18 hours on a Gulfstream V jet that flew him from Bagram air base, outside Kabul, to Virginia.

Before the hood was put on, he said, one of his captors waved a photo of Azar’s wife and four children and warned Azar that he would “never see them again” unless he confessed.

“Frightened for his immediate safety . . . and under the belief he would end up in the prison camp at Guantanamo Bay or Abu Ghraib to be tortured,” Azar signed a paper he did not understand, his lawyers told the court.

Prosecutors, however, said that Azar was “treated professionally,” kept in a heated room, offered food and water repeatedly and “provided with comfortable chairs to sit in.”

They said he was photographed naked and subjected to a cavity search to ensure that he did not carry hidden weapons and was fit for travel. Court records confirmed that Azar was shackled at the ankles, waist and wrists and made to wear a blindfold, hood and earphones aboard the plane.

Prosecutors also said that FBI agents read Azar his rights against self-incrimination on three occasions, and that he “voluntarily” waived them.

The FBI agent in charge, Perry J. Goerish, denied in an affidavit that Azar was “told he would never see his family again unless he confessed.”

Arrested along with Azar was Dinorah Cobos, 52, a naturalized American from Honduras. Cobos, who did not make the same claims of abuse, this week pleaded guilty to conspiracy and bribery.

Their case is different from the widely criticized “extraordinary renditions” carried out after the Sept. 11 attacks. In those cases, CIA teams snatched suspected Al Qaeda members and other alleged terrorists overseas and flew them, shackled and hooded, to prisons outside the United States without any arrest warrants or other judicial proceedings.

The FBI arrested Azar and Cobos with warrants signed by a federal magistrate. And the State Department, Talamona said, asked the government of Afghanistan “for its consent in advance to take these two individuals into custody and return them to the United States to stand trial. They consented to our request.”

Azar and Cobos worked for a Lebanese construction company, Sima Salazar Group, which was awarded more than $50 million in Pentagon contracts for reconstruction and supply work in Afghanistan. In December, according to the indictment, the pair offered to pay kickbacks to an Army Corps of Engineers officer in Kabul. In exchange, he agreed to approve $13 million in outstanding bills from Sima Salazar.

Over the next four months, according to the charges, more than $106,000 was wired to the officer’s bank account in Manassas. But the case was an FBI sting, and Azar and Cobos were arrested at Camp Eggers, a U.S. military base in Kabul, after being lured to a meeting April 7.

On Wednesday, Cobos’ sister, Gloria Martinez, 61, pleaded guilty in federal court in New Orleans to conspiracy and two counts of bribery in a related case. Prosecutors said Martinez, a senior Army Corps of Engineers official, accepted $425,000 in cash, jewelry and other gifts for herself and Cobos from companies seeking military contracts in Iraq and Afghanistan.

As a candidate last year, President Obama vowed to end “the practice of shipping away prisoners in the dead of night to be tortured in far-off countries.”

After taking office, he ordered the CIA to close its network of “black site” prisons and promised to shutter the detention camp at Guantanamo Bay, Cuba.

The Justice Department has seized and transported foreign drug lords, terrorists and other high-profile fugitives to U.S. courtrooms when normal extradition was not considered possible. The Supreme Court ruled in 1992 that such renditions, as the transfers are known, are permissible.

In 1997, for example, FBI agents in Pakistan captured Mir Aimal Kasi, who was on the FBI’s Ten Most Wanted list, and returned him to Washington to stand trial. Kasi was convicted of murder in the killing of two CIA employees and was executed in Virginia in 2002.

Azar is hardly in the same league, but Talamona pointed out that “we take very seriously criminal fraud against the United States government.”

This entry was posted in RagBlog and tagged American Hegemony, Geneva Conventions, War on Terror. Bookmark the permalink.

1 Response to Extraordinary Rendition: Not Yet Obsolete