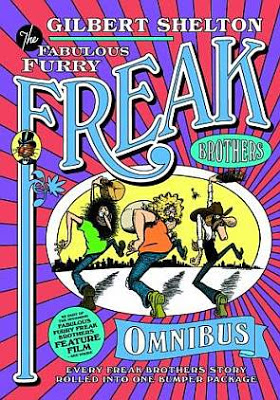 This August, the U.K. comics publisher, Knockabout Comics will answer the prayers of classic underground comics aficionados with the publication of a massive 40th anniversary Freak Brothers Omnibus, a 624-page leviathan of laughs, straight from the mind of creator Gilbert Shelton. The book collects every adventure of the hirsute trio since their inception in 1968, as well as previously unpublished material.

The book’s first printing of 10,000 copies will feature an extra dust jacket and an insert detailing how the interested fan can donate funds and invest in Grass Roots, an upcoming animated film featuring the characters, and even get their names inserted into the corner of one of the film’s frames in a promotion called “Name That Frame.” (The investor purchases a frame and their name will be visible only when the film is slowed down on a DVD player). American distribution of the book will be handled by Diamond, Last Gasp, and Rip Off Press for the comics shop specialty market and by Atlas books for Barnes & Noble, Amazon, Borders and independent general book retailers.

But exactly what is the Freak Brothers series and why does it warrant such red carpet treatment? Simply put, The Fabulous Furry Freak Brothers is the Rosetta Stone (no pun intended) of “stoner” humor as we now understand the genre, predating Cheech & Chong’s THC-based antics by a few years and offering narratives that are often hilarious without the aid of various illegal “party favors.” The series revolves around the eponymous characters, a trio related not by blood, but by a common interest—the need for weed—and loony adventures in a rollicking counter-culture universe. The trio includes Phineas (the leftist intellectual), Freewheelin’ Franklin (the baked cowboy), and Fat Freddy (the “Curly” of the bunch). Their lives are driven by marijuana and they spend virtually all of their time trying to get stoned while avoiding the police or getting ripped off by unscrupulous dealers.

But unlike many of its underground contemporaries that wallowed in explicit sex, ultra-violence, and sometimes outright misogyny, the Freak Brothers strips concentrated on solid laughs and earned them and their creator an enduring following among the underground comix cogniscenti and beyond. When asked about how he settled upon his approach to the material Shelton reminisced, “I used to sell strips to weekly leftist newspapers. I was in sympathy with them but they were deadly dull, so I felt they could use a comic strip modeled on old comics.”

Shelton said at the time that he was “more into traditional comic strips like Chester Gould’s Dick Tracy, which seemed outrageously weird when seen from a grownup perspective. Other strips I enjoyed included Bob Montana’s Archie, Peanuts, B.C., The Wizard of Id, Miss Peach, and the old E.C. stuff, especially the original run of Mad when it was still a comic book.” That last influence must have been particularly strong since Shelton’s work on the Freak Brothers seemed like the next logical step from its 1950’s antecedent. The Freak Brothers comics were infused with the same anarchic energy and endearing silliness, only now unleashed in an era of free love and psychedelic mind-expansion. As for the inspiration behind the trio’s comedic adventures, Shelton said, “I took the ambience from real life and used gags that used to be based around alcohol and substituted marijuana for the booze. Take the one about the hippy getting busted on a possession charge and being told by the arresting officer that he had one phone call. The guy uses that call to get a pizza delivery.” And when not focusing on the Brothers themselves, Shelton turns his humorous eye to the antics of Fat Freddy’s Cat, a side-strip also featured in the omnibus that’s every bit as entertaining as the book’s main event.

The enduring popularity of the Freak Brothers has led to the production of Grass Roots, a stop-motion animated feature, but the project has not had smooth sailing; according to Shelton. “Grass Roots has been in progress for five years and Bolex Brothers, a hugely talented studio in Bristol, England, is handling it while actively raising money to fund it,” Shelton explained. He said this was the “6th or 8th time” the rights to a Freak Brothers film have been sold, “including once having been in the hands of Universal some thirty years ago. Obviously nothing came of that.”

Hopefully the combined efforts of the Bolex Brothers and the series’ rabid fan base will result in a happy ending for Shelton and Freak Brothers enthusiasts everywhere and the trio will finally make their bong-hitting way onto the silver screen alongside such stoner descendants as Cheech & Chong and Harold and Kumar. But until then, there are always Shelton’s stories to get us through these Freak-less times. In fact, the book serves as an echo of Shelton’s timeless credo: “Dope will get you through times of no money better than money will get you through times of no dope.” Words to live by, especially in the waning days of Dubya’s America.

The Bristol, England film production company Bolexbrothers is still trying to raise money to do their feature-length stop-action animated movie of the Freak Brothers in Grass Roots. They did a few minutes of test footage a couple of years ago which can be seen at Grass Roots the Movie.

If you manage to find this site, you might recognize the voice of Telebob in the intro. Bolexbrothers (and I, too) thought that money would come raining in from rich ex-hippies, but maybe there’s no such thing.

Thanks to radman / The Rag Blog