FCC Decision : Milestone in the Fight for Internet Rights 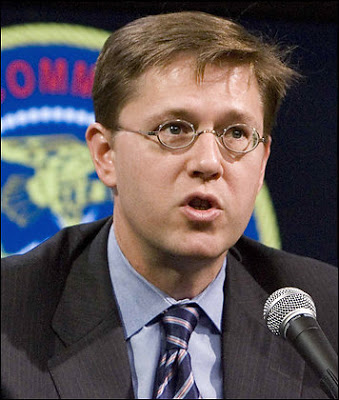 Kevin Martin says Comcast’s actions are like a post office blocking mail. Photo by AP.
‘It’s the first time the FCC has gone to such lengths to assert users’ right to an open Internet’
By tkarr / August 20, 2008

It’s official. The Federal Communications Commission published its order today lowering the hammer on Comcast for derailing Internet users’ Web access and then pretending that the cable giant was doing nothing wrong.

The order, approved by a bipartisan FCC majority at the beginning of the month, demands that Comcast “must stop” its ongoing practice of blocking Internet content by year’s end.

As we have written before, this action carries considerable weight.

It’s the first time the FCC has gone to such lengths to assert users’ right to an open Internet. And it sends a warning shot across the bow of other major ISPs that are flirting with the idea of blocking, filtering or degrading content, or favoring certain Web sites and services over others.

“This order marks a major milestone in Internet policy,” says Ben Scott, Free Press policy director. “For years, the FCC declared that it would take action against any Internet service provider caught violating the online rights guaranteed by the agency. Today, the commission has delivered on that promise.”

The order concludes the FCC’s months-long investigation, which included two public hearings at Harvard and Stanford universities — and more than 25,000 public comments.

“This clear legal precedent signals that the future of the Net Neutrality debate will be over how, not whether, to protect users’ right to an open Internet,” Scott says.

Comcast and its Astroturf allies swamped the FCC with filings that challenged the agency’s authority and outright denied any wrongdoing. But the smackdown of Comcast’s claims issued today makes clear that the agency is on solid legal footing, and Comcast clearly in the wrong.

“The Communications Act has long established the federal agency’s authority to promote the competition, consumer choice, and diverse information across all communications platforms,” explains Marvin Ammori, Free Press’ legal counsel, who authored the 2007 complaint against the cable giant.

In 2005, the agency unanimously adopted an Internet policy statement that “extended these rights to Internet users – including the right to access the lawful content, applications and services of their choice.”

That statement served the basis for the Free Press complaint, which set the wheels of the FCC churning towards today’s welcome result.

The FCC was unconvinced by Comcast’s attempts to evade accountability. The order finds that Comcast’s repeated “verbal gymnastics” and attempts to muddy the issue of blocking were “unpersuasive and beside the point.”

The commissioners were especially outraged by Comcast’s lies and deception. When it first got caught blocking the Internet, the cable giant “misleadingly disclaimed any responsibility for its customers’ problems,” according to the FCC order, followed by “at best misdirection and obfuscation.”

Contrary to the spin of Comcast’s lawyers, the FCC can protect the rights of Internet users, and promote openness, free speech and competition on the Web.

ISPs Don’t Own the Internet

Still, the FCC cannot act without first receiving complaints from users. Cable and phone companies would now be wise to obey the order and resist their gatekeeper tendencies.

But the public also needs to continue to keep watch over the Internet, and to call for FCC action against abuses of our Internet rights.

Source / Save the Internet

In all of my experience reviewing government decisions affecting the Internet, I have read none that are more subtle and sophisticated in their understanding of the Internet, and few that are as important for setting the conditions under which innovation and competition on the Internet will flourish.

…By secretly adding a layer of secret sauce into the Internet that interferes with legitimate applications and network services, Comcast has injured the value of the Internet to other innovators. By denying that it has done this, it has added insult to that injury. The Commission has done us all a great service by stating clearly that it will assure that the platform for innovation that the Internet is will not be compromised by such behavior.

This entry was posted in RagBlog and tagged Comcast, FCC, Freedom of Press, Internet, Internet Rights. Bookmark the permalink.

1 Response to FCC Decision : Milestone in the Fight for Internet Rights