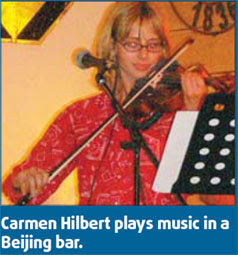 Carmen jams with a Texas touch

BEIJING — From Wednesday to Sunday, Carmen Hilbert joins a collection of lone-star imports at her uncle’s restaurant, Tim’s Texas Roadhouse.

Hilbert brings the music. With fiddle in hand and a guitarist for accompaniment, she rocks the bar that is heavily represented by Texan patrons.

“I wanted to bring Texas-style music here,” Tim Hilbert says. “Carmen had the skills and passion to do it.”

Two days off the plane, Hilbert wrapped up an afternoon practice session to an unexpected request. Her uncle asked her to play that evening. It was after 5 pm, and the band was to start at 7:30. But the recent high school graduate wasn’t fazed.

Although young, Hilbert is no rookie to the music scene.

She has played violin since 6 but strayed from classical music when her teacher, who had played in honky tonk bars for years, introduced her to the retro country sound. Soon she was playing gigs at local bars in Austin, Texas.

In eighth grade, Hilbert put her fiddle playing on hold to pursue dance but had no problem returning to the instrument several years later.

When not performing, she learns Chinese and braves the public transportation system in search of quality eateries.

Homework is also on the agenda. She has to read Homer’s epic, The Iliad, for a class at Reed College in Oregon, where she will major in linguistics.

Meanwhile, Hilbert is mulling over her musical future. She is considering pursuing music recreationally. “I’m thrilled to pick violin up again,” she says.

This entry was posted in RagBlog and tagged Austin, China, Music, Musicians, Texas. Bookmark the permalink.