Fidel: ‘Cuba Has Been the Victim of Terrorism for Many Years’ 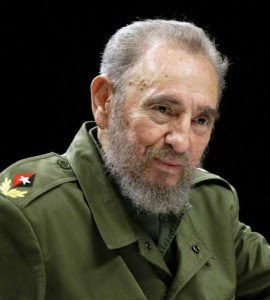 Reflections by Comrade Fidel – Cuba: A Terrorist Country?
By Fidel Castro Ruz / May 2, 2009

“Cuba has been the victim of terrorism for many years and it has a completely clean record in this matter. Cuban territory has never been used to organize, fund or execute terrorist acts against the United States of America. The State Department which issues those reports cannot say the same.”

Thursday, April 30 was unlucky for the United States. On that day it occurred to them to include Cuba yet again on the list of terrorist countries. Committed as they are to their own crimes and lies, perhaps even Obama himself was unable to untangle himself from that mess. A man whose talent nobody denies must feel ashamed about the empire’s cult of lie. Fifty years of terrorism against our Homeland come to light in an instant.

What can one explain to those who know about the horrific event of a plane blown up in mid flight, with its passengers and crew, about the participation of the United States in the events, the recruiting of Orlando Bosch and Posada Carriles, and the supplying of explosives, funds and the complicity of the intelligence agencies and the authorities of that country? How can one explain the campaign of terror that preceded and followed the mercenary invasion of the Bay of Pigs, the attacks on our coasts, towns, transport and fishing vessels, the terrorist actions inside and outside of the United States? How can one explain the hundreds of frustrated assassination plots on the lives of Cuban leaders? What can one say about the introduction of viruses such as hemorrhagic dengue and swine fever that genetically had never even existed in the hemisphere? I am merely mentioning some of the acts of terror in which the United States has played a part, the ones recorded in their own declassified documents. Don’t these events embarrass the current administration?

I could put together an endless list of abhorrent activities.

At our request, Bruno Rodríguez, Minister of Foreign Affairs, sent me the exact words used by a France-Presse reporter to ask him a question on April 30, along with his compelling answer.

Rigoberto Díaz, of AFP: “Coinciding with the final moments of this meeting and also on a subject that has been dealt with during this event, the US government has once more included Cuba on the list of countries sponsors of terrorism along with Sudan, Iran and Syria. I would like to hear your opinion on this.”

“We do not recognize any political or moral authority to the US government to make any list on any subject, or to “certify” good or bad behavior.

The Bush government was “certified” by world public opinion as a government violating international law; as being aggressive and war-mongering; as a government that tortures and that is responsible for extrajudicial executions.

“Bush has been the only president who has boasted in public, in the US Congress, about having carried out extrajudicial executions. That is a government which kidnapped people and transported them illegally, created secret prisons that nobody knows whether they are still in existence, and a concentration camp where torturing is going on in the part of territory usurped from the Republic of Cuba.

“In the matter of terrorism, the US government has historically held a long record of State terrorism acts, not only against Cuba.

“In the US, Orlando Bosch and Posada Carriles are free to come and go; these two who are responsible for numerous terrorist acts including the blowing up of a civilian Cuban plane in mid-flight. There is no answer to Venezuela’s official request for the extradition of Posada Carriles who is being tried for various charges, but not as a notorious international terrorist.

“The US government held a travesty of a trial against the five young Cuban anti-terrorist activists who are today being held as political prisoners in its jails.

“The US government covers up acts of State terrorism committed by Israel against the Palestinian people and the Arab peoples. And, it kept silent before the crimes taking place in the Gaza Strip.

“Therefore one shouldn’t recognize that the United States has any moral authority whatsoever, and I, frankly, believe that nobody pays any attention or reads those documents, among other things, because the author is an international outlaw in many of the matters which it criticizes.

“Cuba’s position against all manifestations and forms of terrorism, wherever they may be committed, against any state that may be affected, in any form it may be carried out, for whatever purpose, is clear and consistent with its actions.

“Cuba has been the victim of terrorism for many years and it has a completely clean record in this matter. Cuban territory has never been used to organize, fund or execute terrorist acts against the United States of America. The State Department which issues those reports cannot say the same.”

This declaration, issued at the ministerial meeting of the Non-Aligned Countries, is not yet widely known by the population which in these days has been receiving plenty of news of all kinds. If the State Department wishes to discuss this with Bruno, there is sufficient information to bury it in its own lies.

1 Response to Fidel: ‘Cuba Has Been the Victim of Terrorism for Many Years’