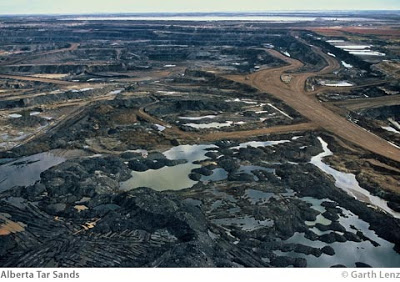 Reflections by Comrade Fidel: The Unjustifiable Destruction of the Environment
By Fidel Castro Ruz / December 15, 2008

Can the capitalist society avoid it? News about this issue are far from encouraging. The project to be submitted for approval on December next year in Copenhagen, where the new Convention that will replace Kyoto’s will be discussed and approved, is being currently analyzed at Poznan.

The Commission in charge of the drafting of this project is presided over by Al Gore, ex presidential candidate of the United States, who was fraudulently defeated by Bush in the elections of 2001. Those who are drafting the project are pinning all their hopes on Barack Obama as if he could change the course of history.

An enlightening example comes from Canada.

An article published by BBC World entitled “Canada’s Black Gold Oil Rush” points out that “the total area currently being mined is 420 Km2 , while the overall area that the Alberta government has leased to oil companies is 64 919 Km2. The area of exploitable reserves is 140 200 Km2 – about the size of Florida.

“From the air, the strip mines have transformed the forest into a moonscape of craters and lakes, with smoke stacks pumping out billowing clouds. All this in a remote part of northern Alberta.”

Further on, the article continues: “…There are three major players at the moment – Suncor, Syncrude and a consortium led by Shell – but more foreign investors and consortiums have piled in.

“…the lack of government action means not enough is being done about the cumulative effects on the environment.

“…an investigation by the Alberta Cancer Board is due to be published soon.

“Earlier this year, 500 ducks died after landing on a tailings pond run by Syncrude…A government investigation is ongoing. Whatever the results, it seems the pace of opposition to the oil sands is quickening.”

According to the Spanish daily “El País”, “… the estimates made by the dependent agency of the OECD (Organization for Economic and Cooperation and Development) are based on the predictions made by the IMF which point to a steady recovery of the global economy as from the second semester of the year 2009, when the world’s oil production will reach 86.3 million barrels per day.”

That same Spanish newspaper announces that “the director of the Department on Climate Change of China wants to state very clearly that Beijing would only limit its emissions in exchange for lots of investments and patents for clean technologies. His signature is indispensable so that all 187 countries gathered at the Polish city could move on to the adoption of a protocol that could replace that of 1997. Obama is causing a twenty years delay in the struggle against climate change.”

Another wire service from the agency NOTIMEX, dated on December 13, explains that “…the colossal fraud in Wall Street carried out by Bernard L. Madoff, ex chief of the firm Nasdaq, is causing losses in Spain amounting to millions”, according to an article published today by the newspaper “Expansión”, specialized in economic issues.

“…This Friday, one of the biggest scandals in Wall Street” –continues the wire service- “has been exposed after the ex chief of Nasdaq, Bernard L. Madoff, was arrested for having taken part in a fraud with an investment fund that could amount to 50 billion dollars.”

“…Madoff, ex founding president of the Nasdaq Stock Market, was arrested on Thursday evening after his own son reported to the federal authorities that his father was part of what he called ‘a huge pyramidal fraud’.”

“…Based on this scheme, only the first investors would obtain dividends from their investments, leaving all of the rest with losses that, according to the Federal Prosecutor’s Office in New York, could amount to the aforementioned figure.”

Another news published by Reuters on the same date stated that: “…President-elect Barack Obama is considering a plan to boost the recession-hit US economy that could be far larger than previous estimates”, the Wall Street Journal reported Saturday.

“…The final size of the stimulus is expected to be $1 trillion over that period, given the deteriorating state of the US economy.

“…Officials with Obama’s camp have declined to comment on media reports about the size of the boost that the Democrat will launch once he takes office as President of the United States on January 20.”

The picture appears to be even gloomier after the news by several press agencies reporting all sorts of problems, ranging from the bankruptcy of the automotive industry as a result of the crisis, up to the natural disasters, including the increasing cost of foodstuffs, starvation, war, and many other facts.

The problem is that there is no more habitable space on our planet. The only one left was Australia, and the United Kingdom took hold of it on January 19, 1788. There’s been a long time since the environment is compromised.

¿Could our species surmount that barrier?