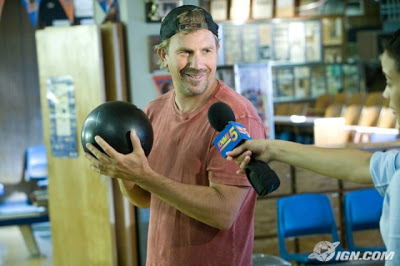 Kevin Costner in ‘Swing Vote’. Photo courtesy of Walt Disney Pictures.
What the new film tells us about the ’08 race, and why Obama needs to put Kevin Costner on his iPod
By Arianna Huffington / August 4, 2008

The makers of Swing Vote, the new film starring Kevin Costner, have pulled off a rare double play, producing a smart political satire that is also heartfelt and moving. It’s also a film that turns out to be remarkably relevant to the 2008 race.

Costner plays Ernie “Bud” Johnson, a beer-drinking, unemployed resident of Texico, New Mexico who as fate — and a voting machine error — would have it, will single-handedly decide a presidential election (sure, it’s high concept, but don’t forget that in 2000 New Mexico was decided by just 366 votes). The media descends on him, as do both presidential candidates and their win-at-all-costs campaign managers.

The film has lots to say about — and gets plenty of laughs from — the evils of modern campaigns: pollsters, lobbyists, focus groups, and the inevitable mudslinging and negative ads. The film features a bunch of satiric smear ads launched by the competing candidates — incumbent GOP President Andrew Boone (Kelsey Grammar) and his Democratic challenger, Donald Greenleaf (Dennis Hopper). You can see them here, here, here, here, and here.

But as ludicrous and over-the-top as the film’s negative ads are, none of them can hold a candle to the absurd ads unleashed last week by the McCain camp and the RNC.

Paris Hilton and Britney Spears? Really? David Hasselhoff? John McCain has been waiting his whole life to run for president and the best he’s got is Britney, Paris, and the Hoff? And Moses? Everything about the McCain media reeks of desperation — and a stunning disconnect from popular culture. Does the McCain campaign’s computers have Google software than can only go back to 2003? And the RNC’s ad ended with a riff on Leo DiCaprio in Titanic. That was 1997. When John McCain still had principles.

The film shows how, in their hunger to win, the candidates are willing to say or do just about anything — and chalk it up to the price of doing business. At one point near the end of the film, both candidates have crises of conscience. President Boone, disgusted at his own willingness to abandon his core principles to court voters — “dancing the dance,” as his campaign manager calls it — wonders aloud, “What are we about?” To which his campaign manager replies: “Winning. If we don’t win, you can’t do what you set out to do. And everything you’ve done won’t matter.”

But even the two campaign managers — who are the personification of cynicism — eventually admit the emptiness of that realpolitik rationalization. When one of them bemoans “the whole bullshit system,” the other reminds him: “We are the system. If it’s bullshit, it’s because we’re bullshit.”

Watching as these two fictional candidates completely lose sight of why they are running, and lose track of everything other than winning, I couldn’t help but think of McCain, reduced to voting against the banning of torture, and denouncing his own immigration bill.

In a moving speech before the film’s climactic final debate, Bud comes to terms with his own role in the degradation of our politics:

It’s sorta like somewhere along the way I checked out, and it’s not like I had huge dreams to begin with… I have never served or sacrificed. The only heavy lifting I have ever been asked is simple stuff, like pay attention — vote. If America has a true enemy, I guess it’s me.

It’s an incredibly tough scene to pull off — but Costner does it beautifully, giving flesh and blood to a man who has stopped believing that he can make a difference or that politics matters, and has simply given up.

Bud Johnson is a powerful stand-in for the 83 million eligible Americans who didn’t vote in 2004, and is precisely the kind of voter the Obama campaign should be targeting every day. Reaching America’s Buds is more critical than ever; if we don’t, and if the Buds keep turning away, disheartened and disillusioned, we will never see real change.

Instead we’ll see campaigns spending all their time courting the affection of fickle, fence-sitting swing voters. The kinds of people who could be influenced by the Britney/Paris ad.

So each and every day Barack Obama should roll out of bed in the morning and ask himself, “What can I do to get the real life Bud Johnsons of this country to check back in, to pay attention, to vote, to reconnect to the dreams they have abandoned along the way?” I recently suggested that Obama fill his Kindle and his iPod with the great speeches of RFK and Martin Luther King. He should add Costner’s finale to the mix.

I have a very small part in Swing Vote, playing myself. Talk about type casting. We filmed in New Mexico, in an arena. I was in a booth with Aaron Brown and Lawrence O’Donnell. There were laptops all over the set, and I kept pulling up the home page of HuffPost on each of them.

We filmed my scene all night. The producers had gotten me a hotel room, but I never even saw it. We kept shooting and I eventually just went straight from the set to the airport the next morning. In between shots, we would go to Kevin Costner’s trailer and sit outside under the stars while he played guitar.

I watched Costner film his big speech that night. And it was powerful. But not nearly as powerful as it is now, in the context of the current state of the race. So go see Swing Vote. Bring your cynicism, you idealism, and a box of Kleenex.