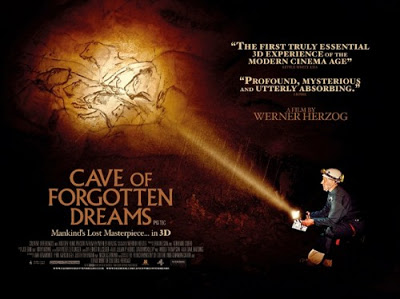 And it’s all in 3-D!
Werner Herzog, Second Street,
and the Cave of Forgotten Austin

I went to see Cave of Forgotten Dreams last night, the movie by Werner Herzog about the cave that was discovered in the Ardeche Gorge of France a few years ago. It’s the cave that features unmarred Neolithic wall paintings done in the Pleistocene Age. The movie is a 3-D jewel of sensitive movie making, but more important, it is also a thoughtful reflection on the state of humankind, now, 33 thousand years later.

The cave has reposed in silence for more than three millenia, sealed away with its secret cave bear bones, its dripping stalactites, its delicate crystal calcite depositions, and incredible renderings of horses, rhinoceroses, and mammoths.

The hypnotic voice of Herzog with his northern European accent set the tone for what is revealed as we are lured into the timeless void and the deep past through a tiny opening in the cliff face. The charcoaled figures are illuminated on the undulating surfaces of the limestone in ways that demonstrate the artists’ deep connection with the world they inhabited. The skill of the human hand or hands that applied the shapes to the wall rivals that of any modern day painter, but more important, the shapes capture a breathing essence of the creatures and moments in their lives. Below the drawings, on the cave floor, we see petrified animal bones sealed in pure crystalline calcite. They gleam and reflect in the flashlit darkness.

There are no human remains in the cave, nor representation of human forms, though the Sistine Chapel, the sculpture of Pythias, the terra cotta warriors of Xi’An all come to mind when looking at these walls as the shadows of camera lights play over them. Herzog comes in close, then takes us outside for some speculation and facts by the French caretakers, one of whom includes a very Gallic perfumier who appears outside the cave sniffing the rocks.

Just as the movie approached the point of being repetitious or too long, it was over. The credits rolled. I rose unsteadily to my feet and trudged out to the clanging modernity and angularity of Austin’s 2nd Street. 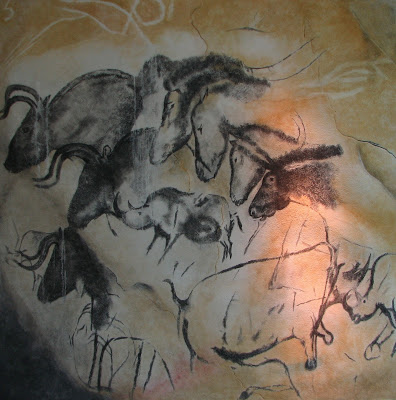 The span of human history isn’t something we think about very often, and indeed, as I emerged from the cave of the Violet Crown Cinema with its soft, first class airline seats, and mixed drinks into another of Austin’s latest “entertainment districts,” the contrast was so violent as to make it a jarring, psychologically-disturbing, experience.

I was suddenly mentally and visually assaulted by fashion, design, surfaces, human hubris and objects of commercial desire. I felt like the theater must have held me inside while all kinds of things had transformed around us. I had wandered out into a different era.

Somehow I found it hard to even say the word “we” when I looked at the crowds of young homo sapiens strolling past the sidewalk cafes and milling in front of the Mary Moody Theater (where the band “Widespread Panic” was playing for a second night).

The hard-edged architecture seemed to fit the sharply age-segregated crowd. Ninety-nine percent of the several thousand who were gathered in the street and leaning over the third floor balconies were between the ages of twenty and thirty with more males than females. But the ratio was close. Girls in sexy outfits and perfect hair, guys in shorts and flip flops, some in jackets and tee shirts. All stylized, looking like they were prepped for a photo shoot by a SoHo photographer’s assistant.

Backslapping, air kissing, high-fiving and a few hanging on the wall posing sullen and distant. None seemed drunk or overly bellicose. Mindless good spirits, youth mixing with itself. Not an old person in sight, except for me. I wondered how all those kids would be behaving if someone had dosed their drinks with LSD? It was just a random thought.

I plowed through this throng with my “age force field.” The youth detected me and magically parted to make way for the older gentleman, except now and again where some callow fat kid didn’t notice my distinguished bearing and mistook me for one of his own. (“Oh, excuse me sir.”) And then he shrunk back with a smirk at his own unfathomable wit.

Big truck rigs and two-band busses idled their diesel engines behind the theater. Shiny as firetrucks they were.

I was mixed in this bunch, and I marveled at the street where I used to walk in Austin, my home since the fifties. There, under that glittering boutique’s facade was the ground where Liberty Lunch once stood, where I saw a young John Hiatt, a cowboy attired k.d. lang, Doug Sahm in a long duster playing with Augie and Freddie, the Superior Dairy with its huge milk carton, railroad tracks in the street, a boxcar on a siding. The only reminder of the past was the brick building where Lambert’s BBQ now stands, the Schneider Building that housed the old Calcasieu Lumber company. I am old enough to have driven trucks into the lumber yard that stood behind and alongside this building. 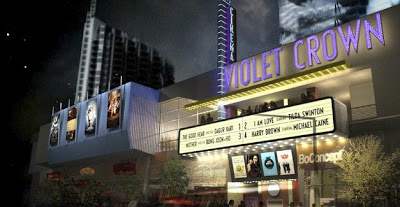 Violet Crown Cinema and Austin’s Second Street District. Image from A.V. Club, Austin.
People stepped without a thought over the dust of those days that lie under this smooth clean pavement. There was a smell of pasta and BBQ in the air. A new Lexus hummed down the street. And I thought of the Cave of Forgotten Dreams and its whiff of the Pliestocene. A long sharp needle point stuck out of the roof and over the street of Austin’s City Hall and Municipal Building looking like a dagger or maybe a stalactite gone horizontal? Architecture with a point, literally.

I walked further, down to West Fourth Street where there were more happy crowds, but I also saw what was left of the warehouses where I used to come to pick up sheetrock and plumbing parts, and later where little theaters presented local plays and one could park at a meter for a nickle. I went further and turned onto Congress where I stopped in front of 316, the W.B. Smith building. It was once also known as the Vulcan Gas Company [a legendary Austin music venue].

I took out my camera and photographed the nameless office that now occupies the space. The photo will look like nothing to anyone but me. I wonder if it will be occupied by a CVS Pharmacy soon, or perhaps an ice cream vendor… or maybe it will become covered in calcite and a flashlight will drift over its gleaming surface and people will wonder if there are bones inside.

Where now Lightnin’ Hopkins, Bubble Puppy, Big Mama Thornton, Stevie Ray and Texas Storm, The Jomo Disaster? Where are the Snows of Yesteryear?

Where is Echo, beheld of no man?

[Bob Simmons is a veteran broadcaster with over 30 years experience in most aspects of radio. He is a graduate of the University of Texas and presently lives in Austin where he has business interests and pursues his longtime avocations of photography and video production. Read more articles by Bob Simmons on The Rag Blog.]

1 Response to FILM / Bob Simmons : The Cave of Forgotten Austin