FILM / Casey Hayden : ‘The Help’ is a Game-Changer 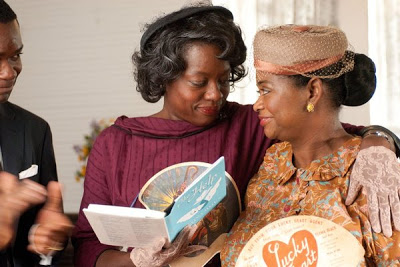 Viola Davis and Octavia Spencer in The Help.

The play’s the thing:

The Help, and fighting the good fight

Davis’ amazing, game changing work has made me proud to have been part of a Movement which made it possible for her performance to appear on the big screen.

[The Help is a 2011 film adaptation of Kathryn Stockett’s 2009 novel about a young white woman, Eugenia “Skeeter” Phelan (Emma Stone), and her relationship with two black maids, Abileen Clark (Viola Davis) and Minny Jackson (Octavia Spencer). Skeeter is a journalist who decides to write a controversial book from the point of view of the maids (known as “the Help”), exposing the racism they are faced with as they work for white families. The film is set in 1963 Jackson, Mississippi, in the early days of the civil rights movement.

The Help has been a big popular and financial success and has received mostly positive reviews, especially for the powerful performances of Davis and Spencer, though it has stirred up some controversy, with a few critics calling it “condescending” and “cliched” and suggesting that it “flattens history.” Directed by Tate Taylor, The Help also stars Bryce Dallas Howard and Jessica Chastain.]

I didn’t read the novel, The Help. I generally avoid books about topics which I think I know a lot about and to which I am for better or worse emotionally attached, like race, alcohol, folks I know. The books don’t match my experience and leave me annoyed.

For me, the play’s the thing. I grew up with Hollywood, going to the Uptown Theater in Victoria, Texas, after school because that’s where Mom worked for a secretary’s salary on which she supported me and my sister. I saw Viola Davis last year in Doubt and she stole the whole show with one scene. I had to see her again, and that’s why I saw The Help.

I am not engaged in identity politics and it doesn’t matter to me who wrote the script, whether it is about the civil rights movement per se, whether it is timely to talk about social roles which have vanished from our culture, whether in fact those roles have vanished and whether that is good or bad, whether white women are oppressed or black women are angry, if a white woman helps out black women or doesn’t, how black men are portrayed or not portrayed, whether the historical setting of the era is accurate, whether The Help is too sentimental or too irreverent or good or bad, or if I am politically correct.

Davis’ amazing, game-changing work has made me proud to have been part of a Movement which made it possible for her performance to appear on the big screen. I wouldn’t have missed this movie for the world.

Black women like these in this movie were the backbone of the Movement in the South. They, and not we, were the real heroines, walking to work in Montgomery and sharing their government “commodities” with us at the Freedom Houses and showing up in the heat and fear to sing the songs at the church meetings.

They were there when we got there and there when we left. Their spirit was the spirit of the Movement. Like Mae Bertha Carter of the biography Silver Rights, they taught love, not hate, because it feels better to love than to hate.

The black female artists of this theater piece have, through their perfection of their craft, embodied the value and beauty and strength and agency and poignancy and careful revolt of these, the oppressed, in their own setting, as they go about making something out of nothing, surviving through racism and heartbreak through loving in spite of it all as a survival mechanism.

I was happy to see these ordinary women, whom I have so long admired and honored, and to experience again the joy of fighting the good fight with courage in the face of fear.

When I saw The Help, the audience sat in silence through the credits at the end as Davis exited, honoring her character. This movie will change the way race is played out in pop culture and perceived in this country for the better. It is a win for us, and by us I mean old Movement vets, not white women.

Cicely Tyson in two short scenes is alone worth the price of admission. The play’s the thing. Be there or be square.

This article was originally written for the Veterans of the Civil Rights Movement website. 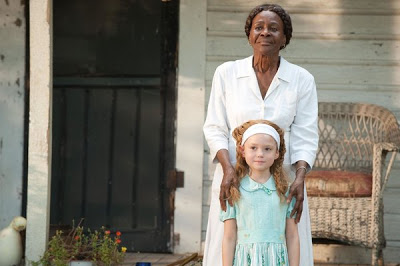 Cicely Tyson in The Help.